Special relativity: when can we say in our good own right that something happened before something else?

I am studying "Introducing Einstein's Relativity" (D'Inverno, Oxford University Press) and I am trying to understand Fig.2.12, page 23. There it goes: 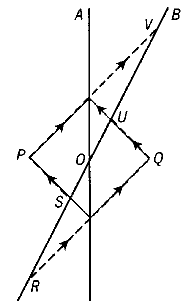 The book says explicitly that B "sees" Q before P because t(R) < t(S).

I am willing to believe the book, but can anyone explain to me why t(U) < t(V) isn't a good argument?

What further troubles me is that on the same page 23 the book places Einstein's image of the train with the two light bulbs. My understanding of that experiment is that indeed the moment of light reception is relevant to convince B that the bulb at the head of the carriage was switched on before the one in the back of the carriage.

So, it seems to me that the author could have used either inequality.

For the bulbs in the train, it seems like it is a practical consideration that the reception events convince observer-B. (Presumably, Observer-B could have done radar measurements [with transmissions and receptions] before the meeting at event O to conclude that he is in the middle of the train.)

In a sense, you're correct that observer B sees Q before P because the light ray from Q arrives before the one from P. This is the way things work most of the time, after all: we see things by receiving the light from them, so it makes sense that we judge time ordering from the order of reception.

The problem is that in relativity we tend to use the word "see" in another way. We assume that the observers have a good knowledge of electromagnetism and therefore they know that light travels at a finite speed; therefore, they can correct for this.

Let me give you an example. Suppose we look at the sky, and we observe that star A goes supernova, and one hour later we observe star B going supernova (I didn't say this would be a realistic example!). It seems to us like star A went supernova first. But if we know that star A is 1 light year away while star B is 100 light years away, it's clear that in fact star B went supernova first - it's just that its light took longer to reach us. So in the literal meaning of "see" we see star A exploding first, but in the physics-meaning of "see" we see star B exploding first.

Getting back to your question, in the physics version of "seeing", B sees Q before P. Maybe a better way of putting it would be to say that in the frame in which B is at rest, Q happens before P. But I disagree with the book in that it's because $t(R) < t(S)$; I say it's because $t(S) < t(U)$. See my modification of the picture: 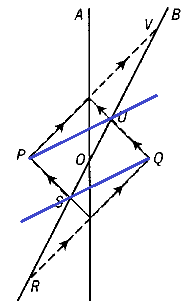 I hope this answer helps.

7
What is the formula for the relativistic ellipse?
1
K-factor in special relativity
0
Firing counter-propagating photons inside a moving train
2
Time lines of observers meeting each other - doubts about their graphical representation
1
Special relativity: did Einstein's train passenger know his own seat number?
1
Is Relativity of simultaneity just a flaw in perception?