How to calculate the moment of inertia of a Möbius strip?

Well, I was thinking about how to calculate the MOI of a Möbius Strip. But it's very difficult (seems to me) to find a symmetry in this scenario.

Edit: (Some people have commented to add some details about the strip.) The strip has mass M, width b , length a and uniform arial mass density. I want to calculate the MOI from any axis in which the mathematics is easy.

WARNING : I am not convinced that my answer below is correct.

I have followed the tilted sticks definition of the Mobius Strip given by Herman Jaramillo in answer to the cited Mathematics SE question $^1$. However, I think that this definition does not conform with the definition of a paper strip joined with a half twist. The sticks are closer together where the ends tilt inwards and further apart where the ends tilt outwards; as a result the strip varies in density. This cannot happen on a paper strip, which maintains its density. It cannot expand or contract anywhere : parallel lines ruled across the width of the flat, pre-twisted strip must remain parallel (ie the same distance apart at all points) after the strip is twisted, when measured along the surface perpendicular to the lines.

One consequence is that the mid-line of the twisted strip is not a plane circle. Stresses force the mid-line to bend out of the plane into what looks from the side like a figure-of-eight. Furthermore, I suspect that the exact shape differs depending on the aspect ratio $a/b$.

CONCLUSION : My definition of the Mobius Strip is only a poor approximation to the real thing. 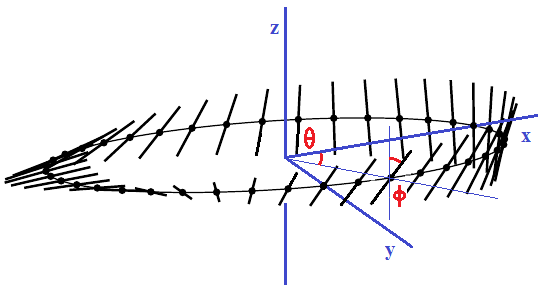 The MI of each stick about an axis through its centre parallel to the z axis is $I_0\sin^2\phi$ where $I_0$ is the MI about an axis through its centre perpendicular to the stick $^2$. The MI about the z axis is found by applying the Parallel Axes Theorem. The MI of the whole figure is found by integrating around the circle, ie through all tilt angles from $\phi=0$ to $\pi$.

1 Understanding the Equation of a Mobius Strip
2 What is the moment of inertia of a cylinder about a skew axis?

Not the answer you're looking for? Browse other questions tagged homework-and-exercises moment-of-inertia or ask your own question.