Yesterday I posted a question and, between the comments, I noted this:

I wrote: ok, but for example can a blue laser and a violet laser interfere? I think that there isn't much different between their wavelenghts

The answer: Yes, in theory, there can be an interference pattern between them, but this is highly theoretical. Keep in mind that the coherence length of a common laser pointer isn't usually much more than 10cm and the wavelengths in that vary by only about 10 to 20nm. If you mix blue and violet, you probably wont see any interference patterns more than a millimeter or so from where the waves mixed. As I said, it's possible but extremely difficult

I wrote: Blue laser and violet laser encounter only in one point for cycle, so we don't notice the interference. But if I take two blue laser, I'll see the interference because the waves concide. Is it right?

The answer: If I interpreted you correctly, then yes, that is correct

So I image that the bold text is something like this: 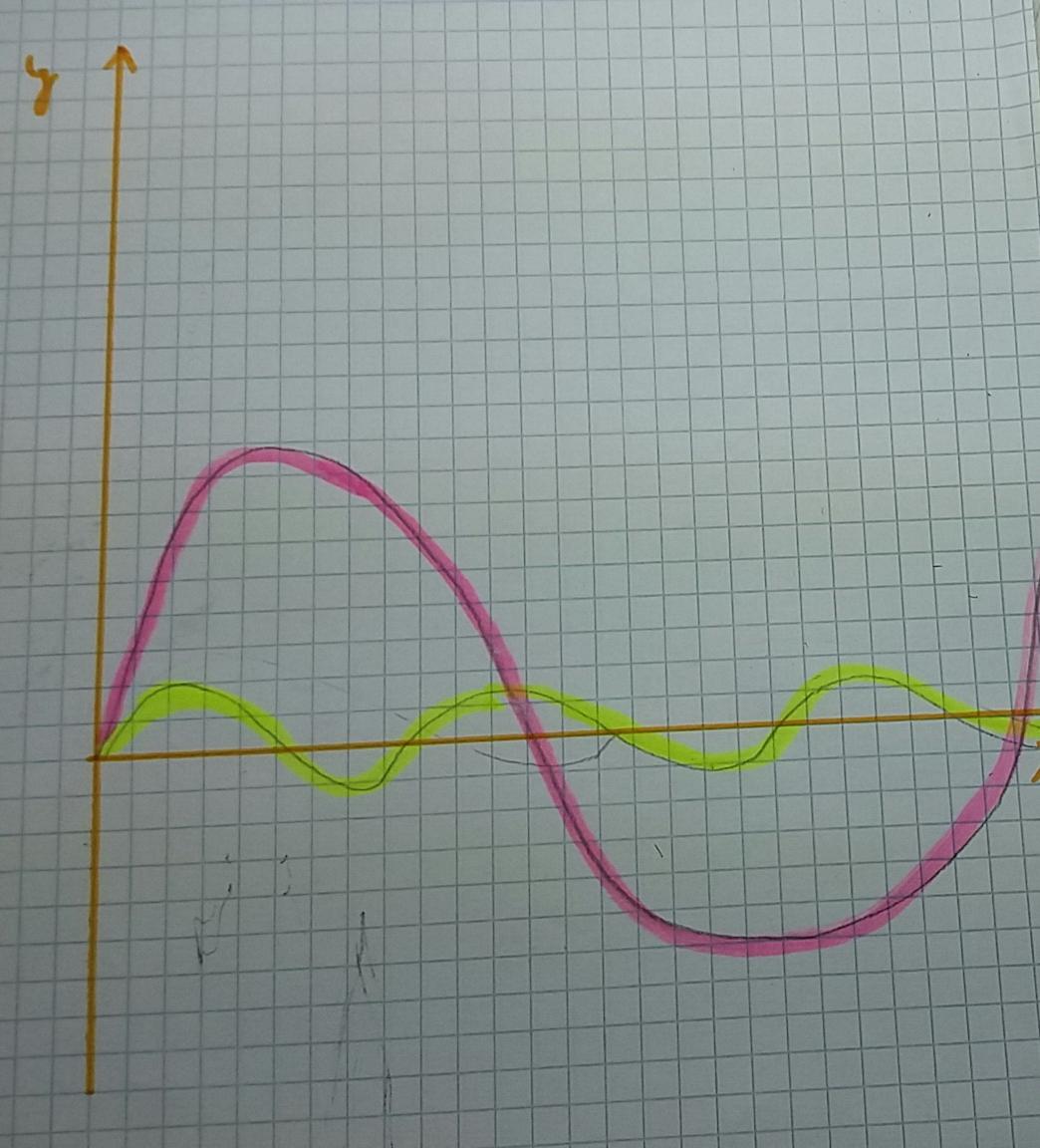 The waves, which have different wavelenghts because they are different, encounter only in two points in the image, so there is interference but it isn't very visible.

But now I'm thinking that also the destructive waves, which have the same wavelenght because they are the same waves,encounter in only two points: 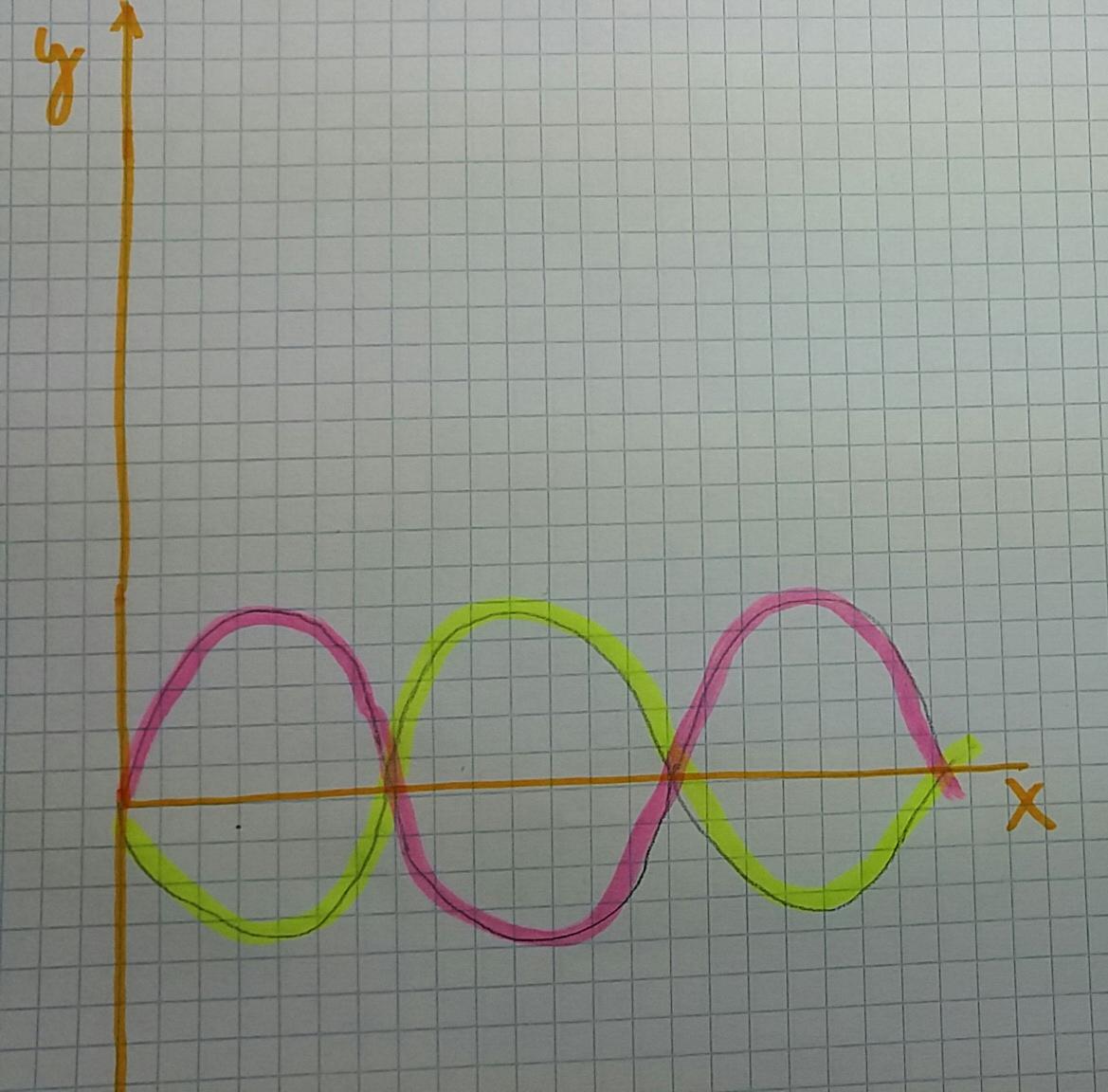 And this waves interfere a lot between them, in fact they annul. Why don't the first two waves make a visible interference? Why don't they annul or interfere? Does this mean that the bold text isn't right? Is it due to the different wavelenghts?

A key feature of waves is that they move in both space and time. The reason destructive interference is so interesting is that, at certain points in space, the equation for amplitude is 0, independent of time. For those points of destructive interference, it doesn't matter what phase one beam is in, the other beam is always exactly 180 degrees out of phase with it, perfectly canceling it out.

By notating it this way, we can see some common factors. when $x1-x2$ is a multiple of $\frac{\lambda}{2}$ (i.e. there's a half-wavelength difference in their path lengths), then we see the two sine terms are always exactly $\frac{\pi}{2}$ out of phase or exactly in phase. This is true regardless of what $t$ is. This means that at these points, you have either maximally destructive or maximally constructive interference.

There is a highly related concept called "beats," which occur when two signals which are close in frequency interfere in time. They interfere in a way that's similar to the spatial interference you are looking at, but they do it in time. It's most noticeable in sound waves. If you have two frequencies which are close together, say 5000Hz and 5005Hz, you will hear them pulsing at the difference between those frequencies (in this case, 5 Hertz).

In your example, blue and violet do interfere this way, creating beats. However, those beats are in the 10-20THz region. This is way too fast to see pulsing directly, but far too slow for our human eyes to detect it as a photon... That happens to be in the microwave region!

I think the point you're missing here at the moment is that these waves are both sinusoidal waves, and their interference pattern will simply be the algebraic sum of both waves. On the second sketch you posted, it's not that the two waves only meet up at two points during any given period and cancel the whole wave out. Instead, notice that at any point along the pink wave, there is a negative "copy" of it which resides on the yellow wave. As such, when we add both contributions up, the net result is zero. This happens for every point along the wave on your second drawing, and would be called destructive interference.

Your first sketch is obviously different. Here, it's not as obvious what the resulting curve will look like, but you can figure out what the sum of the two waves will be at any given point by adding each of their $y$ values. I took a moment and graphed two waves that are similar to yours on Desmos, and then in orange you can see what happens when you add both waves together. The resulting orange wave is the interference pattern. You can check it out here.

Not the answer you're looking for? Browse other questions tagged waves electromagnetic-radiation acoustics interference or ask your own question.

9
Which is the biggest object which can interfere with itself?
0
Explanation of Interference of Electromagnetic Waves
2
Is double slit interference due to EM/de Broglie waves? And how does this relate to quantum mechanical waves?
1
Acoustic beats interference vs. path difference interference
2
Contrast between sound waves and light waves
1
Why do cylindrical waves create an interference pattern (and sphericals do not)?
0
How do radiowaves have constructive/destructive interference?
1
Noise Cancellation - Destructive Interference