What is the force that pushes a car upwards when moving on a banked road?

What is the force acting on the car that accelerates it up or down with respect to ground or in the inertial frame?

Without invoking centrifugal force, this can be explained in the following way: Imagine the car is travelling on a circular path at a particular velocity. Instantaneous velocity at any given time would be tangential to this circle. But, gravity is bringing the car to travel in the circular path of the equilibrium radius. Now, if you speed up the car a little bit, the car will try to drift away from the circular path (in the path tangential to it) as the acceleration due to gravity is not sufficient to make the car follow the circular path of the initial radius. As an effect, the car may find a circular path of a slightly larger radius as its equilibrium path of motion. Now since the radius is larger, the car needs to take a less sharper turn to follow the new circle and hence acceleration due to gravity will be sufficient enough to keep the new path of a large radius. 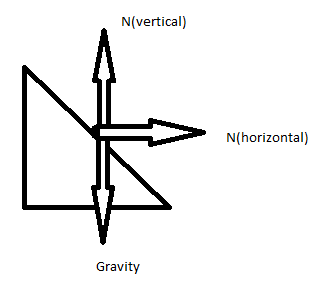 $N$ is the normal reaction force by the road. In order to perform circular motion, the $N_\mathrm{horizontal}$ force must provide the centripetal acceleration.

If you increase your velocity, the horizontal component of the normal force must increase so that the car keeps doing circular motion. This is the condition imposed by the road. But, Normal force is always perpendicular to the surface. So, $N_\mathrm{vertical}$ must also increase such that if the angle of incline(not shown in the figure) is $\theta$,

As $\cot \theta$ is constant, the vertical force must increase in proportion with the increase in the horizontal force.

${N_\mathrm{vertical}}$ is the force which makes the car go up.

You cannot increase the speed of the "Car" by pressing the accelerator of the car. To increase its speed, you should either place an already moving car with the required velocity or attach something like a fan or rocket booster behind the car to increase its speed.

The track or road is circular. So, as soon as you increase the speed of the car by some mechanism, the front part of the wheels or the car will strike with a greater force to the curved surface resulting in greater normal force.(Remember that the velocity of the car on a frictionless road is not related to the angular velocity of the wheels.)

The radially outwards seeming force would be the force applied to increase the velocity of the car. See the image 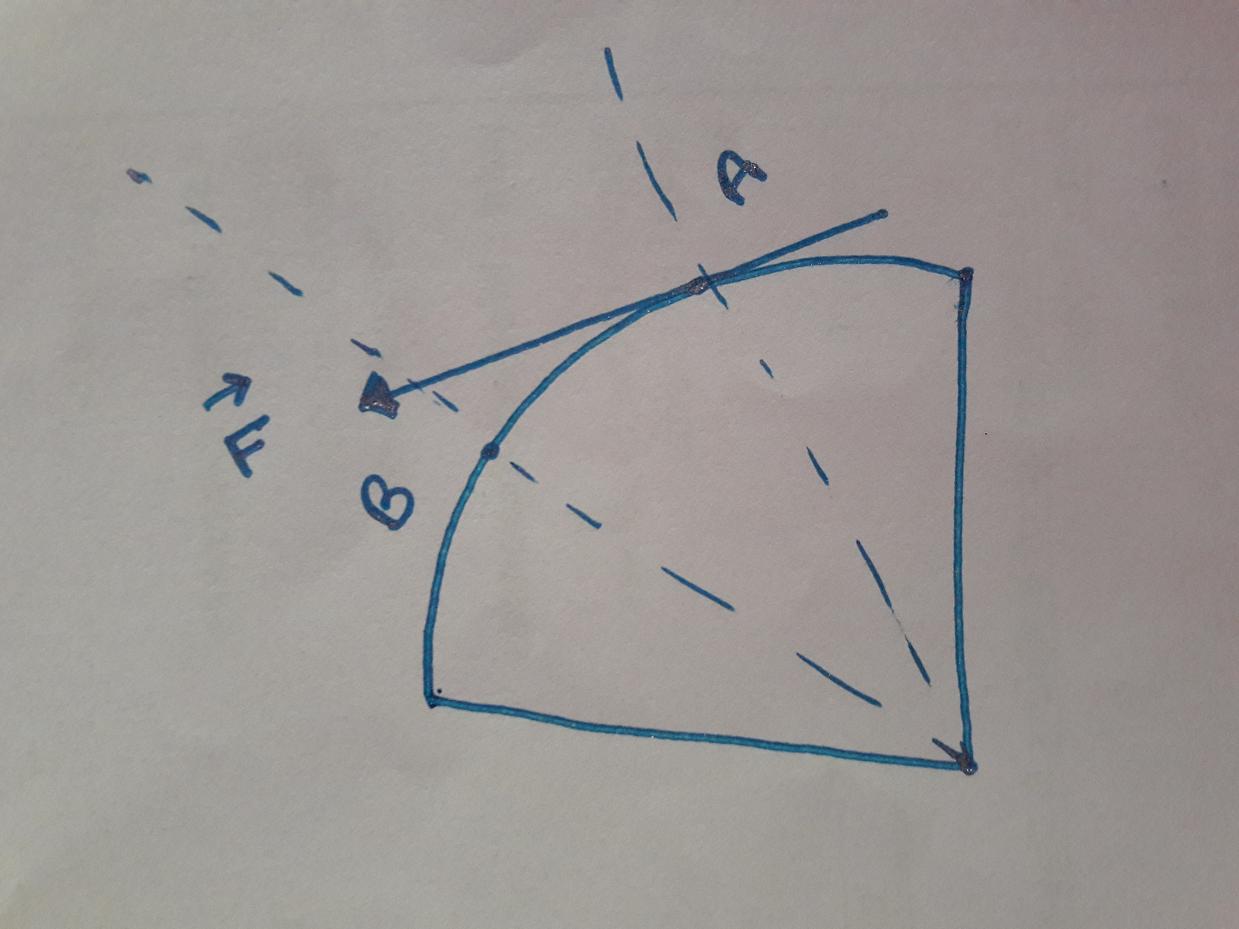 If the force is applied at $\mathrm{A}$, coming near $\mathrm{B}$, the force will have a component along $\mathrm{OB}$. This will increase the normal force which in turn will push the car upwards. $\mathrm{O}$ is the centre of the circle of the banked road(sorry, I could not include that in the figure.)

The force pulling the car down is gravity, or rather the component of the gravitational force which is parallel to the road:

where $m$ is the mass of the car, $g$ the gravitational acceleration and $\phi$ is the angle between the banked road and horizontal ground.

In the absence of gravity, because of Newton's first law (inertia), the car would try to move in a straight line. This effectively pushes the car away from the center of the circle. This is perhaps easiest to recognize if you consider some extreme cases like $\phi=0$, where the car would just go in a straight line or the other extreme, $\phi=\pi/2$, where you can get a circular closed track depending on the direction of the velocity. For intermediate values of the angle, you would get spirals moving up along the conic surface of the track.

Of course all of this is much easier to discuss in a non-inertial rotating reference frame where you have a centrifugal force which is a result of inertia as discussed above, and which is pushing the car up along the track:

where $v$ is the velocity of the car and $r$ the radius.

In order for the car to drive at constant height, these forces have to be equal. From this you see that for a given track (given $\phi$) there are many solutions $(v,r)$ for $v^2/r=const$: you can do small circles at the bottom of the track at lower speed or large circles at the top of the track at higher speed.

Apparently the time to complete a loop, $T\propto \frac{r}{v}\propto\sqrt{r}$, so small circles should give you faster lap times.

Imagine swinging a bucket with water in it around you on a rope. The faster you turn the higher up the bucket will get from the ground. This is because the bucket wants to go in a straight line but the rope prevents it. The rope has a component of force in the upward direction, the straight path of the bucket is countered by the rope forcing it into a circular path. The faster you turn, the harder the bucket wants to go straight this is translated into movement up or down depending upon your turning speed.

The curving road replaces the rope with the surface of the road that is pushing up instead of being tension.

If the slope is frictionless then there are two forces acting on a car, the weight of the car downwards on the force on the car due to the slope which is at right angles to the slope and called the normal reaction.

For a speed of the car $v$ and radius of the path of the car around the corner $r$ you can find that they are related to the angle of banking $\alpha$ by the equation $v = \sqrt {rg\tan \alpha}$.

The force necessary to produce the centripetal acceleration $\frac{v^2}{r}$ is provided by the horizontal component of the normal reaction.

If one wants to keep the radius the same when the speed of the car changes i.e. Change the centripetal acceleration the net inward horizontal force on the car has to change.

That can be done by having a frictional force acting on the car.

What makes the car go up and down the slope is the centrifugal "force". I have put the word force in quotes, because it is not a real force, but rather an apparent one.

What causes the centrifugal force is inertia. The car wants to go in a straight line, but it is prevented from doing so by the friction of the tyres and/or the slope of the road. This is the same force as the one you feel when you swing a weight at the end of a string: the weight wants to go in a straight line because of inertia, but the string keeps it going in a circle. The only real force is the one you use to stop the weight from flying away.

If the centrifugal force gets too strong (the car is going too fast around the curve) then the wheels can no longer keep it on its path and it slides outwards, towards the higher end of the bend. If the bend gets steep enough near the top, the car will find a new equilibrium point. Similarly, if you slow down, the equilibrium will be at a less steep part of the bend.

In case you think that it's weird that the centrifugal force is not real, there are other forces that are equally "unreal". One example is the Coriolis force, which creates cyclones and hurricanes. It is caused by the earth rotating, while the air mass wants to follow inertia and go in a straight line. If you're being blown away by a hurricane, remember that you're just being pushed by inertia. But you'll land just as badly at the end ;-)

Not the answer you're looking for? Browse other questions tagged newtonian-mechanics forces reference-frames friction inertial-frames or ask your own question.

2
Turning on a straight, unbanked, frictionless road
1
Question about a car on a banked turn with no friction
2
Consistent method for finding direction of static friction
4
Friction of a Car in Motion
2
What would be the equations of motion in this case of initial & final rolling on a ball in an accelerating car
0
Motion of a car on a banked road
-1
Will friction on tyres due to road still act if the vehicle is moving with constant velocity?
0
Circular motion and banked roads question