Which would melt faster on the sidewalk, equal volumes of snow or ice?

Whilst walking back from class, I noticed the piled snow on the sides of the street still hadn't melted after a week despite it being sunny and generally warm $(15°C-18°C)$. "If that snow was ice, surely it would've melted away by now", I thought. I couldn't figure out what would melt faster on the sidewalk; the piled snow that was somewhat impacted, or the same volume filled by solid ice at the same temperature. 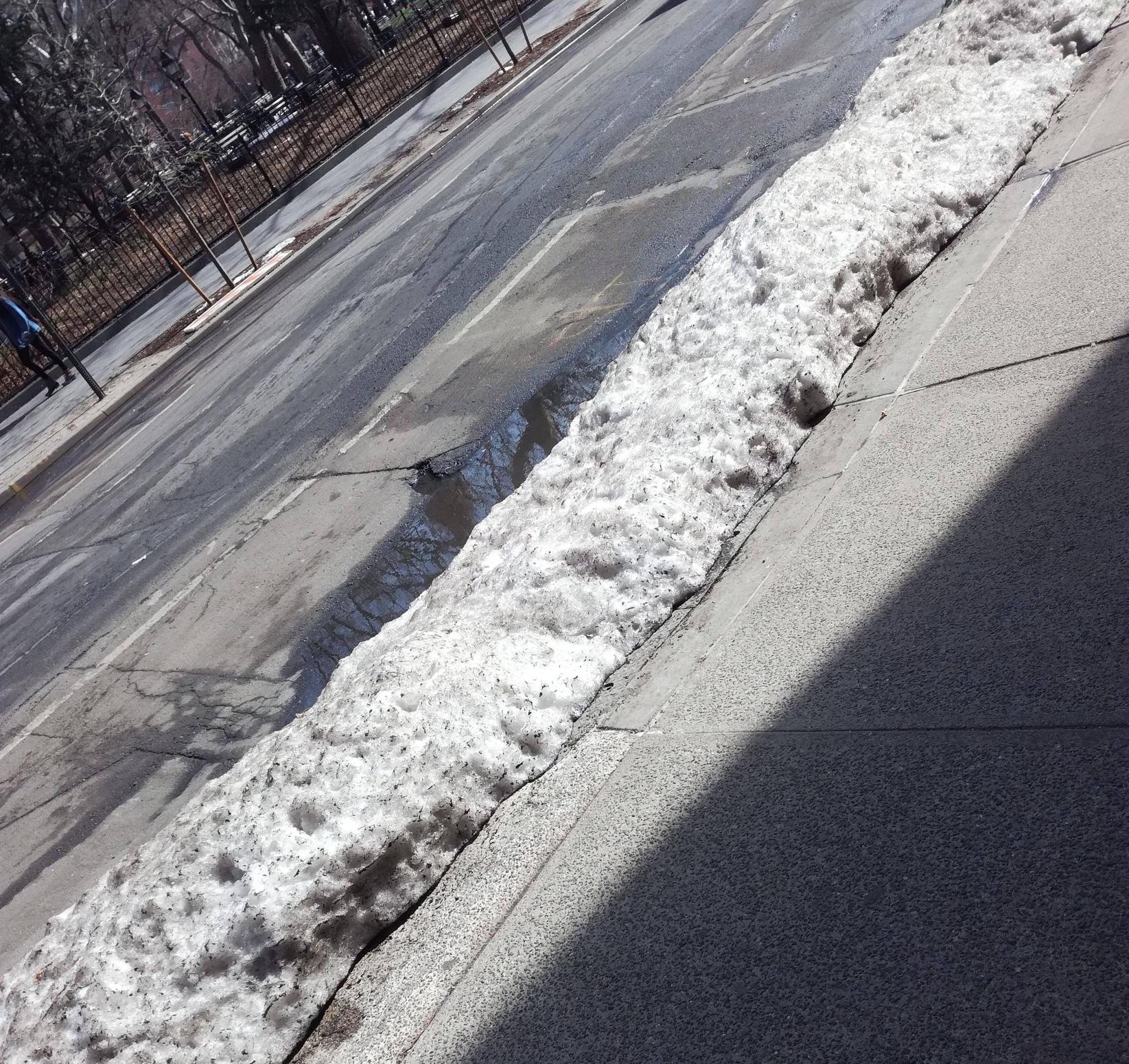 My thought-process was that the snow had pockets of air acting as very good insulators that would slow heat transfer even though the solid ice has a "bigger tank" for heat and needs more of it to fully melt. Ice is a much more solid structure though, allowing for far better heat conduction (via microscopic vibration) and has more of itself in contact with the ground. Snow is also shinier than ice, reflecting more sunlight. I know that there are several types of snow and this one is packed powder, with a crust that can support someone walking over it but crumbles if stomped on. The inner parts are powdery and the edges are coarse, crunchy and wet. How dirty the snow is also plays a part (since dirt has a much lower heat capacity than ice and absorbs radiation better).

This is a close-up of the snow. 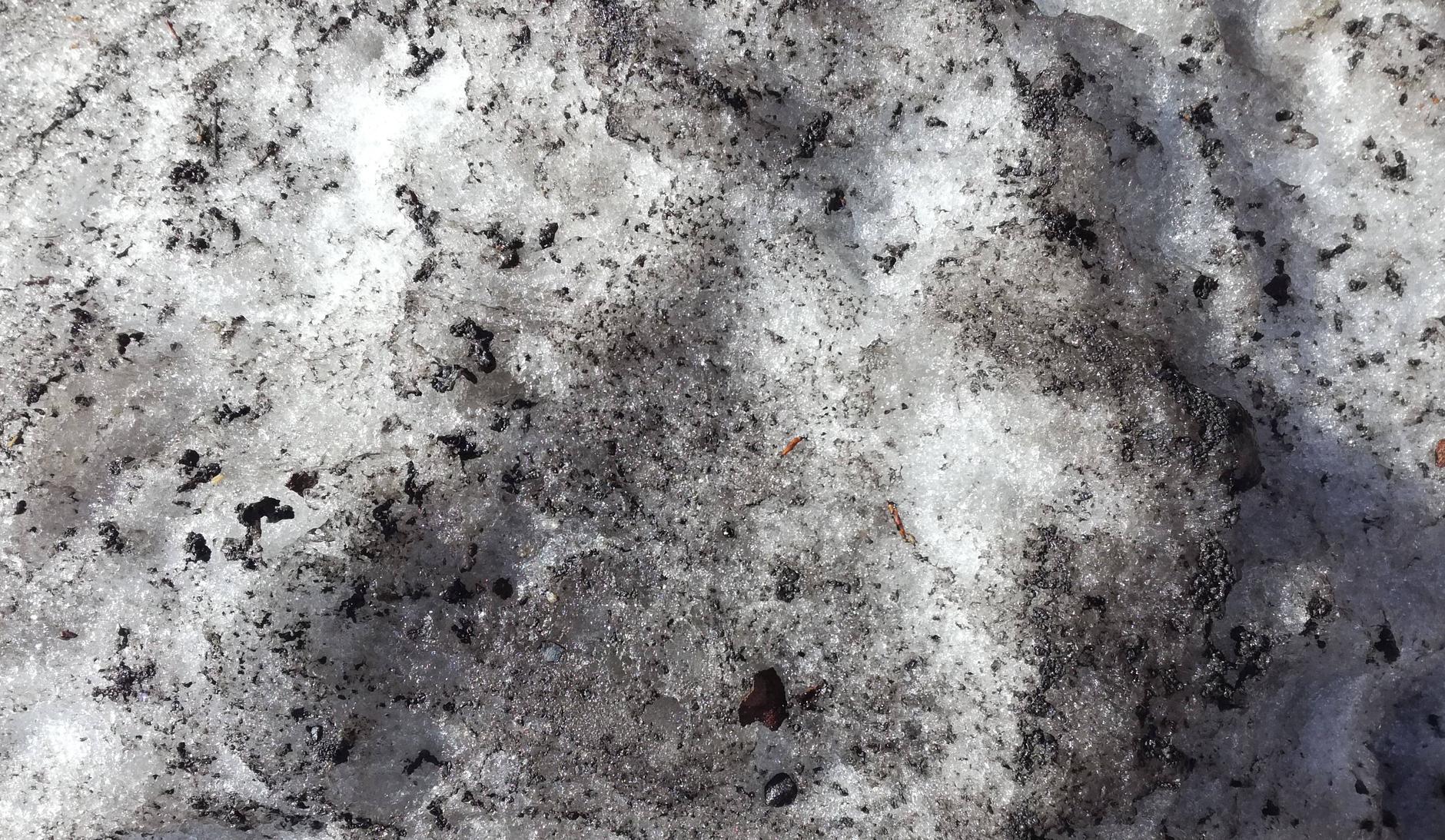 Would replacing that volume with solid ice at the same temperature last longer than the snow ? My intuition says the snow would last longer but I don't know which contributing factor dominates.

The air in the snow does lower the thermal conductivity - but that just means that the little heat from the air can melt the outer layer of snow without having to worry about the effect of snow "deeper inside".

In my experience a significant factor in snow melting is the presence of dirt - small dark particles that absorb energy from sunlight. "Clean" snow reflects much of the sun's power while clean (solid) ice will absorb a larger fraction of it. This is a factor that matters more for snow in the presence of sunlight - it doesn't affect snow in the shade where only the heat from the air plays a role- and that is what I believe you were asking about.

(1) A given volume of ice contains a greater number of water molecules than the same volume of snow. Sum all energy required to bring each molecule to melting point and you find greater total energy required to melt the ice than the snow, as Floris said in his answer. BUT, as the Sun's energy striking the surface is the same for both ice and snow, and will not be depleted (for practical purposes), regardless of the total amount absorbed, the rate of energy transfer to and through ice and snow becomes the important factor. For ice to melt faster than snow, more energy per unit time needs to be transferred into the ice.

(2) The surface will be at the triple point of water. Some water will melt, and some will evaporate. Water that evaporates uses energy that otherwise would be available for conduction through ice and snow. But neither sublimation nor evaporation will reduce the energy per unit time delivered by the Sun to the surface. As energy delivered per unit time will not decrease, heat of evaporation and latent heat of sublimation should not affect the rate of heat transfer into ice and snow. But the rate of evaporation will be greater per unit volume of snow than ice, as there will be greater surface per mole.

(4) Air convection through snow probably is insignificant, as snow is an insulator. Radiant energy delivered to and through the surface, and water convection via surface water seeping to the interior, may be the dominant methods of heat transfer into ice and snow. As snow is more porous, I expect convection via water seepage to be more rapid in snow than ice.

In favor of snow melting faster: a) Greater surface area per mole for evaporation, b) Greater porosity per mole for water seepage to transfer heat to interior of snow.

In favor of ice melting faster: a) Radiant energy can penetrate the clear surface of ice directly to the interior.

As an experimental physicist, of course my first suggestion is to find a freezer with frost stuck to the walls and test it by cleaning it out, but other than that:

The main thing I can think of is that once surface snow melts, it can drip through and transfer heat further down. This is why you'll see melting snow that looks like towers of icicles - something dark gets blown on top of the snow, it absorbs sunlight and heats up, melting some snow around it, which then drips down and melts snow beneath and makes the chunk of dark stuff drop down and the process continues. This isn't possible in ice, especially since the chunk of stuff will end up sitting in a puddle of water that will also insulate it from the ice. I think this process, combined with the much smaller mass, will make snow melt much more quickly.

Ever made a snowman ? Quite easy to pick up that ball of snow for the upper body wasn't it. Can you imagine how heavy the solid ball of ice the same size would be ?

So, same volume but much more solid water. All things being equal much more heat energy required to melt a ball of ice compared to a ball of snow. Hence snow will melt faster. But all things are not equal are they, snow looks different to ice, much whiter, so if sunlight (radiation) is doing a lot of the melting then clean snow is going to absorb less heat per surface area than clean ice. Also we have conduction from the ground, a sheet of ice is in really good contact with the ground, snow less so. Can we work it out ? Maybe but its going to be complicated, need to take into account source of heat, type of heat (conduction, radiation ), reflectivity of surface and so on.

My money is on the snow going fastest for SAME volume.

Not the answer you're looking for? Browse other questions tagged thermodynamics everyday-life thermal-conductivity ice or ask your own question.

3
Why is this ice so stubborn?

2
How do I calculate the curve of a parabolic mirror to melt the ice from my street gutter?
5
Why does an increase in pressure raise melting point?
3
Do sodium chloride(ions) melt the ice or not?
2
Ice melts slower in salt water?
34
Why does snow stay after a snowfall?
1
Running vs. walking in slippery condition
41
Why do small patches of snow remain on the ground many days or weeks after all the other snow has melted?