Is there a synonymous or parallel equivalence for charge as there is for mass and energy? [closed]

I've read in multiple places that electric charge is absolutely indestructible (although I am aware that charge-carrying particles can be destroyed and created) and that the total amount of charge of the universe seems to be zero. Although there is an energy-mass equivalence, is there a corresponding charge-$X$ equivalence?

While I've seen some charge-energy equivalences, those seem more like cases of conservation of four-current to me because they involve moving the charge in electric fields. There also seems to be a charge-mass equivalence but it's just a roundabout play on the inertia of stress. Correct me if I'm wrong but none of these are quite like how mass and energy are interconnected.

Are there any other properties that are equivalent in the same way mass and energy is?

Charge is a less awkward and probably more useful notion than mass. This is because the former is always conserved, and is linear additive in the sense that the charge of a composite system is exactly the sum of the charges of the system's constituents. See Anna V's excellent exposition here.

Neither of these two properties of charge are true for mass: they are only approximately true in everyday things like chemical reactions where energies released are very small compared with the total energy of the system.

The only really useful notion of mass that remains in modern physics is that of rest mass of a system, which is simply the system's total energy when measured from an inertial frame which is momentarily comoving with (at rest relative to) the system. If the system has relatively moving constituents, we define the relatively-at-rest frame as the one wherein the system's 3-momentum vanishes. If there is no such frame (as for a unidirectional light beam, or other object moving at $c$), then the system has zero rest mass.

So mass has become a very secondary notion to the more "primary" notion of energy (which, like charge, is always conserved and linearly additive, at least in flat spacetime when measured from a consistent inertial frame). It can be thought of as wholly derived from and dependent on the energy notion.

It's interesting to take heed that mass is a secondary notion in the proposed SI definition whereas the elementary charge is considered to be a fundamental constant of Nature.

The one "conservation" (actually an "invariance") that make rest mass useful is that it is the length of a system's momentum four vector $(E,\,\vec{p})$, i.e.

so that it does not change under the action of a Lorentz transformation. We also do relativistic dynamics through a Lorentz-covariant version of Newton's second law $F^\mu = \mathrm{d}_\tau p^\mu = m_0\,\mathrm{d}_\tau v^\mu$. Again we meet the rest mass $m_0$ as the scale factor relating four momentum and four velocity.

Your fourth and fifth paragraphs are particularly illuminating to me, it sounded "fundamental" in my head that charge had no such equivalence as in mass's case although my phrasing was bad. Putting it in energy terms makes more sense.

There are many questions like yours on this site and they are all (I don't mean this as a criticism - I think this is a product of education methods) vague and groping for some deep meaning in the mass concept. After thinking about this for a while, I think something like the following is going on.

Mass is a central, "deep" notion in highschool and early undergraduate physics: it's indispensable to Newtonian mechanics and gravitation - pretty much all of physics thought about up until about 1890.

Then one studies more modern physics - particularly after relativity and the rise of the Noetherian emphasis on symmetries - and suddenly "mass" takes a back seat. This sudden loss of status by a concept that a student put so much work into learning and understanding comes as a bit of a shock. One is left, highly naturally and understandably, with the kinds of groping question you put here.

Why this has happenned I have tried to answer in this post - mass doesn't have the symmetries and follow the same kind of conservation laws that the "foremost" useful notions in physics do. The other question, one that I think is implicit in these "mass loss trauma" kind of questons, is, "What becomes of the important rôles that mass has in Newtonian dynamics?".

The first rôle, inertia, simply becomes awkward and confusing in relativistic dynamics and is thus superseded by better ways of analyzing dynamics. This is because a body's "resistance" to change of motion state depends on the angle between the force and the body's (three) velocity. In the early days, people therefore used to try to salvage "inertia" and talk of "transverse" and "longitudinal" mass: the "inertia" against a shove directed along the body's velocity is $\gamma^3\,v$ - much higher than the inertia against a sideways shove, namely $\gamma\,v$. It thus simply becomes simpler to talk about changes of four-momentum and four-velocity through $F^\mu = \mathrm{d}_\tau p^\mu = m_0\,\mathrm{d}_\tau v^\mu$ using Minkwoskian geometry rather than trying to split momentum up further into an "inertia times rate" decomposition. The only "residual" mass concept thus remaining here is the rest mass: an energy notion - the energy you see in a body when it sits still before you.

The other rôle, that of a "coupling constant" to the gravitational field as in Newtonian gravitation, becomes altogether superseded by the stress-energy tensor - something much more general and very different from the simple scalar notion of mass in Newtonian gravity. I've nicked the following little drawing from Wikipedia: 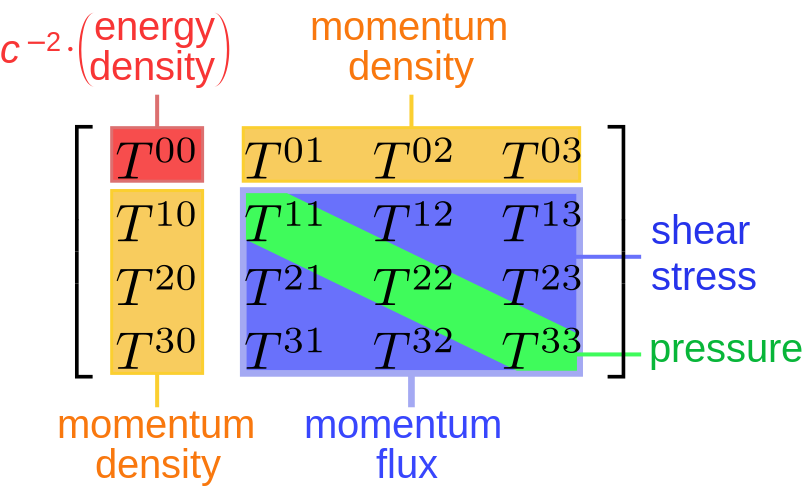 because here we can see the equivalent of the Newtonian scalar notion in red at position $0\,0$. In many cases, this element is by far the most dominant one, and we revert to Newtonian gravitation with a scalar mass notion as an approximation.

People also try to see too much meaning in the notion of "mass energy equivalence" - it still seems to be thought of as a kind of religious totem. I'd have to say that I think this idea has passed its use-by date if you want to think soundly about the basics. I tend to think of it not as a fundamental "equivalence" principle of physics, but rather as an historical stage of our thinking - it was Einstein's first glimpse one hundred and ten years ago that the notion of mass was really not the most useful one; our first warning that we ought to be looking at reality differently. It was the first stage of a "mass by energy supersession". We replaced a squidgy, awkward and unsymmetric notion by a more elegant, clean one that fully conforms with the symmetries that makes it so useful and simple in modern physics. It's time to replace that Model T by a Tesla!

But, in the interests of practicality, in everyday situations - like calculating the dynamics of a robot - where $\gamma\approx1$, the scalar mass concept is useful and you'd be certifiably insane to forsake it to do full relativistic calculations.

Not the answer you're looking for? Browse other questions tagged mass conservation-laws charge or ask your own question.

3
Doubts about the definition of mass
10
Is electric charge truly conserved for bosonic matter?
2
The mass-energy equivalence for rest mass
3
Problem on electromagnetic induction and Newtonian physics
29
Can the center of charge and center of mass of an electron differ in quantum mechanics?
1
Binding Energy and Energy Mass Equivalence
1
Battery operation, charge and discharge processes misconceptions
2
Electrostatic values where there are some charge