I have experimental measurements of orbits of 4 different simulated dynamical systems. Below is the log distance of initially closely separated points against time in seconds for each system (obtained through simulation by slightly perturbing initial states and averaging over many orbits). Lyapunov exponents (lambdas) indicated in the image are obtained through linear regression of the linear parts of the curves. 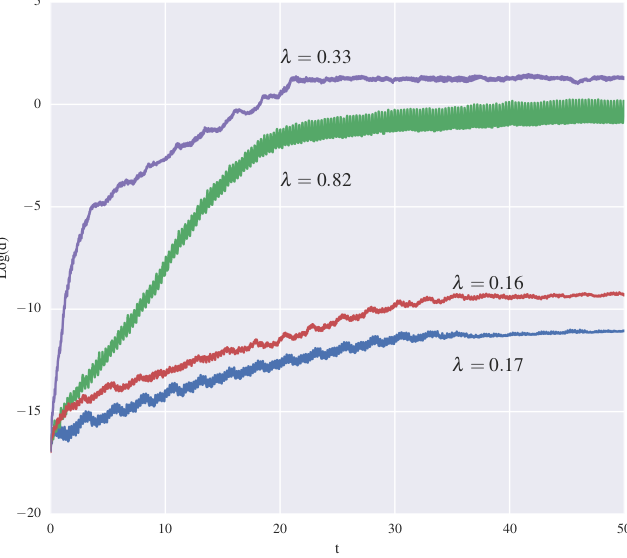 Now my questions is: for the red and blue curve, even though Lyapunov exponents are positive, the "attractor diameter" seems to be tiny, judging by the maximal separation of trajectories of around $e^{-10}$. So can these systems really be considered "chaotic"? Even though they separate exponentially fast initially, their Lyapunov time is infinite if I set the prediction error tolerance at say $e^{-8}$ (certainly not an unrealistic value). Since this is not typically the case for chaotic systems, I'm hesitant to call these two systems "truly chaotic". So which is the right measure, if any? And does this mean that in practice Lyapunov exponent alone is not sufficient to completely characterize chaoticity of a system?

Edit: I should probably add that all 4 system have the same scale, i.e. the same state space. And saying that and thinking about it some more I believe I can answer my own question (the systems for the red and blue curve are not chaotic), but I'll leave the question up for expert opinions.

The attractor diameter isn’t determined or defined by the average value of $d$ after a certain time. It is what you call the scale of the state space, or with an equation:

$$ \text{diam} = \lim_{t→∞} \max_{t_1,t_2} \left| x(t_1) - x(t_2) \right|,$$ where $x$ is the entire state of your system. For a positive Lyapunov exponent, $d$ should first grow exponentially and then oscillate around some value that is the same order of magnitude (but smaller) as the diameter of the attractor. If it doesn’t, something has gone wrong.

Some approaches for you to consider:

Not the answer you're looking for? Browse other questions tagged chaos-theory complex-systems or ask your own question.