I'm a beginner in both quantum mechanics and computational physics, So please be as simple as possible. I know these topics can become so complicated.

I've been trying to solve the Schrödinger equation for an infinite potential well with an obstacle in it's middle section. Here's my potential as a function of x: 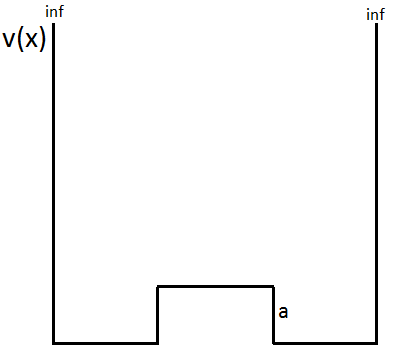 I wrote a program to solve this equation numerically and first tested it with an ordinary potential well and I got correct results with tolerance of 0.0001. Then added potential and increased $a$ by a fixed step each time and computed $\Psi$ for the lowest energy state (ground state) and plotted the wave function ($\Psi$) against $x$. Here's the results (note that $a$ has increased by a fixed step each time): 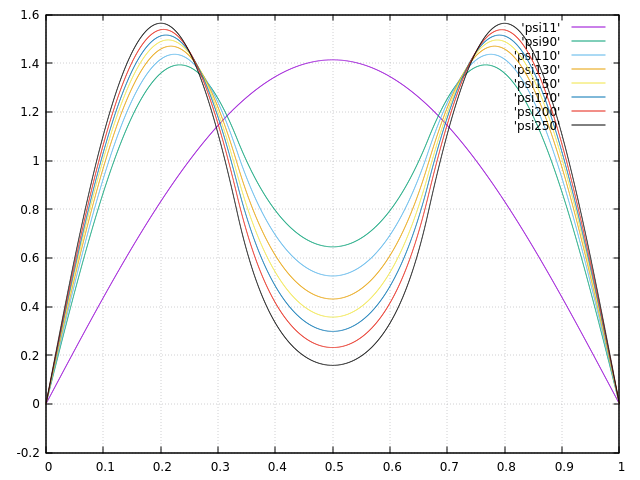 I'm curious to find out where do they merge into one? I couldn't solve this numerically because of the method I used for finding energy eigenvalues and of course my code's accuracy.

Yes, your model can be fully solved analytically, though actually finding the spectrum may involve the numerical solution of a trascendental equation. This is done explicitly in several introductory QM textbooks, but in essence all you need to do is solve locally for each region (which gives you sines and cosines, or exponentials) and then stitch the solutions by demanding continuity of the wavefunction and its derivative.

In essence, as $a$ becomes bigger than the ground state energy, you end up solving for two weakly coupled wells, with roughly independent ground states; the global well ground and first excited state then become even and odd linear combinations of the two individual ground states, with an energy splitting that depends on the coupling between the two wells.

Regarding your other points,

When the middle bit goes up to infinity.

When the middle bit goes up to infinity. The ground state is never zero there (though it does decay exponentially in $a$); the first excited state is identically zero in the middle.

Of course there is an analytical way.

At steps 2 and 3 you get quantization by matching the coefficients using the boundary conditions, and finding the energy by solving a transcendental equation.

Not the answer you're looking for? Browse other questions tagged quantum-mechanics homework-and-exercises wavefunction schroedinger-equation computational-physics or ask your own question.