Given torque, what is the direction of motion?

Consider some essentially two-dimension problem, like a horizontal iron bar with one end fixed, affected by gravity. The direction of the torque is perpendicular to the bar and gravity.

I also see a vector formula like $\vec \tau = I \vec \alpha $. Since the moment of inertia $I$ is a positive scalar, it does not change the direction of vectors. Hence, this kind of formula implies that the angular acceleration is perpendicular to the force causing it.

This leaves me quite confused; given torque, how can I determine how an object starts moving? There should be a cross product involved, somewhere; otherwise, the perpendicularity do not work out correctly, I think.

Now to find the object's linear acceleration $\newcommand{\a}{\mathbf{a}}\a$, simply differentiate the above equation:

Above, the second line introduces the angular acceleration $\al$, defined as the time derivative of $\w$. Also in the second line, but in the second term, we used the result for velocity that $\dot{\r} = \v = \w \times \r$. In the end, we got that the linear acceleration $\a$ consists of two terms. The second term is the usual centripetal acceleration term, which looks like $-\omega^2r$, but there is a projection which makes sure you are using the separation from the closest point on the axis of rotation (that is, you subtract of the component of $\r$ along $\w$).

The tangential acceleration, then, must be contained in the first term. Since it is given by a cross-product with $\r$, we see it is perpendicular to $\r$ and therefore is "tangential" in the sense that is tangent to the sphere of radius $r$. Notice in the special case where the axis of rotation is fixed, so that $\a$ and $\w$ are colinear, $\a= \al \times \r$ is colinear with $\v = \w \times \r$, so the tangential acceleration is colinear with the velocity as expected.

Suppose the force $\vec F$ and displacement $\vec r$ are in the xy plane. 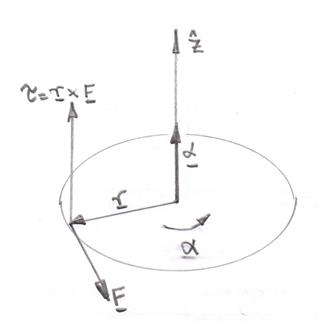 Then you would expect the the angular acceleration would be anticlockwise looking down from the top just from the direction of the force.

The torque $\vec \tau = \vec r \times \vec F$ is in the $\hat z$ direction but so is the the direction of the angular acceleration $\vec\alpha$ if you use the right hand grip rule. 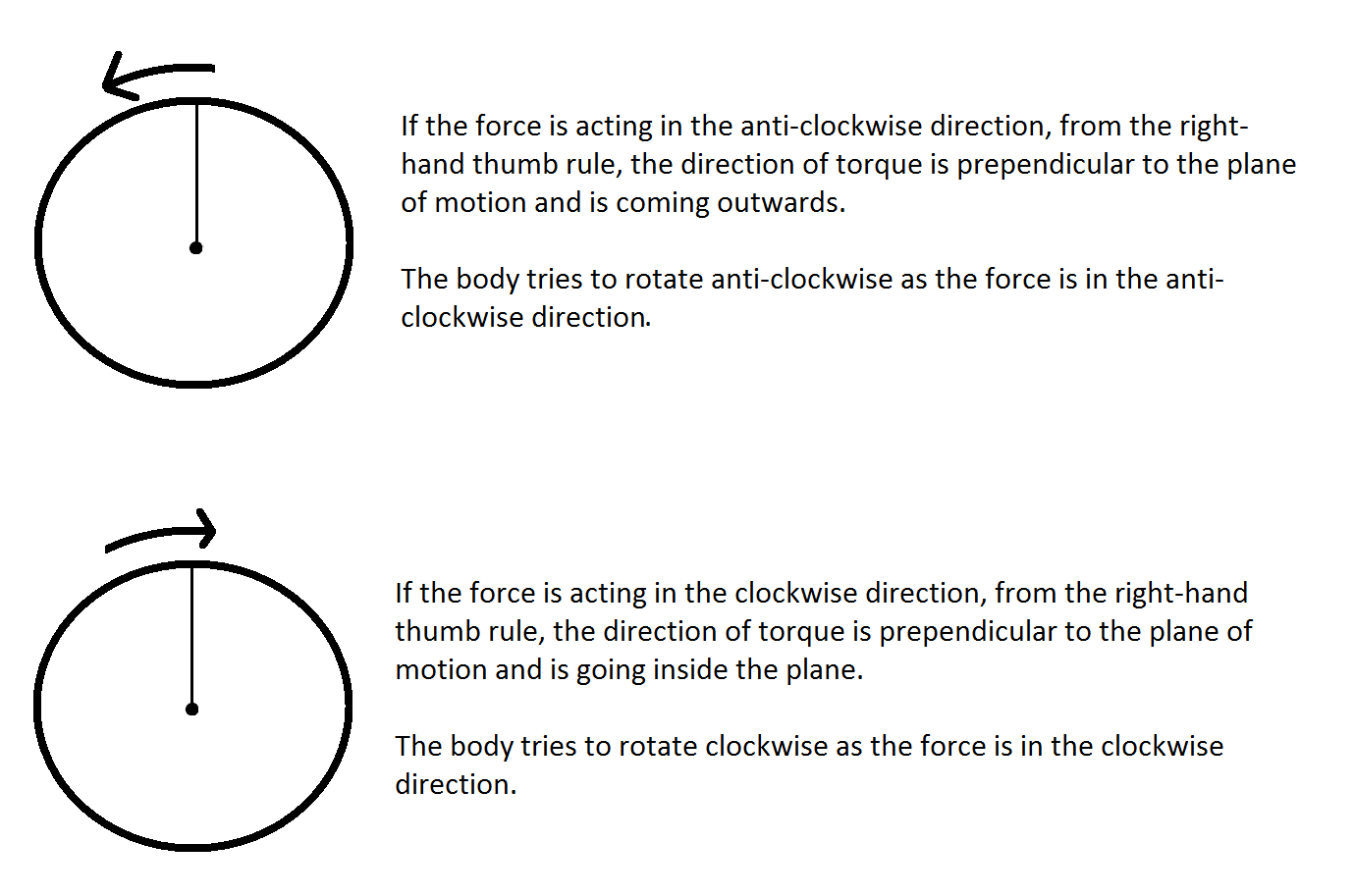 If the torque is coming out of the plane, the tangential acceleration is in the anti-clockwise direction.

If the torque is going into the plane, the tangential acceleration is in the clockwise direction.

To start off, note that the direction of torque obtained by the cross product is NOT the same as the direction in which the torque rotates the body(the former case only gives the sense of axis-whether into the plane or out of it). The angular acceleration must be perpendicular to the force, for otherwise there would would be tangential components of the acceleration, causing the body to 'tear apart'; inconsistent with the definition of a rigid body.

Now, as to the direction of rotation a torque causes- a simple working rule may be identified-

(1) Identify the point/axis about which the rotation occurs.

(2) DRAW (this is essential) the direction of the force on the body. Make an arrow, sort of.

(3) Now, extend this arrow into an arc such that the arc ENCLOSES the point of rotation.( There will be two directions to extend the arc-leftward or rightward. Extend it along the direction in which the axis of rotation lies).

Thus, in the figure (pardon the lousy diagram), the torque rotates the body CLOCKWISE. Note that you MUST keep track of anticlockwise and clockwise torques; and add them algebraically.

2
Torque and Angular Momentum
2
Component of angular momentum perpendicular to the rotation axis in rigid body rotation
1
When does torque equal to moment of inertia times the angular acceleration?
22
Why does torque point perpendicular to direction of the motion?
0
Torque, Angular Acceleration and Linear Acceleration
0
Why torque is defined to have a direction as the axis of rotation?
1
Torque cross product
0
Shouldn't the relation between torque and moment of inertia and angular acceleration be $\tau = I\alpha \sin\theta$?