Why does current have to flow in the same direction?

If current is just the movement of charged particles, why do the all have to move in the same direction?

Firstly, if positive holes moving towards the negative terminal corresponds to electrons moving the opposite way (since "holes" aren't real, they're just a lack of electrons). So on both sides of the diode, electrons are moving in the same direction. I don't quite understand how this doesn't correspond to a current flowing.

Not even looking that deep into it, if positive charges are moving one way and negative charges the other, why does it matter if they cross the PN junction? Moving charges = electricity, right?

On top of all this, the battery creates an electric field that goes through all the wires, so why is there no current in the circuit? Electrons don't even move that fast (I've heard drift speed is on the order of cm/s), so "current" is localized in the sense that an electron on one side of a circuit may never even reach the other side. So why aren't localized electric fields enough to create a circuit?

The battery supplies a part of its chemical energy to the electrons that emerge out of it. These energized electrons lose this energy in the outer circuit, when they go through various electronic components. The electrons in a simple conductor collide due to their thermal energy.

Current is defined as the number of charges passing unit area of conductor per sec. The electrons inside a conductor without a battery, suffer a lot of collisions but their velocity on an average can be considered $0$ and hence, they are unable to produce current.

But when a battery is joined across the conductor an electric field is set up in it. Even in the presence of this electric field, the free electrons suffer a lot of collisions but now their movement gets a certain direction. The real motion is still zig-zag but with a certain direction. The high number of collisions are responsible for their slow drift speed.

The electrons drift through the conductor and their speed ,in presence of E.field, is called drift speed. Although the drift speed of electrons is very low $( −0.000023 m/s)$ a large current is produced because of their high quantity crossing per unit area of the conductor per sec, which is about $10^{23}$ electrons.

All charges don't move in the same direction. It's the net effect that we see. I think you're missing the fact that conventially current was thought to be the flow of positive charges.

Now getting to the part of your question in which you address a diode being reverse biased. Who says there isn't a current when you reverse bias it? There is a current! But it's so negligibly small (in microamperes) compared to the current we get in forward bias (milliamperes) that we can neglect it and say that there is no current in reverse bias. Think about it. Both differ by a factor of 10³. Current in the reverse bias is limited by the number of minority charge carriers present in either wafers of a junction diode.

Hope that clears your doubt.

Causes of the miniscule reverse current. 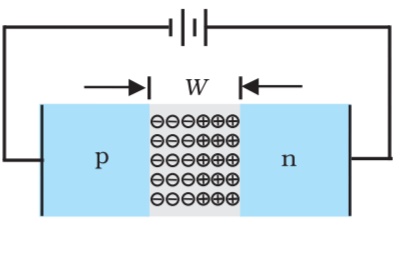 (Sorry for the poor quality picture. I've cropped it from a screenshot of one of the pages of an e-book I had. Ignore the W, that's was there in another context).

You can see that the diode is reverse biased. The external biasing provided by the battery sets up an electric field which is in the same direction as that produced by the space charge regions in the depletion region. Now any hole on the n-side (remember that both holes and electrons exist in any type (p or n) of a doped semiconductor, it's just that one is in excess) would move towards the depletion region because of the field due to the battery. If it gains enough kinetic energy to just enter the barrier region, the field there will push it to its majority charge region (I.e. the p-side). Similar is the case with an electron on the p-side. A natural doubt would be why does that make the current small? The answer to that is the fact that the concentration of minority charge carriers (electrons in p-type and holes in n-type) is much much smaller than the concentration of majority charge carriers (holes in p-type and electrons on n-type). Since their (minority charge carriers') concentration is much much smaller their flow is much much slower.

I hope that that's a bit intuitive to you. If it isn't, here's a weird analogy: Ten people jumping on a trampoline have more chances of breaking it than a single person jumping on it. The ten people here may be thought of as those causing the large (~milliamps) current in forward bias while the single person may be thought of the person causing a negligible current (~microamps) in the reverse bias.

Not the answer you're looking for? Browse other questions tagged electricity electric-circuits electric-current semiconductor-physics or ask your own question.

1
PN Junction Depletion Region
4
How does current flow from the emitter, through the base and to the collector in a NPN transistor?
12
Why doesn't current flow in reverse biased diode?
0
What are the current carriers in a PN junction?
0
Explaining why there is current in a circuit with a capacitor whilst the capacitor is charging
1
Conventional explanation of basic Semiconductor & Diode behavior unconvincing
0
Why do diodes block current in a single direction?
5
How does a transistor work?