How to reconcile time dilation equation with concept

So I must be misunderstanding time dilation, but according to the Lorentz transformation $t_v=\frac{t_o}{\sqrt{1-\frac{v^2}{c^2}}}$, where $t_v$ is the time on the object moving relative to the measuring observer, and $t_o$ is the time measured on the object still relative to the measuring observer. But by this, one could deduce that $t_v>t_o$ and thus the time on the moving object is greater, implying it is running faster than that of a still object. This seems to be inconsistent with the theory of time dilation as a concept, which suggests that time would move slower on the moving object.

There is an example question which I cannot resolve which seems to illustrate this:

An astronaut set out in a spaceship from Earth orbit to travel to a distant star in our galaxy. The spaceship travelled at a speed of 0.8c. When the spaceship reached the star the onboard clock said the journey took 10 years. An identical clock remained on Earth. What time in years had elapsed on this clock when seen from the astronaut’s spaceship?

If this is resolved with Earth as $t_v$, since it is moving relative to the measurement of the astronaut, we get an answer of 16.7 years. This implies, however, that more time has passed on Earth during the flight and thus Earth time was running faster. If resolved in the alternate way, we get a value of 6 years, however this also seems inconsistent as Earth was set as the stationary reference frame

The formula you have needs to be interpreted carefully. It depends on who is looking at which clock and what is meant by "how fast time is moving." In your formula, let's have $t_o = 1$ second. When you calculate $t_v$ your are calculating how much time has to pass in the rest frame for the moving clock to tick one second. So, moving clocks tick slower, so it takes longer for a moving clock to indicate one second. That's why the formula results in a longer time.

A spacetime diagram on rotated graph paper might be useful here, together with some geometrical intuition. 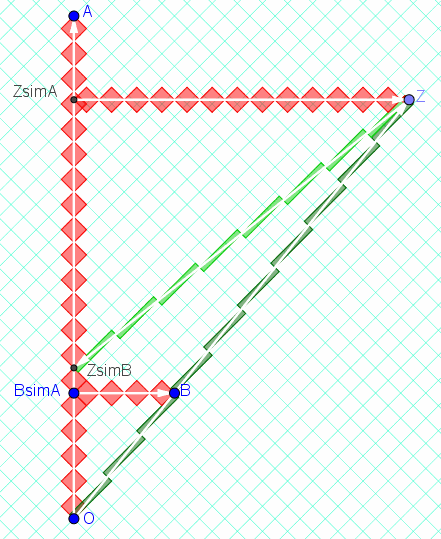 Bob travels at (4/5)c (given by the Minkowski right-triangle with hypotenuse OB). Event Z is 10 ticks along Bob's worldline.

Time dilation relates two timelike segments from event O with endpoints that are simultaneous to the observer making the measurement.

So, Alice says BsimA is simultaneous with B. She measures the time-dilation factor $\gamma=\frac{OBsimA}{OB}=5/3$.

Alice also says ZsimA is simultaneous with Z. She measures the time-dilation factor $\gamma=\frac{OZsimA}{OZ}=16.666/10=5/3$. (Indeed, these Minkowski-right triangles are similar by scaling.)

Trigonometrically, there is an angle $\theta$ between the worldlines (called the rapidity... the arc-length subtended on the unit hyperbola centered at O). These ratios can be thought of as $ADJACENT/HYPOTENUSE=\cosh\theta=\gamma$ (where $OPPOSITE/ADJACENT=\tanh\theta=v$, the velocity).

It is often said, that single clock dilates relatively to a set of spatially separated and Einstein – synchronized clocks.

This set of synchronized clocks is the REST FRAME of the observer. Observer is not a real physical person, but the whole reference frame, or team of observers. Relativistic observer conducts measurements in his own rest frame.

If "moving" observer wants to measure dilation of another clock, he has to turn himself into one "at rest" by means of introducing his own rest frame. He simply puts another additional clock (at least) and synchronizes it by Einstein signalling method (Einstein clock synchronization convention).

This article emphasize this important detail at page 6 (6) http://isites.harvard.edu/fs/docs/icb.topic455971.files/l09.pdf

"Two spatially separated clocks, A and B, record a greater time interval between two events than the proper time recorded by a single clock that moves from A to B and is present at both events."

It is absolutely clear even visually (animation from article Time Dilation in Wikipedia).

Notion of Observer in SR https://en.wikipedia.org/wiki/Observer_(special_relativity)

In your case, observer in the reference frame of Earth has to place two Einstein – synchronized clocks. One E1 is at Earth, another E2 is far, far away at the point of arrival of Astronaut. These clocks are Einstein - synchronized. When Astronaut arrives to E2 his clock shows gamma times less time. Obviously, clock E2 shows gamma times more time.

This discrepancy of clock readings when they meet again is often called clock paradox or Twin paradox.

All that goes straight from the Lorentz transformations.

How to interpret Lorentz transform for time?

Now let's fix point $x'$, for example $x'=0$. In this case this transformation will look like that: