Musical notes and colors of a rainbow

I have wondered that in an octave in piano there are seven primary notes, and also we observe mostly seven primary colors of a rainbow. I know we perceive logarithmically, that means we only care about relative differences.

Is there any relation between $7$ musical notes (in an octave) and $7$ colors of a rainbow?

EDIT: I agree that the primary term for the $7$ notes in an octave is more or less the matter of taste. However, if we take the western musical taste as a guide, we can justify ourselves to use $12$ notes in an octave and place piano keys in the present way. Take a look at here.

On the most basic level, the answer is a flat no. The seven primary notes in an octave is specific to the western musical tradition. It's not entirely arbitrary as you say, but there are many other choices that could have been made, and there are other cultures who use fewer notes (e.g. pentatonic scales in blues music) or more (e.g. Indian classical music). The seven colours in the rainbow are also somewhat arbitrary. (Are indigo and violet really different colours? Why don't we count aquamarine, right between green and blue?)

Having said that, it does happen to be the case that the range of frequencies we can see is just a little short of an octave, ranging from about 440-770 THz. This is really more or less a coincidence, but because of it, I can point out a relationship between light and colours, just for fun.

The A above middle C is defined, for modern instruments, as 440Hz. The A an octave above is 880Hz, and in general if we go $n$ octaves up we get a frequency of $440\times 2^n$. If we go forty octaves up from A we get a note of 483 THz. This can't be played as a sound wave (air can't vibrate at frequencies that are too high) but as an electromagnetic wave it's a slightly reddish orange.

(I leave the sharps and flats as an exercise to the reader.) So you can't see G (or F#), but the other notes do actually have colours.

However, as I said this is just a bit of fun and does not in any way have any practical implications, since sounds at those frequencies can't be transmitted through air.

As requested in comments:

There is a connection in the sense that Isaac Newton regarded both musical harmony and optical physics as branches of mathematics (Kepler did the same with harmony and astronomy, and this kind of thing was not original to them), and deliberately chose 7 rainbow colours to match the common Western scale, despite his poor eyesight initially only spotting 5 colours; he later added orange and indigo

Wikipedia's article on the rainbow says

Newton chose to divide the visible spectrum into seven colours out of a belief derived from the beliefs of the ancient Greek sophists, who thought there was a connection between the colours, the musical notes, the known objects in the Solar System, and the days of the week.

and includes a reference to a 2004 article by Niels Hutchison, MUSIC FOR MEASURE, On the 300th Anniversary of Newton's "Opticks"

Answer to this question varies significantly based on point of view.

Physics & Physiology: No, there is no connection. The mechanisms are quite different (EM vs. acoustic spectrum, eyes vs. ears etc.) and number 7 is arbitrary.

Musicology & Aesthetics: Number 7 isn't that important, because in an octave there is actually 12 notes if we adopt western model and it is not the only option, vision does not have an octave-principle etc. On the other hand, there are numerous theories (but in context of this site let's label them "analogies") about visible color and tone (e.g. from Newton himself). This notion (part of a bigger phaenomenon called synesthesia) is psychological and experience-based. It lies on no physical principle - well, other than: "Waves! It all fits together, ya know?!"

The cochlea performs a mechanical Fourier transform. To some extent, we hear wavelengths. We can see a detailed explanation in The Human Ear -- Hearing, Sound Intensity and Loudness Levels.

But we don't see wavelengths. The different (usually three) types of cone cells are more or less sensitive to different (objective) wavelengths. Each (subjective) color is the product of this three signals. 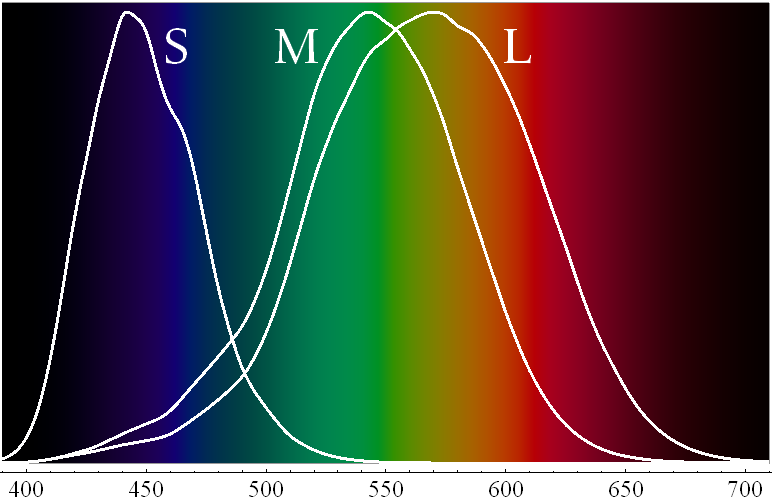 What we perceive as colors are only a tiny fraction of the electromagnetic spectrum. An octave of piano notes represents a set of frequencies in the acoustic "spectrum" (light waves and sound waves are fundamentally different, by the way). The number 7 is arbitrary, we can name many more colors and we could define many more notes (on the piano we actually have 12 in an octave).

One more difference is that the rainbow contains the whole visible spectrum from red (large wavelength) to violet (short wavelength). Above and below that we are not able to perceive. One octave on the piano, on the other hand, is just one fraction. There are many octaves we are able to hear. The pattern repeats many times. Regarding 7/12 notes: music and physics yield a number of notes. But the number of colors in the rainbow is completely arbitrary. Where do you define boundaries between colors (e.g, yellow-green, bright-lime, citron)? It is continuous.

So from my perspective it is even more difficult to find relations than to find differences between "notes" and "colors".

Not the answer you're looking for? Browse other questions tagged optics visible-light acoustics vision perception or ask your own question.

8
What are colors?
4
Why can we 'make' new colors simply by adding wavelengths?
6
Why slightly closing your eyes let you see the rainbow colors?
9
Need mathematical explanation for different musical notes sound different on different instruments
1
How is white light created by complementary colors?
1
Colors of the Earth from space, an “average” of particular emitters?
0
What are the “real” primary colors and complementary color pairs?
1
Rainbow Colors on a Water Droplet on a Screen