What did this geophysicist mean? (geomagnetism)

I recently went to Antarctica where we made many shore excursions with Zodiacs. On one of them we visited the Ukrainian Vernadsky Research base on Galindez Island where they conduct geophysics research.

I was discussing this with one of the scientists there who was trying to describe his work. His English was not great and he was probably talking down to me as a non-specialist, but he very clearly indicated that he was studying the way charged particles from the sun cause perturbations along geomagnetic lines of force over great distances. And on a piece of paper he drew one such line that he was studying which he showed as descending to earth in New England (where I live) and said they were doing this research with Boston College.

My Question: I always thought that the idea of a "line" of magnetic force was conceptual convenience, an artifice we used to be able to talk about magnetism but that there are no actual, physical discreet "lines". And that the visual lines that form with, say, iron filings, are just due to the magnetized filings attracting others around them and so are just clumping artifacts of the filings themselves.

But this scientist seemed to be specifying a very specific line including a specific location near Boston where it descends to earth and drew it that way on a piece of paper and said they had been studying this particular line for years during different cycles of solar activity. What could he have been referring to?

Geophysicists are not referring to specific lines of force, but instead study major long-term features or "lobes" of the earth's geomagnetic field. Apart from the main dipole, the field has more local features associated with more rapid change. These are hypothesized to originate somewhere in the core-mantle boundary and share some interesting relationships with the main dipole's excursions and flips.

As pointed out already, the magnetic field is continuous and not made of discrete lines of force in a literal sense, but field lines are an effective way to represent the magnetic field vector, akin to stream lines for fluid flow.

What your scientist was likely talking about is a connection between New England and Antarctica as geomagnetic conjugate points at opposite ends of a magnetic field line where it meets Earth's surface. Indeed, for recent years, a field line from Galindez Island would land in New England. 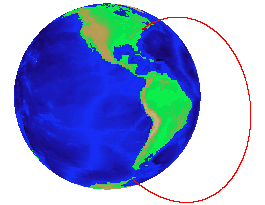 There are no actual discrete physical lines, (except connected with superconductivity), there is a continous magnetic field. My guess he was simply placing a strong emphasis on a particular direction of the field in which the particles travelled. My knowledge of geophysics is very limited, perhaps there is some aspect of the terrain in the "landing zone" of the particles that is particularly important, but there are no field lines in reality.

I always thought that the idea of a "line" of magnetic force was conceptual convenience, an artifice we used to be able to talk about magnetism but that there are no actual, physical discreet "lines".

And that the visual lines that form with, say, iron filings, are just due to the magnetized filings attracting others around them and so are just clumping artifacts of the filings themselves.

Not the answer you're looking for? Browse other questions tagged electromagnetism geomagnetism or ask your own question.

16
What is the source of Earth's magnetic field?
11
What does this quote about the four dimensional divergence of an antisymmetric tensor mean?
1
What does the $j$ mean in this notation?
0
Radio light/radio wave light: what does this mean?
0
What does this equation mean and what are the parameters?