What is the physical quantity which makes a Reed switch open or close?

I would like to generate the activation map of a Reed switch, similar to the following: 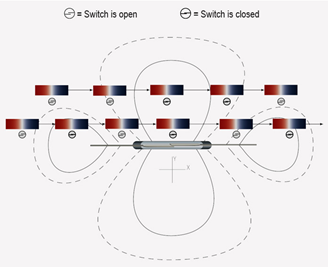 Using a magnetic finite element modeling software such as FEMM.

Assuming the Reed switch closes for X Ampere-Turn, what quantity do I have to measure in the software to determine whether the position and orientation of the magnet considered make the switch close?

I can calculate plots of the H field, linear integrals along arbitrary contours, integrals over arbitrary areas... But I don't really know which one to consider, especially considering that the field varies inside the Reed switch between the strips.

Edit: I understand these types of XY closure graphs, I would like to generate one using FEMM. For this I need to know what to measure in the software (and where/how) that I could convert to Ampere Turn to know whether the switch should be closed or not.

Whether the reed switch opens or closes depends primarily on two things:

and a perpendicular one will produce 4 lobes: 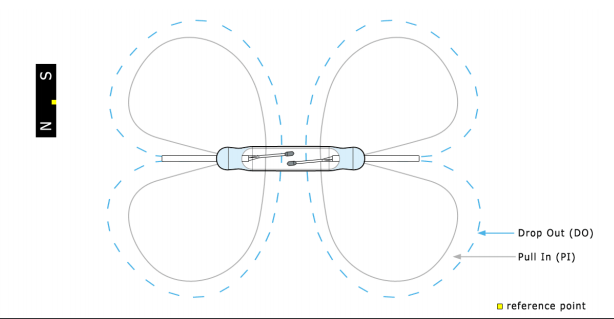 If the reed switch need a minimum of $X$Ampere-turns to close, then any bar magnet with a strength equal to or grater than this that moves into one of the lobes, will make the switch open or close. Of course if your magnet is much stronger than $X$Ampere turns the size of the lobes will increase.

You might find the diagrams and animations here useful.

Not the answer you're looking for? Browse other questions tagged magnetic-fields electronics electrical-engineering magnetostatics or ask your own question.

4
What is the role of center-tapping in a full wave rectifier?
0
What makes B-field not be arbitrarily large very close to an electric conductor?
6
What are the possible magnetic fields with constant magnitude?
2
What makes quartz oscillators vibrate?
1
Which physical quantity is represented by the surface integral of magnetic field?