Imagine that the rigid body is fixed in the $Oxy$ co-ordinate plane. The rigid body need not overlap the origin $O$. If the co-ordinate plane is rotated (eg about the origin $O$) then every line in the plane rotates through the same angle, regardless of its position. Each of the two points at the ends of any line rotates through the same angle about the other. This is true whether the two points both lie inside the rigid body, or one inside and one outside, or both outside.

Consequently, when an axis is chosen outside of a rigid body, the angular velocity is only the same as that measured within the rigid body if the axis rotates as though it were part of the rigid body. For example, the whole co-ordinate plane could be regarded as a rigid body which has finite density inside the region occupied by the object of interest and zero density outside of the object in the rest of the plane. 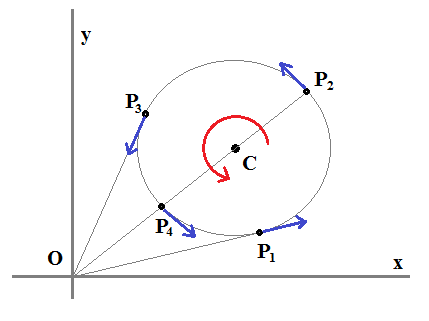 Not the answer you're looking for? Browse other questions tagged newtonian-mechanics rotational-dynamics reference-frames angular-velocity or ask your own question.