Why do fusion cross sections drop after a certain temperature?

The title sums everything up. The fusion cross section increases up to a certain temperature due to collisions and the increased probability of tunneling through the coulomb barrier. But why does the cross section drop after a certain number? Do the collisions become less frequent or is there any other reason behind this? My friend told me, once the particles start moving extremely fast, they don't have enough time to fuse (for tunneling to make them fuse). Is this right? If it is, what is the minimum time needed for the particles to fuse? 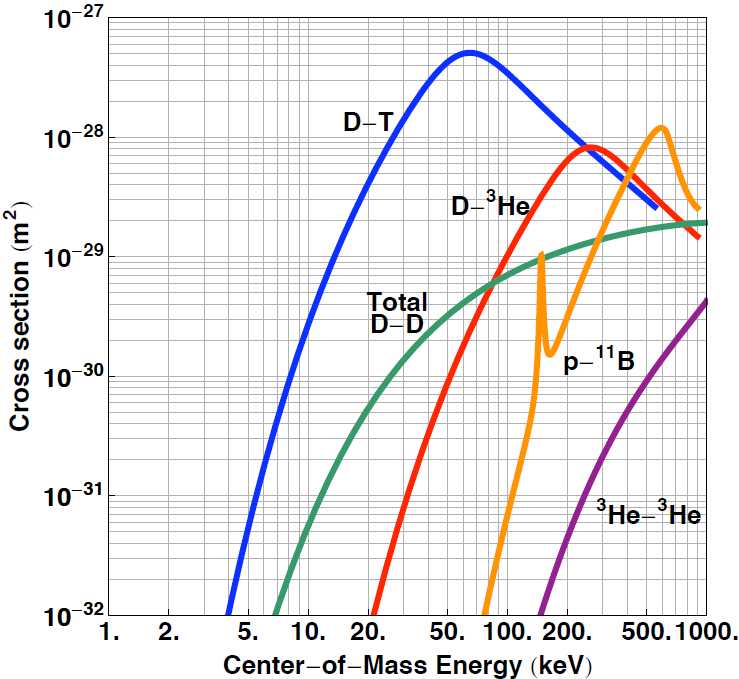 When the incident nuclei have too much energy left after crossing the Coloumb barrier they are increasingly likely to split one or more of the participants into smaller pieces than to neatly snuggle together. Or even to messily snuggle into a highly excited state that can then drop down toward the ground state by various photon emissions.

For a crude, human-accessible model imagine throwing two lumps of clay together. Too softly and they won't stick. Too hard and the violence of the collision throws bits off in all directions. Just right and you get an intact, combined mass.

If I am not mistaken, this is due to the fact that the fusion cross section is basically a product of the cross section of the two nuclei which have to be close enough to interact with each other. The relevant distance here is the de Broglie wavelength and that decreases with increasing energy, a higher energy nuclei thus corresponds to a smaller target.

The other factor is the tunneling probability through the Coulomb barrier and that increases with increasing energy.

The resulting fusion cross section is therefore the product of two competing function, hence the peak, which is also referred to as Gamow peak. You can also look at that process using the wave functions of the two nuclei which exhibit, in my understanding, a wave-wave resonance at the Gamow peak.

In my understanding, the process @dmckee is referring to, i.e. the splitting of the nuclei into smaller pieces, happens at much higher energies. For a quark-gluon plasma (smashing the protons and neutrons into its constituents, the quarks) you need energies on the order of $100\,\mathrm{MeV}$.

Not the answer you're looking for? Browse other questions tagged statistical-mechanics fusion or ask your own question.

2
How does the internuclear repulsion vary in Hydrogenic atom collision?
12
Does tritium hydride exhibit measurable spontaneous fusion via proton tunneling?
0
Is there any difference between fusing and smashing particles?
0
Why is the nuclear cross section for fusion so small?
2
Is high temperature **required** for nuclear fusion?
0
How does the Sun provide enough energy to fuse protons?
1
Why is the weak force the main limiting factor when it comes to the $p$-$p$ fusion chain, instead of the quantum tunnelling effect?