Will the Large Hadron Collider "explode" if the power is turned up too high?

The Large Hadron Collider, at low power, accelerates particles such that much of the total energy provided goes towards increasing their kinetic energy and their masses increase to some extent as well, and so Newton's equations are valid for this situation. However, when it's turned onto high power, as the particles tend to the speed of light, any additional power provided by the accelerator increases mostly the masses of the particles and their kinetic energy increases only slightly. That is why these high energy particles can pack quite a punch. It's sort of like taking a car and propelling it such that it transforms into a massive freight train.

This is a very stupid question, but I bet I'll get some really remarkable answers. If the power output of the Large Hadron Collider were infinite (or at least a very big number), and notwithstanding a failure or limitation of the mechanical and engineering aspects of the machinery, would it eventually "explode" if the power is turned up too high?

In the case of the LHC, yes the beam can do quite a lot of damage.

At full power there is something like 350MJ stored in the beam - close to a freight train, or roughly the kinetic energy of a full jumbo jet at take-off. There is a very complex safety system to dump the beam safely eventually steering the beam energy into a large block of graphite inside a much larger cooled block of metal inside a very big block of concrete.

Without this any instability in the beam could allow it to hit the wall of the vacuum tube where it would slice through it and then through the magnets like a hot knife through butter, or indeed like a high intensity beam of relativistic protons through superconducting magnets which is more impressive and a lot more expensive.

edit: detail of the beam dump below, Sorry I was obviously half-remembering a talk on the quench protection heaters.

I take it the Large Hadron Collider works like this... At low power, the particles gain kinetic energy but do not increase in mass very much so Newton's equations are valid for this situation. However, when it's turned onto high power, as the particles tend to the speed of light, any additional power output of the collider increases mostly the mass of the particles and their kinetic energy doesn't increase at all (or very little). That is why these high energy particles can pack quite a punch. It's sort of like taking a car and propelling it such that it turns into a massive freight train.

As noted in the comments above, it's a misunderstanding that the mass increases at very high speeds, a better explanation​ that I can give you is a blog that I highly recommend you read, Relativistic Mass.

The energy of freight train idea is true, but the point here is this is only because of the concentration of energy in a tiny area, the cross section of the collision, which is extremely small. You can easily flatten a fly with your hand, but hitting an elephant with the same hand power will not hurt the elephant, if it even noticed it.

Any explosion is dramatic, to be pedantic, as is noted in the comments above, it is a failure of the cooling system that is the danger, not the power involved in the beam itself.

There is far more energy used in the magnets used to steer and control the beam than there is in colliding elementary particles together. So my answer is no, the beam by themselves won't cause an explosion, but yes a failure of the support systems might.

It takes 120 MW to run the LCH - approximately the power consumption of all the Canton State of Geneva. Need a better comparison? 120 megawatt is equivalent to the energy used by 1,2 million 100 watt incadescent light bulb or 120,000 average California home. CERN turn the system off in winter, because of the power consumption involved. 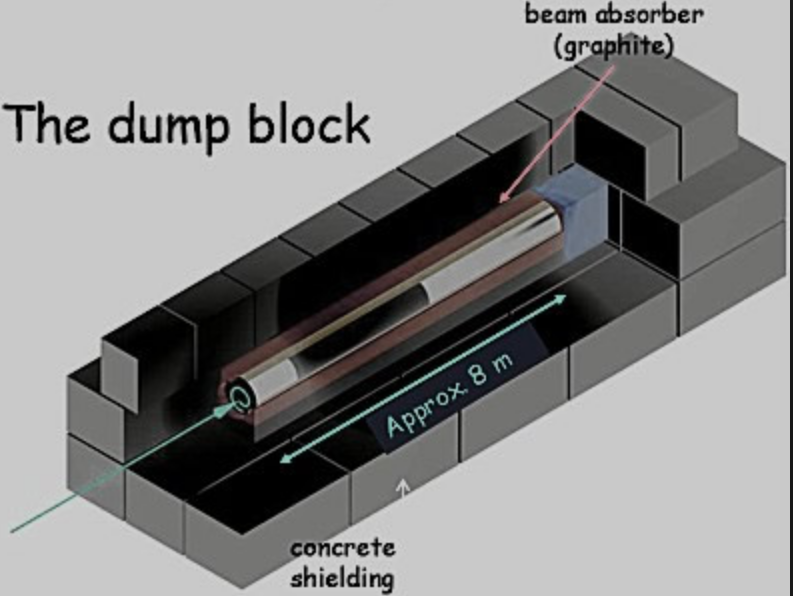 This is where the beam ends up after an accelerator run. It's possibly counterintuitive, but a light, high melting point block of graphite is used to absorb the energy of the beam. If lead or another metal was used, it would melt, and a messy cleanup and replacement block would be required after each run. This block of graphite is intended to last the lifetime of the LHC.

The only thing that could explode are the magnets. As mentioned by Countto10, there is a huge amount of energy stored in these magnets. Superconducting magnets are used, they are cooled using liquid helium. Due to a problem with the cooling, it can happen that part of a wire suddenly makes a transition from the superconducting state to the normal state. The huge current that moves through the wires will then get dissipated at that spot, generating an enormous amount of heat which will cause the liquid helium to exceptionally rapidly boil, expand in volume by a factor of ~800, heat the remaining helium, boil it, and therefore cause the whole magnet to essentially explode.

If the power output of the Large Hadron Collider were infinite [...] would it eventually "explode" if the power is turned up too high?

Yes - any hypothetical object capable of producing infinite power would "explode if the power is turned up too high," because an extremely high power output is pretty much exactly the colloquial definition of the word "explosion."

Not the answer you're looking for? Browse other questions tagged large-hadron-collider accelerator-physics particle-accelerators or ask your own question.

76
Why is there a controversy on whether mass increases with speed?