Suppose there is a car and a ball inside it can roll. Now the car accelerates with acceleration a.

Now what would be the the equations of motion for the ball in the car from both the frames of the car and ground ( both from inertial and non inertial).

Please see if how I have approached this simplified version is correct or not. if not please correct.

Please imagine a moving ball or box ( so that we can ignore rolling) inside an accelerating car with the same acceleration as the car , a.

From the ground $$F=uN=ma$$ ( since it has acceleration a and I am supposing it doesn't roll to simplify and understand my doubt).

From the car frame It is at rest in car frame. So the equation must to be $$F=uN-ma=0$$

( 0 because it has 0 acceleration in car frame and ma is pseudo force).

2) If the ball, had an acceleration A with respect to the car Then considering the car as the reference frame $$F=uN-ma=mA$$

Are the above equations correct or is there a fault ?

I have tried to solve the question and it would be beneficial for me if I can know whether I am going on the right track.

The friction only cares about the surfaces in contact; in the case of a sphere, it is just a point. It does not care if the sphere rotates or translates; all it wants is to avoid any relative motion at the point of contact.

With the above in mind, the question can be solved easily.

$m$ is the mass of the sphere

$f$ is the force of friction

This reduces to an elementary rotational motion problem where you have a sphere upon which a constant external force is applied.

The static friction tries its best to ensure that the surfaces in contact are at relative rest (condition for pure rolling). For that, the acceleration of the sphere must be such that the following condition is satisfied:

The net force on the sphere can be written as:

You have three equations and three unknowns.

The floor is accelerating; therefore, to ensure that the sphere rolls, the lowermost point of the sphere must accelerate such that the surfaces in contact are at relative rest. 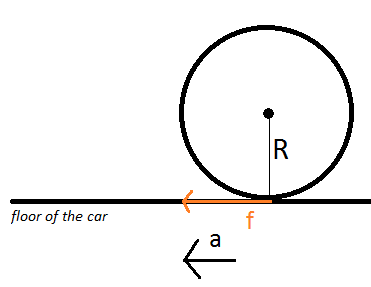 The frictional force will cause a torque and will cause the sphere to roll as well as move translationally. Just like in the previous case; well, the answers must be the same in whichever frame of reference you solve from.

The friction will try its best to ensure that there is no slipping. For that, the following condition must be satisfied:

The only force in this frame of reference is the friction. Therefore, the net force equals friction.

Not the answer you're looking for? Browse other questions tagged newtonian-mechanics forces kinematics friction inertial-frames or ask your own question.

0
What is use of inertial frames
4
How does separation of tracks affect the acceleration of a rolling ball on the tracks?
0
What would happen if a ball flew through the open window of a car?
1
Inertial force in two different frames
0
Serious confusions regarding the concepts of special relativity
9
Lagrangian equations of motion for ball rolling on turntable
0
Inertial frames?
0
Explain the stationary position of the bob from ground frame of reference
1
How do we analyze a pendulum from an Inertial frame?