Why did decoherence start in the first place?

We learn that the quantum wave function $\Psi$ collapses when it interacts with a classic object (measurement).

My question is:
Why are there classic objects after all, how did it all start? In a quantum universe (and I understand we live in one) there should only be superposition, how did these classic beings came into existence (which "decohere" the others) in the first place? Is it a statistical necessity like entropy - or doesn't, quite simply, anybody know the answer to that riddle?

NOTE: this started out as a quick answer and kind of got out of hand... but everything below the second line is probably optional

Actually, everything is quantum. The term "classical object" in that sense just refers to a system in which the classical approximation is valid, i.e. where quantum effects like uncertainty are negligible.

You can even do a quantitative analysis of this. But first, a quick aside on decoherence. Suppose your particle starts out in a state $\int\mathrm{d}p_p\ f_p(p_p)|p_p\rangle$ and the detector starts out in a state $\int \mathrm{d}p_d\ f_d(p_d)|p_d\rangle$, where $f_p$ and $f_d$ are the momentum-space wavefunctions of the particle and detector, respectively. The measurement process basically convolves the two states with a parameter that represents the momentum transferred, so the final state winds up being

where $f(q)$ is some wavefunction describing the relative probabilities of various results of the measurement. In practice, we will read off a particular value of $q$, call it $q_0$, from the measuring device, which is mathematically represented by inserting a delta function $\delta(q - q_0)$ under the integral. That's what makes the states of the detector and particle appear to decohere,

Now, suppose the detector contains 150 particles of the same type as the one being measured. Each of these 151 particles has a Gaussian momentum distribution $g(p)$, all with the same variance. For the particle wavefunction, $f_p(p_p) = g(p_p)$. But the detector wavefunction is a little more complicated, since you have to obtain it by adding up 150 copies of the wavefunction $g(p)$ using the arithmetic of random variables; it winds up being a Gaussian with $\sqrt{150}$ times the width and $150$ times the mean.

Anyway, with the setup established, let's move on to the results. Before the measurement, the particle (green) and detector (red) wavefunctions look like this, 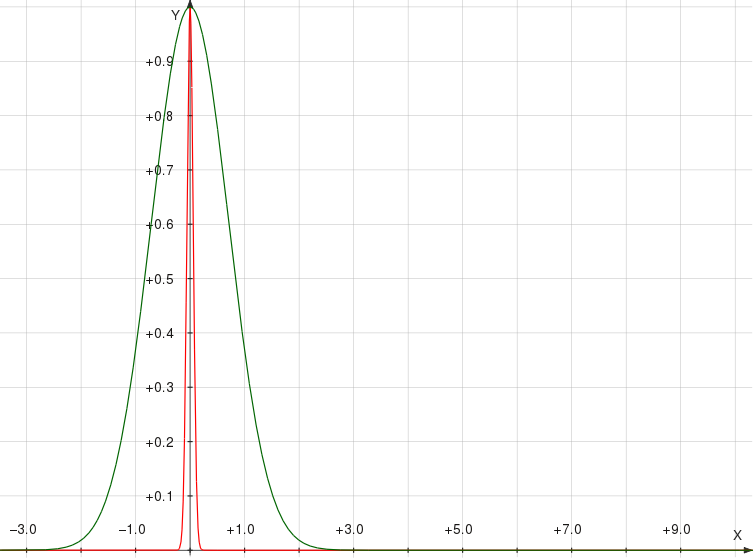 Here I've scaled the detector wavefunction down by 150 on the horizontal axis, so you're really looking at the average momentum per particle in the detector. This way it's easier to get a sense of the relative effect of any change in momentum.

Now suppose I happen to measure $q_0 = 5$ in whatever units we're working with. Using the formula above, here's what the decohered wavefunctions look like: 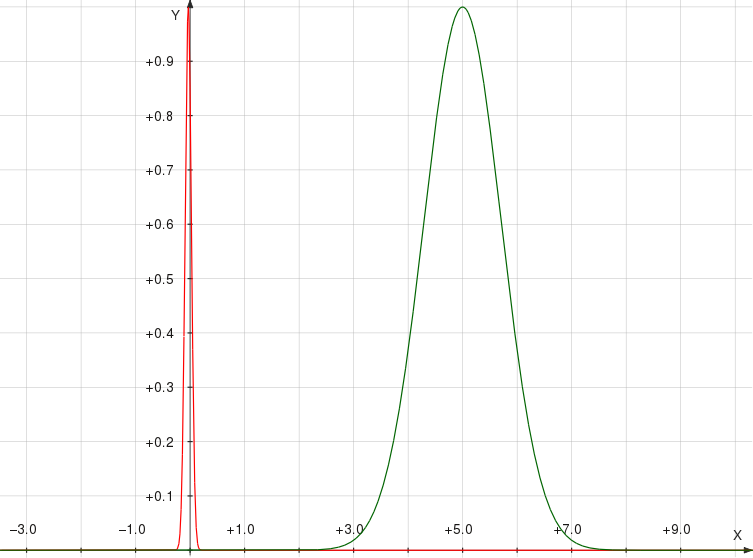 Notice that the particle wavefunction has shifted quite a bit, but the (scaled) detector wavefunction has barely moved at all. So it's still probably a reasonable approximation to say that the detector has zero momentum, i.e. you can treat it like a classical object.

there are no God-given "classical objects" in our Universe. The whole Universe - and even multiverse, if one exists - obeys the laws of quantum mechanics. One of the postulates of quantum mechanics - that are universally valid - is that for any pair of states in the Hilbert space, their general complex linear superpositions are possible states as well.

Classical physics is just an approximation and decoherence is a major process that clarifies the emergence of the approximate classical description. Decoherence explains why some objects suddenly start to behave in a pretty good agreement with the classical intuition. The fundamental truth is never classical, however.

Decoherence picks a privileged basis of the Hilbert space of a macroscopic object. But which basis it is depends on the Hamiltonian describing the evolution of the object - and its interactions with the Hamiltonian. The preferred basis is defined by the condition that in this basis, the density matrix becomes quickly diagonal if we trace over the environmental degrees of freedom. The diagonal entries of such a density matrix may be interpreted as ordinary "classical" probabilities. Quantum mechanics still predicts probabilities only, even in this limit: however, the coherence - the information about the relative phases of the states - disappears. That allows us to assume that one of the preferred states was already realized "before" someone looked at it.

Which basis vectors are those preferred ones? For example, they include the Schrödinger's dead-cat-vector and the alive-cat-vector, in the popular thought experiment. Why are these vectors preferred? It's because each of them "imprints" the information about itself - and its shape in spacetime - into the environmental degrees of freedom in such a way that the states of the environment are orthogonal to the states of the environment produced by other preferred vectors. Because the Hamiltonians are usually local, the preferred states will differ by positions of macroscopic objects.

That's why when we trace over the environmental degrees of freedom, the off-diagonal elements quickly go to zero (because the corresponding entangled states of the environment are orthogonal).

for some pedagogical explanations of decoherence and its impact on the interpretational issues of quantum mechanics. Once again, there are no classical states or "a priori classical states" in any quantum mechanical system - or the real world. Which states will look like the seemingly preferred basis depends on the Hamiltonian; we say that this question is determined dynamically (because the Hamiltonian is what generates dynamics).

The emergence of a legitimate classical description for large enough objects has nothing to do with gravity. Indeed, Newton's constant never appears in the description of decoherence and its speed. And the wave functions never "collapse". In fact, decoherence is exactly the right description that replaces the popular misconceptions such as the "collapse of a wave function" as well as ad hoc separations of objects into "microscopic quantum" and "macroscopic classical" objects which is what the Copenhagen school had to do in the 1920s. That approach was effectively correct and is confirmed by decoherence - except that decoherence also explains where this boundary comes from and where (at what size or other quantities) this boundary (gradually) emerges.

In quantum mechanics you need the classical object for the formulation of the theory. For such questions you would need a more general theory, probably including gravity. Say the true theory of quantum gravity will give the answer.

Not the answer you're looking for? Browse other questions tagged quantum-mechanics universe or ask your own question.

17
Are Thomas Breuer's subjective decoherence and Scott Aaronson's freebits with Knightian freedom the same things in essence?
7
How did the operators come about?
3
How does weak measurement affect quantum state?
0
Why do different energy levels affect the probability amplitude of the wave function?
0
Why should we care about representations of spacetime symmetries in quantum mechanics?
2
Why does quantum physics use "observation" rather than "interaction" as the term for the trigger which collapses the wave function?