Okay maybe a repeated one. I am asking this because none of the other explains how charges redistribute.

My argument is this:

The charges on the 4mF capacitor will be equally divided between the 2mF and 4mF, that is Q/2 on each of them. Because if we take one plate of each capacitor and connect them, then the charge will be equally divided. That is if we take the +Q charged plate and connect it to one uncharged plate of the 2mF, then each one will have +Q/2 charge. Similarly taking the negatively charged plate we get -Q/2 on each of the plates. Now if we rejoin them we will have two capacitors each charged to Q/2.

But, obviously my argument is wrong and please explain why?

The question you asked has a straightforward answer: the potential difference across the two capacitors must be equal, so the charges distribute in inverse proportion to the capacitances.

I wanted to highlight a more subtle point though, concerning the energy of the system.

Consider two capacitors of the same size, with one initially charged to $V_i$, and the other initially uncharged. They are connected end to end via a switch (see diagram).

From what has been said, we expect the charge, $Q = CV_i$ on the first capacitor to distribute itself evenly between the two capacitors because they have the same capacitance.

So the energy has halved. What? Where has the other half gone? There is no resistance, so no energy can be dissipated, yet it is clearly halved.

This problem might trip you up and indeed there is a Wikipedia page titled "Two capacitor paradox", that explains this in detail. 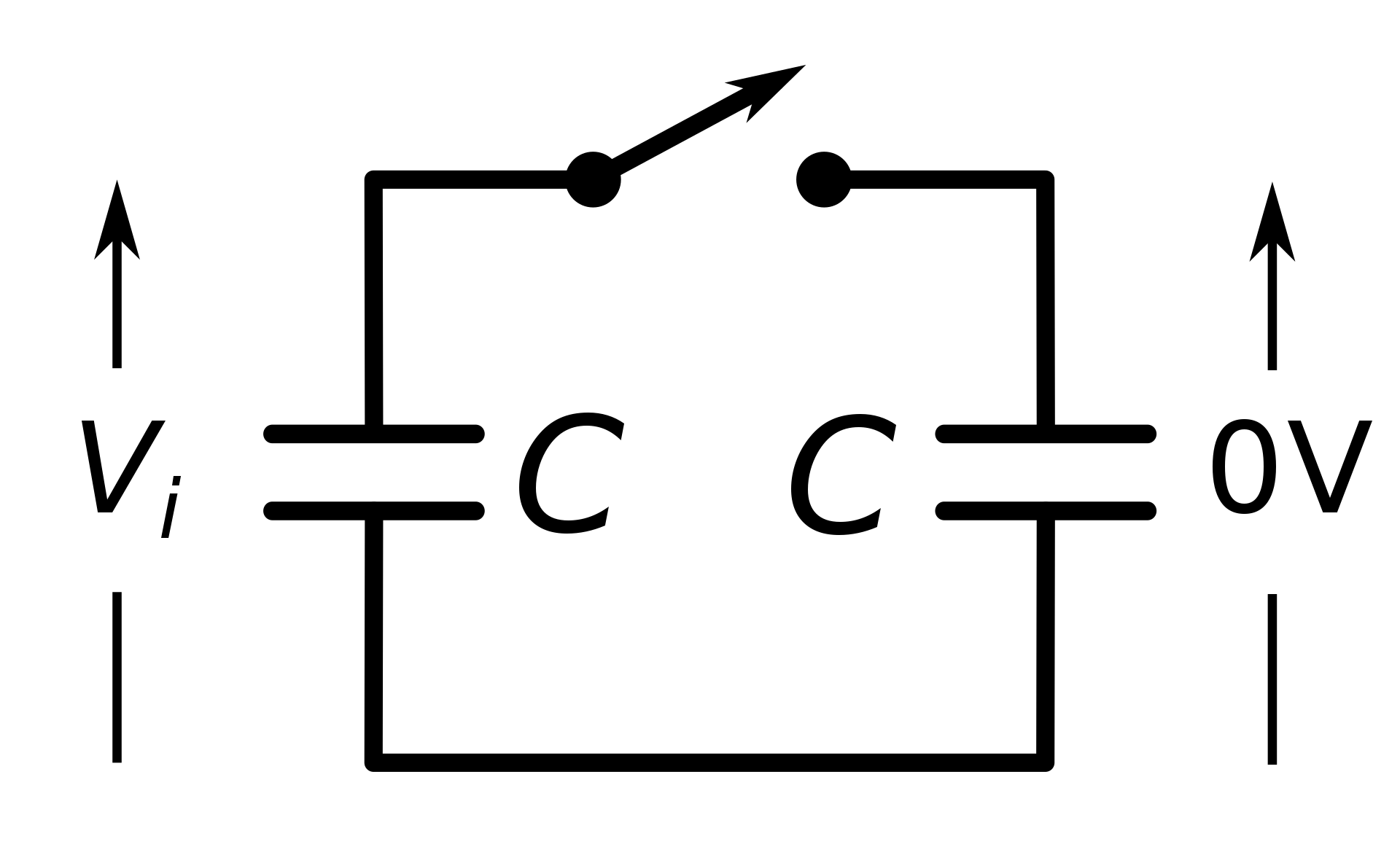 The solution is that, in reality, our circuit is not ideal. We have assumed the wires in the circuit has zero resistance and inductance. If this really were the case, the current would be infinite when the switch was closed due to a potential difference with zero resistance!

If we were to just introduce resistance, we would see that the current in the circuit when the switch is flipped would decay exponentially to reach the steady state solution we found above (equal charge distribution. This is an RC circuit. In the process half the initial energy would be lost.

In reality there would be both inductance and resistance in the wires, so we would have an RLC circuit. In this case the steady state would eventually be reached again, but instead of exponentially decaying, as in an RC circuit, the current would take the form of an exponentially decaying sinusoidal wave (well depending on the relative values of R and L, it might just decay without any oscillation anyway, in the so-called "over damped" case).

Your answer is wrong in the sense that the charge will not be equally divided between the plates of the two capacitors. And the reason is that the capacitors have different capacitances. In this case you need to apply Kirchoff's voltage rule to get the correct equation. If $Q$ is the total charge on the charged capacitor before discharging starts and $Q_0$ is the charge on the uncharged capacitor, then by Kirchoff's voltage rule, we have $$\frac{Q-Q_0}{C}+\frac{Q_0}{C_0}=0$$

Hope this helps you.

FOR BETTER UNDERSTANDING,Go to YouTube and see examfear capacitance part 6.Watch this and you will understand what I am saying.

Not the answer you're looking for? Browse other questions tagged homework-and-exercises electrostatics charge capacitance voltage or ask your own question.

1
When a fully charged capacitor is used to charge another capacitor, how does voltage disappear?