What is a formula for calculate muscle strength for the size? [duplicate]

I was curious by the world record for locomotion of animal. Fastest, Longest, Highest, and many kind of similar records

Which, I also have heard that, muscle will have more power in smaller size. That made small creature like flea have far more advantage

So tobe really fair record. I think it should calculate for compensate that, if all animal really scale into the same size, how muscle strength will be scaled into that size

If flea was really scaled up into the same size as hare (If I recalled hare has record holding for highest jump?), flea muscle strength should really drop dramastically. But now who will win the longest jump competition?

So I want that formula to scale the record of animal. For I can find the best mechanic of body plan. Is there a formula like that?

There is no simple formula for the force provided by a muscle, as this depends on a number of factors (such as how often this muscle is exercised).

Given this observation, what is known generally is that the force that can be provided by a muscle depends on its area, whereas the weight of a body depends on its volume. Thus, in the case of the flea that you discuss, the muscles of a "super" flea twice the size of "normal" flea would be $4\times$ as strong, but the weight of the flea, which increases like its volume, would be $8\times$ the weight of a normal flea. The super-flea would not be able to jump as high as the regular flea.

Nevertheless, some interesting observations based on this technique can be made. For instance since the amount of blood that circulates in the body depends on the volume of the heart, and this circulation is required to maintain constant temperature, larger animals generally have slower heart rates than smaller ones. Likewise, since the aerodynamic lift depends on wing area, smaller birds (like hummingbirds) for which a larger portion of the mass is in the body cannot glide very well and must beat their wings faster than larger birds (such as albatrosses or condors). Of course there are exceptions as some animals have special adaptations, but clearly there are comparatively fewer insects in polar rather than warmer regions.

An interesting analysis related to your question on muscles was be done on rowing times. In the paper Rowing: a similarity analysis, published in Science 173.3994 (1971): 349-351 by Thomas A. McMahon, the author analyzed "why should larger boats containing many oarsmen go faster than smaller ones containing fewer oarsmen?". McMahon used dimensional analysis to show that, for similar boats, racing times should go like $n^{-1/9}$, where $n$ is the number of oarsmen. His data fits very well his model, as you can see below. 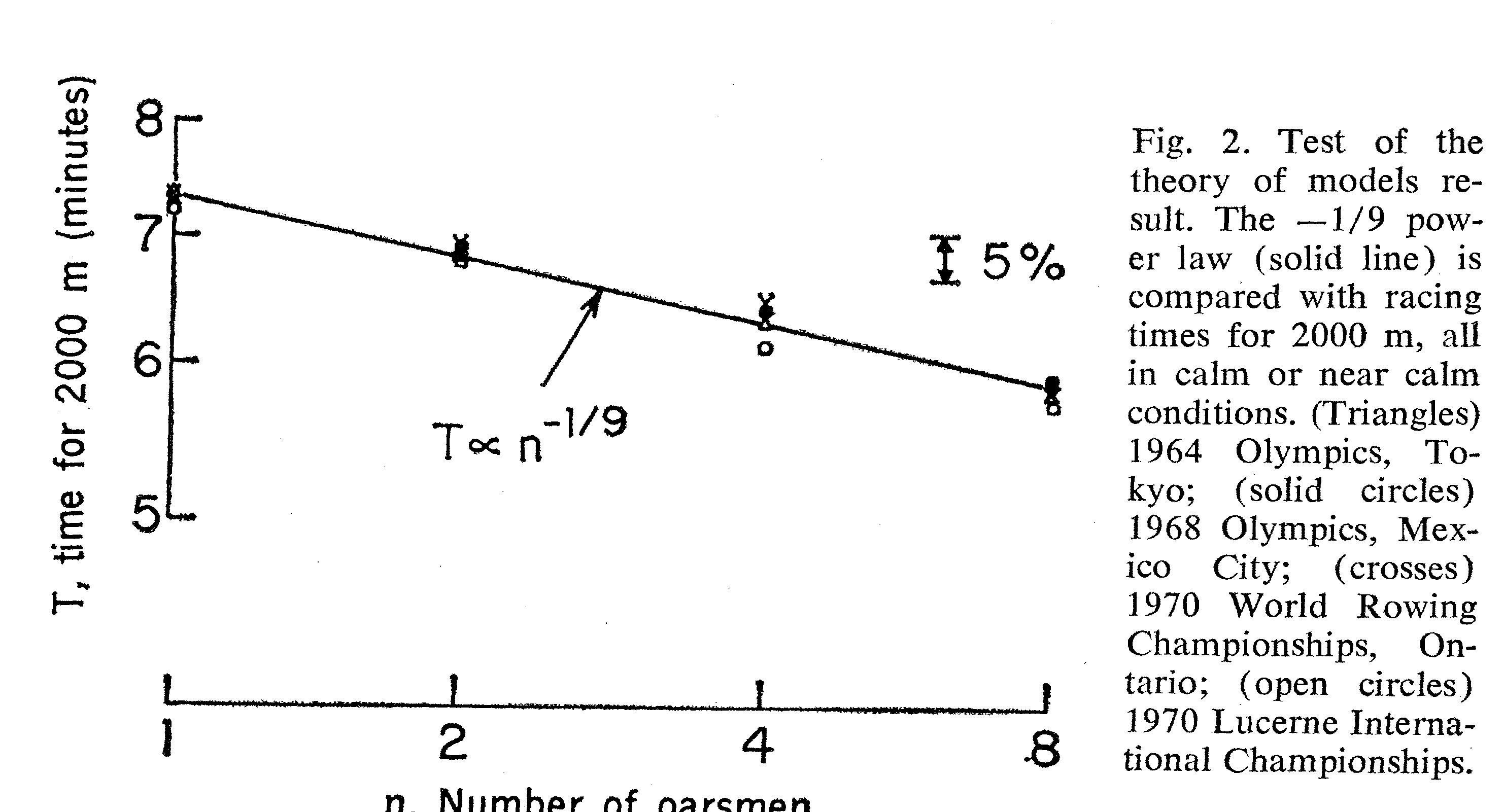 (See also here for application to a different type of (nonbiological) system).

If you want further readings on this there is a nice chapter in the book by John D. Barrow and Frank J. Tipler: The anthropic cosmological principle. (1987) The chapter I'm thinking of is self-contained and you don't need heavy quantum mechanics or cosmology to read this specific chapter.

11
Why are smaller animals stronger than larger ones, when considered relative to their body weight?
3
Estimating the yield of the Trinity Test using dimensional analysis

2
The velocity formula $\mathbf{v} = \mathbf{u} + \mathbf{a}t$ for 1D, 2D, 3D . What is the difference?
1
Problem with formula for parabolic motus
2
What was the motivation behind the work formula?
1
How to derive the formula for angular velocity in three dimensions?
1
What is the formula to calculate the distance covered in a specific time (e.g 3rd second, 4th sec…) by a contantly accelarated body?
1
Forced oscillation and resonance: formula for the externally applied force