Does a neutral particle feel the electric pull?

Do neutral atoms, neutrons, neutrinos, etc. feel zero electrostatic force, or if they feel two equal and opposite forces that cancel each other?

Most chemistry happens between neutral atoms. There are the so called "spill over" forces , like the van der Waals ones, which allow for electromagnetic bondings between atoms and molecules. This is because the orbitals of the electrons in the neutral atoms have "shapes" which allow the positive regions around the atom, from the positive nucleus charge.

The neutron has a magnetic moment and is composed of three charged quarks which are bound by color forces, QCD. This is a very strong interaction, and the spill over of this interaction generates the strong nuclear field that binds nuclei together. In comparison the coupling of the strong being 1, the electromagnetic is 1/137, so any electromagnetic "feel" in making up nuclei with neutrons and protons is a higher order effect.

The neutrino feels the weak interaction only.

At the particle level it is the quantum mechanical probabilities that control the dominant interactions, and those are calculated using feynman diagrams.

Mathematically, 2 opposite forces which cancel each other is the same thing as no force at all, so there is no physical difference between the two but I understand your question, and here is my answer:

For a particle which isn't made of charged particles, the answer is simple: $q=0$ so $F=0$. So neutrino's, for example, don't interact with electric and magnetic fields at all and feel no force at all.

But, an atom which isn't an ion has a total charge of zero but is made of electrons and protons which are charged. This property makes it feel electric fields from neighboring atoms and be repelled / attracted, but this interaction is very week because of the zero net charge. You can read about it more in this Wikipedia page Van der Waals force.

A neutral particle such as a neutrino or a neutron does not experience any electrostatic attraction because they are no charged.

The above statement appears to be contradicting our daily experiences. It is often stated in textbooks that charged particles attract neutral particles. This is so because of induction of charges on the neutral body. 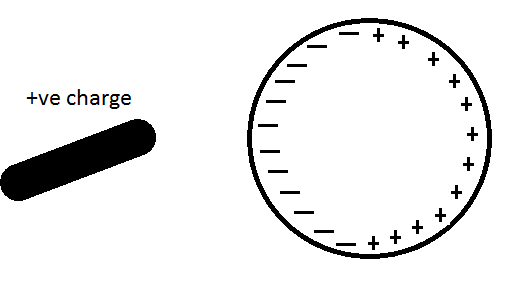 If you had a neutral insulator or a dielectric instead, the electric field due to the charged body would polarize the uncharged body which produces a charge distribution similar to that of conductors. For the same reasons as mentioned in the conductor case, the insulator/dielectric experiences a net attractive force. 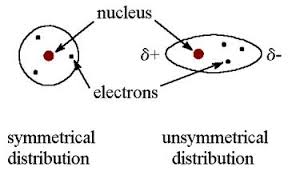 If you had an atom, the electrons of the atom behave in a similar fashion. The electrons in the atom tend to spend more time in the region closer to the negative body. For similar reasons as that of the previous two cases, the atom experiences a net force. This force is known as ion-induced-dipole interactions.

Elementary particles such as neutrinos and neutrons

Neutrinos, neutrons, etc. are particles and hence there can be no induction of charges on them. Therefore, they are not attracted by charged bodies.

17
Do neutrons exhibit momentary small charges due to the movement of its quarks?
2
Why does a plastic comb attracts tiny bits of paper if it is an insulator?

12
Rope tension question
4
Will gravity pull together two bodies from the other side of an empty universe?
0
Is there a normal downward force here?
0
Electric Field and Neutral Objects
1
Electric Fields in a Neutral Object
2
Will two touching, neutral conductors in an electric field separate?
0
Electric potential and work
0
Electromagnetic force between neutron and proton