Why is steam a good working fluid for heat engines?

Steam (gas-phase H2O) is very commonly used as the working fluid for external-combustion heat engines. It seems to me that it ought to be a poor choice, because:

Instead, the abstractly correct choice would seem to be a permanent, inert gas; dry nitrogen and dry air are readily available for cheap and should be plenty inert enough for most applications (maybe at very high temperatures you go to helium or argon). But "hot air" reciprocating engines are rare, and nobody tries to build gas turbines that expand the gas all the way down to ambient—instead they use the exhaust as the hot reservoir for a steam engine!

There must be something I'm missing. Please explain.

Other points aside, I would start by stating that a fluid with low specific heat, as you speculated, is not necessarily a good choice; I suspect that would usually be bad indeed, though it depends on more factors.

How a heat engine works, in a single work cycle, can be roughly modelled by adiabatic expansion. I copied over the image: 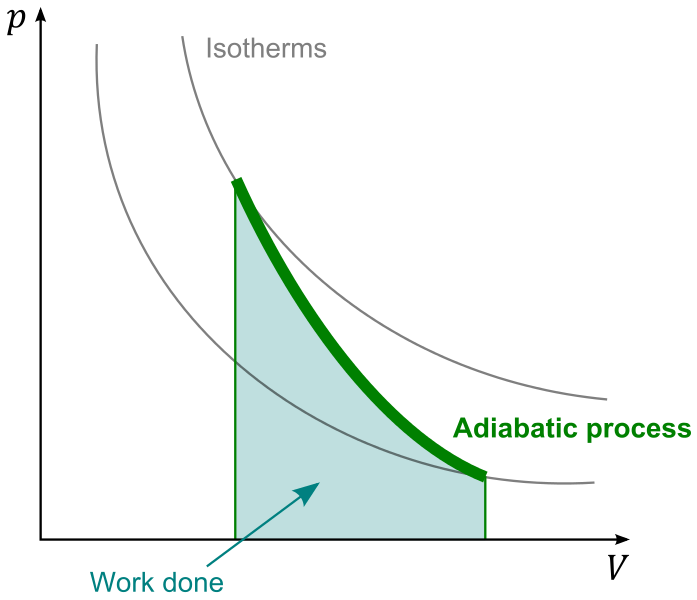 The working fluid, typically gas, does (positive) work by moving bottom-right, increasing $V$ and decreasing $p$, also $T$. For a simple and rough estimate, let's assume the fluid is ideal gas; it usually is not very far from that in typical civilian engines. Then the isotherms have the form $$p \propto TV^{-1}$$ and the adiabatic curve $$p \propto V^{-\gamma}$$ where $\gamma = \frac{C_P}{C_V}$.

With these in mind, let's start interpreting this graph; first note the fact that

Then let's think about its "slope": is it better to be steep, or flat?

I would say the flatter the better.

Being "steep" means it undergoes a greater change in $p$ and, somehow less (compared to a flatter one) of that in $V$; think about it. At the very best we can have $p$ stop at 1atm, so for a good output from a steep curve, we would need to start at a $p$ much higher than 1atm. That means we would need to design our engine so that many parts need to sustain a lot of pressure; we may need a super beefy pressure chamber for heating the working fluid. We would also need heavy moving parts so as to sustain, in case of failure e.g. the output shaft is stuck stationary, possibly the full pressure as it comes out of heating chamber. Such added weight would very likely contribute to the total efficiency negatively, as well as making the machine harder to build, and more dangerous.

So, assume you agree to that, we should prefer a flat curve, so that the pressure does not change dramatically, but doing the work gradually over a greater expansion. Observing that, in most cases, the isotherm curve shall decend (how could it be hotter after doing work?), meaning $\gamma > 1$, the best we can hope for is a $\gamma$ that is close to 1. That is achieved with a high specific heat.

And when it comes to high specific heat, water is probably the best choice that is cheap and safe. I do admit that the great amount of energy involved in phase trasition is usually lost, but you can recycle some of them, e.g. we can heat cold water with the exhaust vapour.

I am thinking ships played a role in this. At sea you need fresh water so you heat it to evaporate it for showers, drinking water, laundry, etc. So it just seems logical that a steam turbine would fit into this engineering mix. When I got out of the navy in the mid 70's most of the ships were steam plants. Once the military heads in one direction it brings a lot of industry with it.

Not the answer you're looking for? Browse other questions tagged thermodynamics heat-engine or ask your own question.

29
Why do turbine engines work?
3
Can you extract energy from "hot" things without a temperature differential?
1
How is isothermal expansion/compression physically possible when it assumes heat flow between equally hot bodies?
2
How is the efficiency of a heat engine related to the entropy produced during the process?
1
Formula for the heat input in a heat engine
0
Gasoline has a very high molar heat capacity. Is this a good thing for its use in engines?