Most Fusion reactors, and the leading ones like JET, use high temp. plasma and confine it. So, the plasma would approximate the Maxwell- Boltzmann distribution. This means that only a small portion of the plasma has enough energy to fuse. But, collisions are much more often, right? Since not all collisions result in fusion, the cross section of collision is much higher than the cross section of fusion. Is this true?

Am I right? If approximately all the collisions resulted in fusion, how much more energy would we be able to produce?

It is true that not all collisions result in fusion. Keep in mind that we have matter in the plasma state here. Since a plasma is basically an ionized gas, we now have Coulomb collisions: a charged particle has an electric field due to its charge and therefore interacts simultaneously with a lot of other charged particles. This is different than in an ideal gas. As you said, the particles in the tail of the Maxwellian distribution will do the fusion reaction, which is then, by definition, a minority.

You are also correct with your assumption about the ion temperature (energy): this is the one that needs to be high. Since it is quite common, though, to heat directly the electrons in large fusion experiments (note, not exclusively), we also have to ensure that the electrons transfer their energy (via (Coulomb) collisions) to the ions.

For a self-burning plasma, you need to ensure that you have enough fusion reactions to keep the plasma alive. What that means is that the products of the fusion reactions (He-nuclei and neutrons if we consider the most likely reaction, D+T) must transfer enough energy to the plasma (consisting of D and T and electrons) so that more fusion reactions can be started. The neutrons do not play a role here since they have no charge and barely interact with the plasma (as compared to the He-nuclei). So, we do not need all collisions to result in a fusion process, just enough to keep the fire burning. It actually sounds highly in-efficient (if not to say impossible) to ensure that all collisions result in a fusion process since you then could not rely on a Maxwellian distribution (you would always have low-energy particles then) but had to create some fancy energy distribution... (and, of course, assume that you do not have any losses at all).

Edit: I have just realized that you asked for a comparison between the Coulomb cross section (also referred to as Rutherford cross section) and the fusion cross section.

To do that we must keep in mind that we are in a plasma, where small angle collisions dominate, i.e. the single Coulomb collision results in a very small scattering angle, let's say it is $\theta=1°$. The cross section can be written as (see wikipedia)

with $Z_{1,2}$ the charge numbers, $E$ the initial energy of the impinging particle, and $\theta$ the scattering angle.

Formulas for the fusion cross section can be found for example in the paper by Bosch or in fusion text books.

Doing now the comparison for a D-T collision and a scattering angle of $\theta=1°$, should result in the cross sections as shown in the plot. As you can see, the Coulomb cross section is orders of magnitude larger than the fusion cross section (like you said). 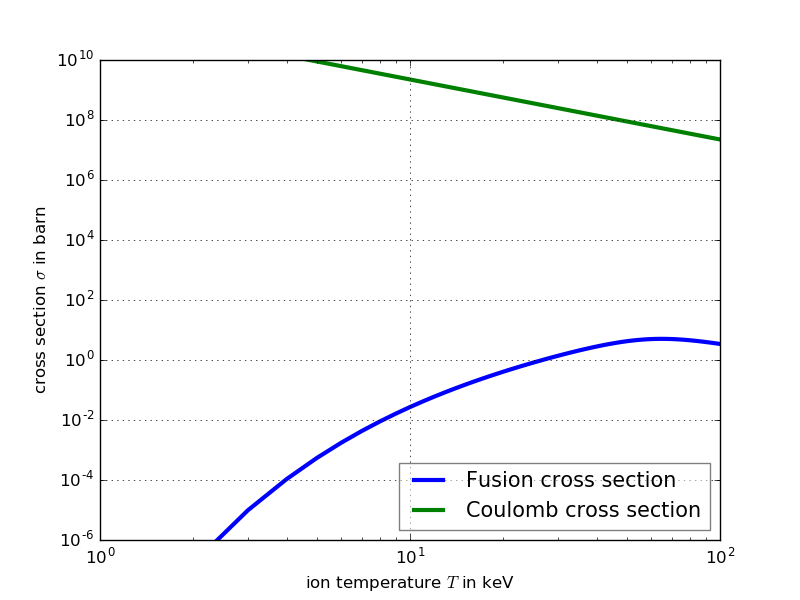 2
How does the internuclear repulsion vary in Hydrogenic atom collision?
7
How large should an optically large fusion reactor be?
2
Why can't two hydrogen atoms be slowly "pressed together" (fused to form helium) with some advanced device (not collided at high speed)?
2
What prevents high Beta plasma confinement and how to overcome it?
1
Do elastic collisions occur if a part of the plasma is heated to fusion conditions?
2
Why do tokamaks and most other fusion reactors use neutral plasmas?
1
How does fusion in Tokamak reactors, which produces alpha particles, lead to heating of the plasma?
1
How do alpha particles heat the plasma in tokamaks and what does that trajectory look like?