I'm new to physics, and I just learned what velocity is. From what I learned, velocity is, displacement/time. But, I'm confused about what displacement and distance is, and how is affects velocity. So, if displacement is how far you are from your original position, then you would have a displacement of 0m if you ran 500m and back in 10 seconds, and stopped in the same position. The distance, however, would be 1km, I'm guessing. Now, if I use displacement in my formula, then I would have a velocity of 0 m/s. But, if I used the distance, it would be 50 m/s. So, which would I use?

You are right regarding the meaning of displacement and distance. Displacement denotes how far (in direct line) you are from the origin. Distance is the length covered.

As for velocity you need to distinguish between instantaneous velocity and average velocity.

The instantaneous velocity is defined as the time derivative:

Note that this velocity is a vector describing how fast (=speed) and in what direction you are moving at any moment in time (therefore the time dependence). $\Delta (\mathrm{displacement})$ is the displacement and is also a vector, going from a point along the path reached at time $t$ to a point reached at a later time, $t+\Delta t$ as in the image above.

As you can see from the image, if you look at the displacement after a very short time (i.e. you take the limit $\Delta t\to 0$), the displacement vector (and the instantaneous velocity) will in fact be along the track.

Generally, if physicists talk about "velocity" this instantaneous velocity (vector) is meant.

Speed is the magnitude (how fast?) of the velocity vector

This is the quantity displayed on your car's speedometer and it does not contain any information about the direction.

The average velocity is defined as:

If you return to the origin during the time period $\Delta t$, the integral on the right side will evaluate to zero because the directions of the instantaneous velocities will average out: essentially in order to return you have to reverse the velocity at some point.

The average speed is the total distance divided by the time taken:

If you return to the origin, the average speed is not zero because here the distance (and not the displacement) enters the equation.

So, which would I use? 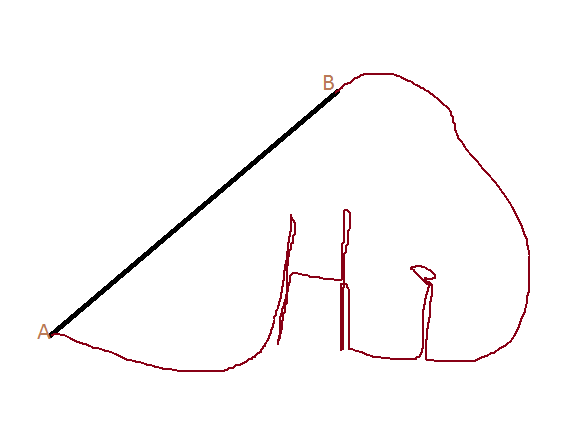 By definition, velocity is given by:

By definition, speed is given by:

In your case, you return to the same point, therefore, you have a net displacement of zero but the net distance traveled is not zero.

distance and displacement of an object on a straight line

What is displacement? Position relative to a reference point or change of position

Not the answer you're looking for? Browse other questions tagged kinematics velocity distance displacement or ask your own question.

9
What is displacement? Position relative to a reference point or change of position
0
Distance and displacement of an object on a straight line
-4
Does differentiating a distance with respect to time give velocity?

1
Instantaneous velocity is slope of displacement-time curve?
0
How to tell if area is displacement or distance?
0
Obtaining position from a curved velocity vs time graph
0
Displacement and position for a ball thrown up into the air
2
Is velocity the derivative of position, distance, or displacement?