How strong can an electromagnet be?

What's the theoretical potential for how strong electromagnets can get? If you just kept coiling a solenoid longer and wider, and fed more and more current into the coil, would the field strength in the middle get arbitrarily dense?

This is the closest related question I could find: How to wire a STRONG electromagnet?

I understand that the core will eventually saturate and thus stop helping to increase the field. But I think increasing the other parameters still makes for a stronger magnet.

Superconducting magnets can get quite high fields, higher than the limit given by the core electromagnets, as the LHC experiments have demonstrated, but are subject to limitations of the cryogenics and the materials:

Superconducting magnets must operate below both the critical temperature and the critical field of the material from which they are constructed.

Careful design is used to find a fine balance between wire composition, diameter and distribution along the axis of the coil form. As part of the design process many variables are considered both with respect to the general field profile but also the manner in which the magnet will be used. 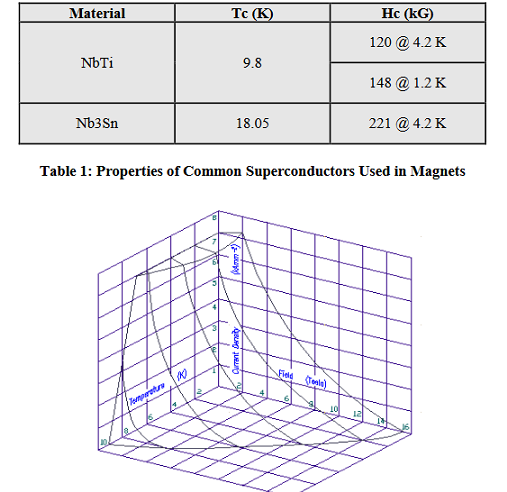 So the limits on obtainable magnetic fields come from the materials used.

According to this page:

But if you increase the magnetic field to a certain point, electron and positron pairs will start being created which will be accelerated apart from eachother. This is decreasing the energy of the magnetic field untill it gets below critical energy. So in that sense there is an upper practical limit.

1
Does an electromagnet have a magnetism limit?
3
How to wire a STRONG electromagnet?
0
Magnetic levitated tower - magnetic fields and tensile strengths of materials