... First, we consider hinge (or pin) joints. There are several ways to estimate the joint angle of a hinge joint from the measured accelerations and angular velocities. Many of them use strap-down integration and some coordinate transformation.

I'm not sure if this term is used widely, but since it's about integration and kinematics, I thought it would have been a good idea to ask it here.

Note: the context may not help much if you don't know anything about kinematics and the study of human body analysis. Feel free to migrate this question to a more appropriate Stack Exchange's website, if you think this belongs to another website.

There are essentially two ways to mount accelerometers for the purpose of navigation:

Note: I've still not fully understood the concept of "strapdown inertial integration", and eventually I will edit (or you can edit) this answer to add more details, but here's at least an initial attempt to answer my own question based on the definition given in a paper. The paper contains other details, which for now I've not gone through since I have not too much time, but if you want to help to improve this answer, feel free to do it!

Strapdown inertial integration (or dead reckoning) calculates the current position from an initial position using measurements of angular velocity and specific force obtained by the inertial sensors, as shown in Figure 2. 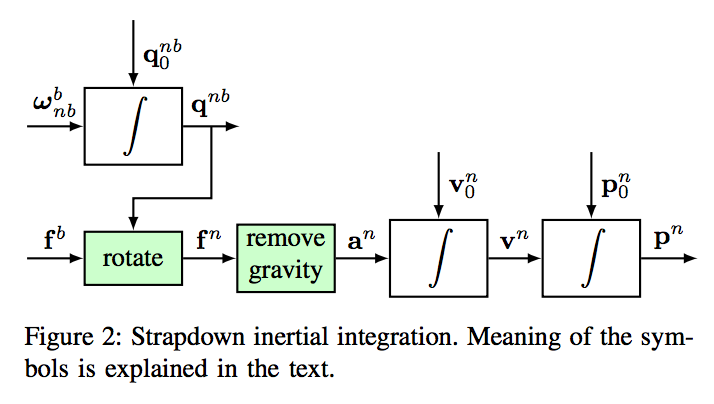 First of all, let's try to clarify the meaning of this paragraph by explaining what's a specific force. According to this Wiki's article regarding specific force:

Now, still according to the paper I'm linking you to above, and related to Figure $2$:

The orientation $q^{nb}$ is calculated by integrating the angular velocity, $\omega^b_{nb}$, measured by gyroscopes. Then the global acceleration ($a^n$?) is obtained by rotating the specific force measured from accelerometers, $f^b$, and correcting the gravity.

Finally the velocity and position relative to an initial point, $v^n$ and $p^n$, are determined by the integration of the acceleration, $a^n$.

Note: I've omitted some details and explanations that the authors of the paper give to simplify things (for now).

Note: this is only my conclusion based on my limited knowledge, so it could not be completely correct or accurate.

Roughly speaking, "strapdown inertial integration" seems to be a procedure where mathematical integration is used in multiple phases of the same procedure.

So the procedure seems to take the angular velocity given by a gyroscope and integrates it to somehow obtain the orientation (a vector) (of what?). Now, somehow we need to rotate the specific force (a vector?) measured by the accelerometer to obtain a "global acceleration" (what is this? why do we need to rotate?). Then, once we have $a^n$ (which is the global acceleration without the cause of gravity?), we can integrate it once and twice to obtain respectively the velocity and position (of what?)

Not the answer you're looking for? Browse other questions tagged kinematics terminology integration or ask your own question.

29
When is Lebesgue integration useful over Riemann integration in physics?
1
Deriving equations of motion using integration
2
Integration on a general equation for instantaneous angular acceleration
0
What is this integration?