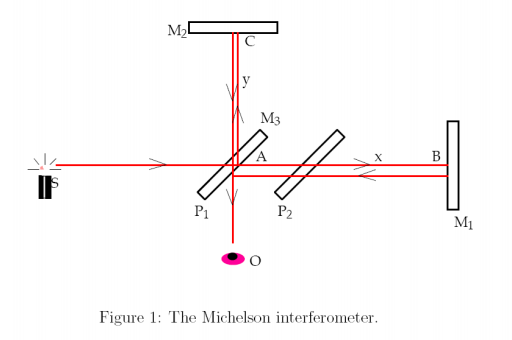 I have never done the experiment so as far as I understand, if the mirrors $M1$ and $M2$ are perpendicular to each other the observer at $O$ will see a circular fringe pattern. If additionally $M1$ and $M2$ are equidistant from the beam-splitter $P1$ ($\Delta d = 0$), then the observer does not see any ring (just a single dark fringe).

Question 1: Where does the observer see the fringes? On the beam-splitter $P1$ or what is the "screen"?

Question 2 Assume we start at the point where $\Delta d = 0$. There is just a single dark fringe (taking up the entire "screen").As we move one of the mirrors by $\frac{\lambda}{4}$ A light circle fringe should appear inside the pattern shifting the dark one outside. How thick is it? Are they both of equal thickness and taking up together the entire screen? Then we shift again by $\frac{\lambda}{4}$ a dark circle comes from the inside, now we have 3 circles. Again are they of equal thickness? As we shift more and new circles appear from the inside at what point do the outside rings start to disappear? Or do they not disappear and the rings just get pushed closer together?

Here is a schematic diagram to show how the circular fringes are formed using the Michelson interferometer.
These fringes are sometimes called fringes of equal inclination or Haidinger fringes. 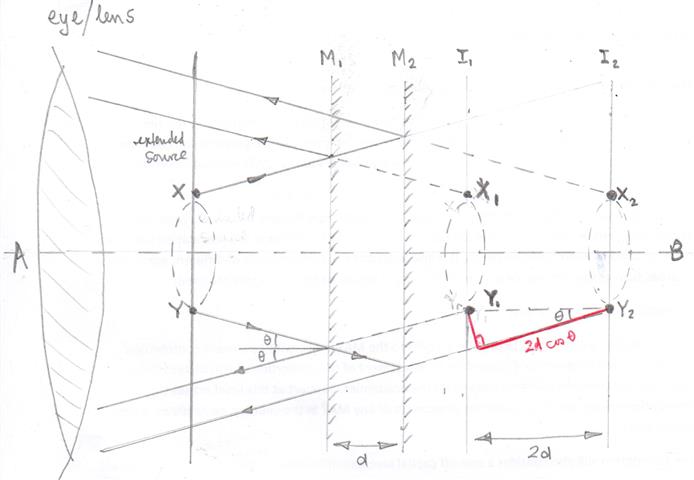 The light comes from an extended source and is reflected off two "parallel" mirrors $M_1$ and $M_2$ as shown in figure 1 of your source.

As you can see from the diagram you will observe parallel rays so your eye (or a lens) will be focussed at infinity.
Because the aperture of the eye is relatively small you will not see many fringes unless you move your eye.

The is another point on the extended source $X$ which will also produce interference at an angle $\theta$ and indeed there are a whole number of such sources which are equidistant from the axis of symmetry $AB$.
This results in the fringes being circular.

When the two mirrors are coincident you will not see a uniform blackness due to imperfections in the mirrors.
As you move one mirror away from the outer relatively broad fringes will collapse into the centre but more will fringes will appear from the sides and those will be sharper.

One tip when aligning the interferometer is to stick a pin which is illuminated from the side of interferometer on the diffuser ? ground glass plate.
Then look through the interferometer and you will see the images of two pins.
Adjust the separation of the mirrors and their orientation until there is a position of no parallax (no relative movement between the images when the eye is moved) for the two images.
Using a source (or a while light source) should enable you to make the final adjustments to observe the zero order fringe. 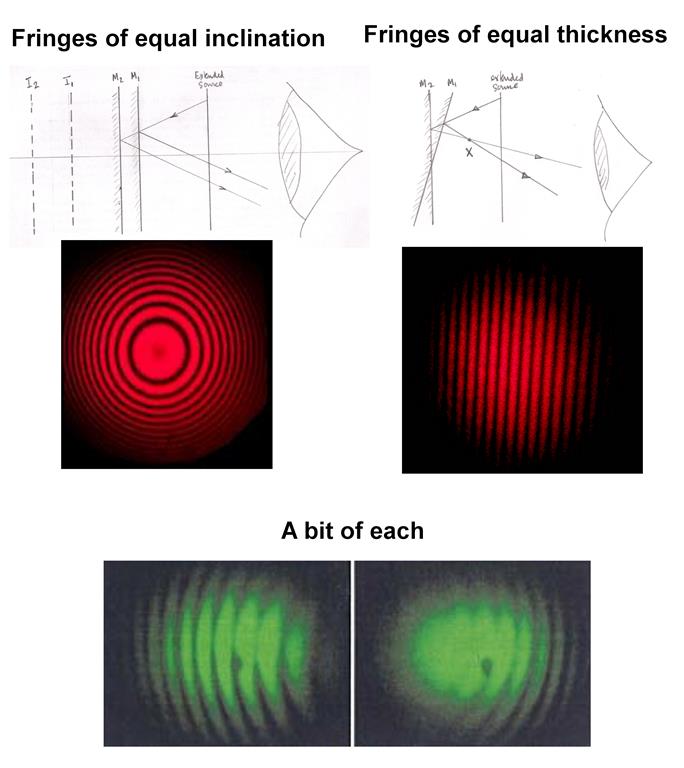 In general the apex will not be in the field of view and so you will get a "mixture" as shown for the green fringes.
The difference between the two arrangements is that the inclination of one mirror relative to the other has been reversed.
This is what you will normally see before adjusting the mirrors to get circular fringes.

Ans1. you can put screen (as you want) anywhere from P1 to Down-side (towards "O"). & the only thing that changes as screen distance is the corresponding Radius of the Rings.(bigger or smaller pattern correspondingly)

Ans2. when you move M1 from "0" to "lemda/4" to "lemda/2"..etc new fringes will appears and these fringes will be of decreasing thickness (with the central will be thickest).. see the link below.... thanks
https://www.google.co.in/imgres?imgurl=https%3A%2F%2Fphys.libretexts.org%2F%40api%2Fdeki%2Ffiles%2F5970%2FCNX_UPhysics_36_05_Fringe.jpg%3Fsize%3Dbestfit%26width%3D488%26height%3D345%26revision%3D1&imgrefurl=https%3A%2F%2Fphys.libretexts.org%2FTextMaps%2FGeneral_Physics_Textmaps%2FMap%253A_University_Physics_(OpenStax)%2FMap%253A_University_Physics_III_(OpenStax)%2F3%253A_Interference%2F3.5%253A_The_Michelson_Interferometer&docid=gWd0gF8gzxVk0M&tbnid=t3RvDVX9m5UXEM%3A&vet=1&w=488&h=345&bih=944&biw=1680&q=michelson%20interference&ved=0ahUKEwiu0fqyhMXSAhUIr48KHaKHAm4QMwg6KBUwFQ&iact=mrc&uact=8

Your first statement is not completely accurate. M1 and M2 do need to be equal distance or (equal full wavelengths) from the beam splitter in order to get interference and create the rings but the final distance to the screen will also determine if the center is solid (dark) or light. It will change every 1/2 wavelength from the screen. Q1-The two recombined rays are projected onto a screen. You do not want to look directly into the on coming rays. Q2-The thickness of the rings get smaller as you move away from the center. The number of rings doesn't change but the number that you see depends on the distance, how its focused and the overall lighting or intensity.You can focus on a few in the center or hundreds with each one getting thinner and thinner as you move out.