Density of states in $k$ space for the BCS Hamiltonian

I would like to understand how we can find the density of states in $k$ space for the BCS Hamiltonian.

An eigenvector is then $\psi_k=\delta(k-k_0)$ and we know how many modes we have in an interval $dk$ because of Fourier series. If we have a function confined in a box of size $L$, we can periodise the function with period $L$ on all the space, and two Fourier modes will be separated by $\frac{2 \pi}{L}$.

To summarize: the $k$ is really a Fourier mode here. And because of Fourier theory I know how many modes I have in $dk$.

and after diagonalisation, we have

$k$ is now just a quantum number used to "note" an eigenvector, it is not a Fourier mode. How can one determine the density of states in $k$ space now?

You almost get the point, although the "Fourier mode" is not the right terminology here. The problem with BCS quasiparticles is that they are not electron modes, but electron-hole superposition modes. This means the quasiparticle is partially electron and partially hole (their probabilities add up to one). On the other hand, the density of state (as measured in STM or ARPES experiments) only counts the density of electron component, therefore each quasiparticle mode in the spectrum must be weighted by the portion (the probability) of electron in that mode. So knowing the BCS quasiparticle dispersion is not sufficient to calculate the density of state, we must also know the amount of electronic component at each point. One can go on with this idea and carry out the calculation, but this undergraduate-level approach is not systematic and is sometimes tedious. 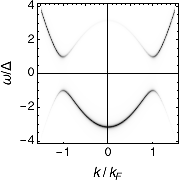 One can see the electron dispersion (opening upwards) is kind of "broken" and gradually transition into the hole dispersion (opening downwards) across the Fermi momentum with the spectral weight fading away as we go deeper into the hole band. This is typically what can be seen in the ARPES experiment. Now the density of state can be obtained by simply collapsing the spectral weight to the frequency space (by integrating out the momentum), which gives something like the following (let us say in 2D),

We can observe the BCS gap of $2\Delta$ across the Fermi energy ($\omega=0$). Two superconducting coherence peaks appear on the gap edges, as electrons are depleted in the gap and piled up to the coherence peaks. In this example, the gap has a U-shape because the Fermi surface is fully gapped. In $d$-wave superconductors like cuprates where the spectrum is nodal, there will be a V-shape gap instead in the density of state. This is what can be seen in the STM $\text{d}I/\text{d}V$ (differential conductance) spectrum.

1
Density of states of Bogoliubov quasiparticles