You put a block of dielectric material in its path. When the wave enters the material the speed reduces to the material speed of light. When it exits speed goes up again. In the broadest sense of the term 'acceleratiom' this would be it.

Nope. Radio waves are oscillating EM radiation at a constant velocity of $3 \times 10^8 ms^{-1}$ in a vacuum. That is the speed limit. 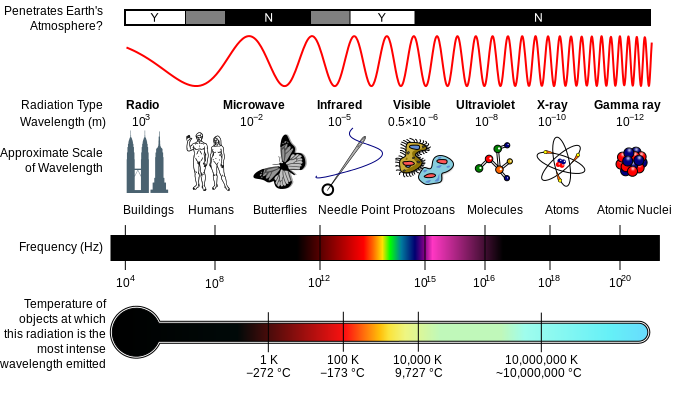 The electromagnetic wave spectrum consists of vaguely defined categories as shown in the picture. Radio waves are a part of it.

In the quantum world, the electromagnetic radiation is carried by a stream of photons. These photons are said to have zero rest mass within the limits of experimental error. A particle having zero rest mass must travel at the speed of light.

We have the following equation from Einstein which holds good in all frames of reference:

We also have another equation from Einstein which relates $p$, $m_0$ and $E$:

Since the photon is massless, we get $p$ to be:

We know that photons do have momentum and carry energy. Therefore, we can safely conclude that photons travel at the speed of light ($c$).

If the photons travel at a fixed speed, does that mean that the acceleration of photon must always be zero? Not necessarily. Light can change direction. From general relativity, we know that light gets bent by gravity. By our classical definition of acceleration, light can be told to be accelerated but, however, light is actually moving along the curvature of spacetime, so saying that light is accelerating is not really correct.

Check this question to get an intuition about light moving in space.

Not the answer you're looking for? Browse other questions tagged special-relativity electromagnetic-radiation photons speed-of-light acceleration or ask your own question.

9
Do photons have acceleration?
12
How can the diameter of the universe be so big, if nothing can go faster than light?

4
Radio waves and frequency of photon
9
Do radio waves travel around the Earth or through it?
0
Radio waves lights a florescent bulb
2
Why don't radio waves ruin electronics?
11
Relation between radio waves and photons generated by a classical current
1
Radio Waves / Light: Atmospheric Refraction