So I have a metal sphere of radius R with two hollow cavities with charges -3q and +q at the centers of the cavities. I have a third charge +q at a "large distance r" from the sphere. If I want to sketch the electric field of the system, is the one drawn on the attached image right? 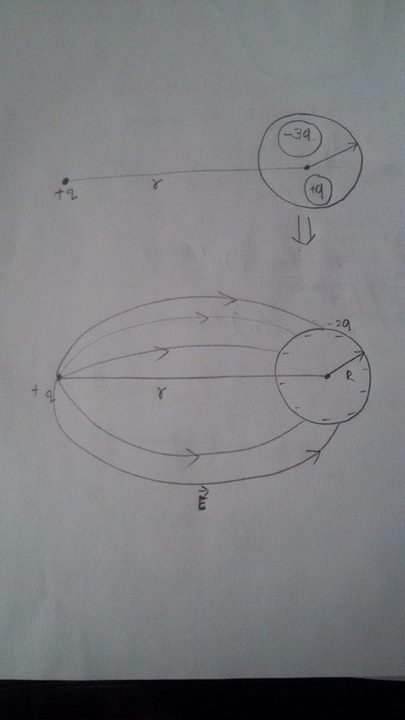 So I assumed that the net charge on the sphere is -2q and for large distance r, the system behaves as if the sphere is a point charge. Does my assumption have any flaws?

Since at very large distances $x>>R$ we can neglect the effect of image charges, your reasoning is correct. I would only modify your drawing to look your field lines like this 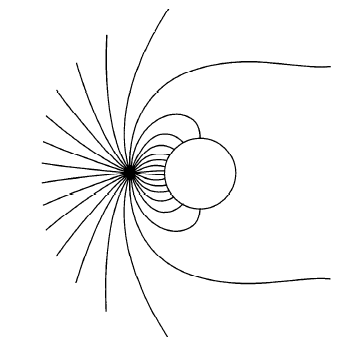 and make sure you have a big enough distance between point charge and sphere! Also I would suggest to reduce sphere radius two times to make sure $x>>R$ holds.

Yes your assumptions are correct but they do not quite agree with what you have drawn.

The charge on the surface of the metal sphere is $-2q$. But if the 3rd charge is much further away than the radius of the sphere then the electric fields close to each will be radially symmetric, ie the same in all directions.

So the field lines should emanate uniformly from each, and they should be normal to the surface of the sphere, not skewed. Twice as many field lines should start/end on the sphere, because it carries twice as much charge. Not all field lines will end on the other charge (if we look only at the local region). If there are no other charges in the universe then within a large enough distance all lines from the point charge will end on the sphere, but half the lines starting from the sphere will only end at infinity. At very large distances from both charges the total electric field will look like that from a point charge -q.

If the distance between the sphere and point charge is comparable with the radius of the sphere then the charge distribution on the sphere will be skewed towards the point charge - the more so as the separation becomes small. However, the electric field will remain normal to the surface at all points on it.

Not the answer you're looking for? Browse other questions tagged homework-and-exercises electrostatics or ask your own question.