What do spacecraft have in common with atmospheric aeroplanes?

Science fiction depicts spacecraft as both deep-space & surface capable. Is this feasible?

I would have imagined a vessel constructed for space travel to have little in common with operating characteristics/requirements of a vessel to operate in atmosphere.

What operational parameters/characteristics do spacecraft have in common with aero-planes?

There is at least one company actively working on a reusable ground to space craft. The Skylon is under development by Reaction Engines Ltd in the UK. Its design is based on the HOTOL which was partly government funded. It stalled in 1988 when funding dried up. REL are still working on the development of the engines, and in April they successfully tested part of its cooling system and they're planning to be at the Farnborough Air Show in July with the results. In case Skylon ever gets off the ground there's, even a User's Manual on their website - a bit premature perhaps!

How real they are is anybody's guess, but they do have a Wikipedia entry.

A craft designed to work both in the atmosphere and in space might look something like this: 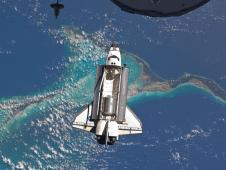 To expand on this a bit:

We've been building atmospheric craft for over a century, and their general form hasn't changed much. The vast majority have a roughly cylindrical fuselage, horizontal wings to provide lift, landing gear, and a propulsion system that works by pushing air or exhaust gas backwards. (Helicopters are an obvious exception; flying wings are another, but they're rare.) It's likely that that's not going to change any time soon.

We haven't had many spacecraft that are also designed to work in the atmosphere. The most prominent example, of course, is NASA's space shuttle orbiter. Its overall shape is very much like an airplane. It has some features that are specific to working in space, or to getting to and from space (rocket engines, thermal tiles, cargo bay doors) -- but those features are integrated in such a way that they don't seriously interfere with its operation as an airplane (or, more accurately, as a glider).

And the requirements for operating in deep space (interplanetary, or even interstellar) aren't all that different from those for low Earth orbit. The craft needs to operate while floating in zero gee in near vacuum. If you could somehow put a working Space Shuttle orbiter a few light-years away, it would probably be able to operate. (Maintaining the internal temperature would probably be the biggest problem.)

A future craft that operates both in deep space and in an atmosphere would, I think, have to follow very similar design principles.

Deep space operation imposes very few requirements on the overall shape of a craft. The International Space Station is an example; it consists largely of long spindly structures that would be completely impractical anywhere other than a microgravity environment. On the other hand, atmospheric operation imposes some very strict requirements -- and meeting those requirements doesn't hurt the ability to operate in deep space.

Balloons are another kind of aircraft that don't resemble airplanes. But due to their low mass and large size, balloons can't move very quickly through the atmosphere, which would make launch and re-entry impractical. I suppose you could deflate the balloon for launch and inflate it for re-entry, but it would be very tricky.

In the very long term, improving technology could change all this, but that's nearly impossible to predict.

Well, it's science fiction precisely because it's not "feasible" with current technology. We haven't yet developed deep-space propulsion technology, so there's no way of telling how it would integrate with an atmospheric craft.

"Realistically", the most efficient spacecraft design might be something similar to Star Trek: We'll have giant spaceships built in space, which will have arbitrary (non-aerodynamic) shapes and won't be able to land on planets. However, the spaceships will contain smaller "shuttle" craft for the purpose of landing on planets, and these shuttles will necessarily be shaped like airplanes.

As for windows/viewports, there's no reason both space- and atmospheric craft can't have them. Deep space craft don't really need actual windows, since there's not much to see. They would probably have high-exposure cameras and telescopes, with real-time viewscreens.

But seriously, we have an enormous hurdle to overcome with interstellar propulsion, and we can be fairly certain that it will remain safely in the realm of science fiction, at least for another millenium.

For operating at high speeds in a fluid such as air, the fluid dynamics are paramount, as is the speed regime.

In low earth orbit, the problem of orbiting debris has to be considered.

For operating at typical current speeds in high orbit or interplanetary space, fluids are not much of an issue, but dynamic stability is, so things have to be balanced and rigid enough not to have problems with bending moments and rotation. Also solar wind and radiation has to be considered.

For operating at much higher speeds in interstellar space, the contents of space are very thin, but not thin enough to be ignored, so some kind of shielded design could have to be considered.

For wormholes or other stuff like that, you're on your own :-)

24
Why do spacecrafts take off with rockets instead of just ascending like an aircraft until they reach space?
9
Why can't airplanes just keep going up?

0
What alternative shapes may a rocket heading into orbit have?
2
Thought Experiment: spinning ping-pong ball with forward motion on International Space Station. What would Happen?
1
Why don't boats have wings?
0
What is surface speed? (airfoil, aerodynamics)
0
Why darts have feathers?
0
At what altitude does oxygen have no effect on the shape of a rocket?