Voltage between the ends of the inductor 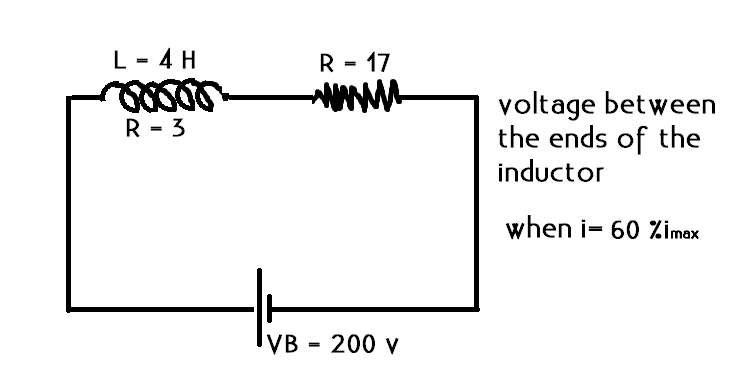 Please help me solve this problem. I have one question

But before that, this is my step by step approach of the problem:

voltage across in the inductor or what?

because the inductor has a resistance.

I recommend you first consider the inductor to consist of a series connection of an ideal inductor and a 3 Ohm resistor. Now you can see that the maximum current you can develop in the system is $\rm{I_{max}=\frac{200 ~V}{20 ~Ohm} = 10~ A}$

The way the question has been written means that you have to make at least one assumption before before you can answer it.

The first thing to say is that if the current has not reached its maximum it must be changing.

What is not clear is whether or not the current started at a maximum and then the circuit was broken (look carefully at the diagram and there is a break in the circuit to the left of the positive terminal of the battery), or the initial current was zero and the current is building to to a maximum value.

Not the answer you're looking for? Browse other questions tagged homework-and-exercises electric-circuits electrical-resistance voltage inductance or ask your own question.

0
Inductor's back-emf vs voltage drop across resistor
2
At $t=0$ the voltage across the Inductor will immediately jump to battery voltage. Why?
0
Deteminining the voltage across an AC source
2
Can Kirchhoff's Voltage Law be applied here?
1
Why do we subtract the voltage of the resistor from the emf voltage to find the terminal voltage?
6
Confusion in understanding the behavior of inductor in RL circuit with DC source
1
How is the rate of current change in an inductor present in a circuit maintained / decreased?
0
How can current flow in a circuit if back emf is equal and opposite to applied voltage?