Say a photon hits some atom.

For a given system that the electron is in, the primary determinant is the energy of the photon. As @DJBunk points out, this is a quantum mechanical process, so the "choice" is fundamentally random. A given interaction will occur with a probability proportional to its cross section. Figure 1 of this lecture shows how the cross section for each possible process varies with photon energy. This plot is for the interaction of photons with electrons in copper. At low energies, the photoelectric effect is the dominant effect. From about 200 keV to about 10 MeV, Compton scattering is the dominant effect. Above 10 MeV, the dominant effect is pair production. At a given photon energy, the relative probability of two processes would be the ratio of their cross sections.

The dependence of each cross section on photon energy should be similar in form for any system; the exact numbers will vary from system to system. Table 2 of that lecture gives the dependence on the atomic number, for example.

It is the energy of the incident photon.

At low Energy (Long wavelengths as in Radio waves and Microwaves, visible light) Rayleigh scattering would dominant, in which the scattered photon would have the same wavelength as the incident photon.

At extremely high energies (X-ray and Gamma rays), the incident photon energy is too high for the electron to absorb and maintain Energy-Momentum conservation (and that is why Photoelectric is observed on bounded electrons whereas Compton Scattering is observed on "Free" Electrons). So the electron would be ejected, Since the incident photon has transferred some of its energy to the electron which it collides with, it will be scattered but now it has less energy. Compton Scattering would dominate.

For each of these processes, it is possible to calculate (or measure) a cross-section that determines the relative frequency at which an event occurs given a large number of photons incident on the atom.

Now, to get to your actual question. You ask what determines which event occurs. This is a fundamental question in quantum mechanics, and often is called the "measurement problem". Consider a universe consisting of only a photon flying towards an atom. If we were to run time forward until long after the photon would have reached the atom, the system will be in a superposition of states including all possible processes (with the correct weighting to give the relative probabilities). It isn't until the system interacts with a larger ("classical") measurement device that one of the many processes is selected ("the wavefunction collapses"). According to the usual interpretation of quantum mechanics, which branch occurs is simply determined by the probability, with nothing in particular causing the selection.

Of course, there are conceptual difficulties around where the boundary between "classical" and "quantum" systems should be. You might find it interesting to read about "decoherence" as one possible mechanism for apparent wavefunction collapse.

I explain how the wavelength interaction explains the Compton Effect in this blogpost.

As far as i am able to comprehend your question, the answer to it lies,according me, as we all know electrons are present in atom arranged in a set of orbitals(not orbits) for an electron to move to the next shell or orbital ,it requires a specific amount of energy(which depends upon the particular atom) .in physics,mainly in quantum nothing is half way done thus when an photon strikes ,for it change its energy level it must carry that energy(equivalent to the threshold),if does than the photoelectrc works -if not,the electron would push it back!..i would like to add that this all is related to the band theory so for a better understanding read it once. All it says is dat there are certain gaps between the bands(orbitals arranged together) therefore u need a greater amount of energy to make it jump. i hope i clarified u ! And i really apologize for my immature gesture, i will surely obey your instructions

All we can ascribe to a process like you are describing ($\gamma + p \rightarrow products$) is a probability. The sum over all process will give us %100. I couldn't find a plot of anything like the process you described, but I did find this plot of Higgs decay products as a example of the probabilistic nature of quantum mechanics. On the bottom axis is the possible higgs mass (now determined to be pretty close to 125 GeV) and on the vertical axis it says given the Higgs mass, how likely it will decay to those products. 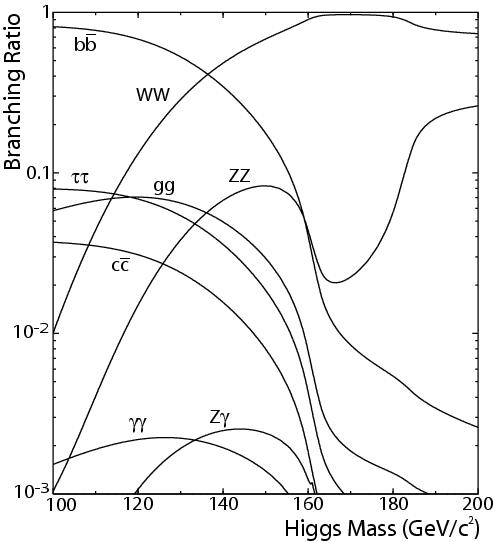 Keep in mind calculating probabilities for hands dealt in a poker game is pretty much the same thing:

All we can do is calculate the probability for a single outcome, and all the possible outcomes add up to %100.

Not the answer you're looking for? Browse other questions tagged quantum-mechanics photons photoelectric-effect or ask your own question.