Electric flux out of a closed surface depends only on the charge enclosed. So, intuitively, the number of flux lines crossing unit area is constant regardless of the material. However, the number of magnetic flux lines crossing a unit area seems to change from material to material. In other words, more lines are generated inside a magnetic material compared to vacuum. Can you please help me understand this concept? What point I miss/ think wrong ? I tend to believe that the number of lines per unit area should be same in all materials it pass through.

In other words, if I place a superconductor (that expels magnetic flux - Meissner effect) near to a magnet, then flux density outside of superconductor would increase from its normal value?

Mathematically, they can be stated as follows:

From the above facts, we can conclude that the force between two charges placed inside a dielectric depends on the permittivity of the dielectric.

where $\epsilon$ is the permittivity of the material.

Why does the permittivity constant change in a dielectric?

We'll use an example to understand. Consider a circular parallel-plate capacitor with a dielectric as shown in the figure. 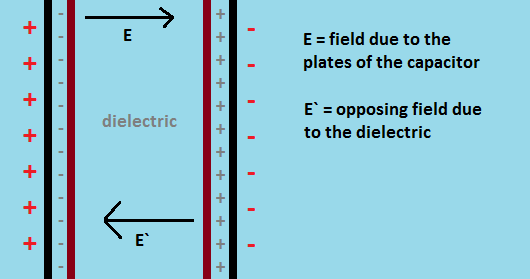 Assume that there is no gap between the dielectric and the plates of the capacitor. The gap seen in the picture is for visual aid only.

Consider a Gaussian surface as shown in the figure (blue color cylinder). We will apply Gauss' law in a unique way: neglect effects of the dielectric. Using this way, we will consider the effect of polarization of the dielectric which would have otherwise been neglected if Gauss' Law was applied with the correct constant ($\epsilon$ instead of $\epsilon_0$)

The electric field due to the capacitor's plates is given by:

The electric field due to the dielectric is given by:

The net electric field setup inside the dielectric is given by:

Let us introduce a new quantity $\epsilon_r$ and define it as follows:

Whoa! The equation $(6)$ is the Gauss' Law in its general form. The change in electric flux in the presence is caused by the induced charges in the dielectric.

Sometimes, while you are deriving an equation or working with a general case, it becomes quite annoying to carry the $\epsilon_r$ term. We have a material independent equivalent of the electric field: displacement vector or electric field density.

It is defined as:

The Gauss' Law can be expressed in another form using $D$.

Integral of the displacement vector flux over a surface is equal to the sum of the charges enclosed by the surface.

A unmagnetized material has its magnetic domains aligned in arbitrary directions. Together, they produce a net zero magnetic moment.

It is not hard to understand that if a larger magnetic field goes through a unit area, the magnetic flux would also be larger.

20
What is the force between two charged objects when the space between them is partially filled by a dielectric medium?
3
Why is the Electric Field inside a hollow sphere zero but not for a ring?
3
Is bound charge defined at infinity?
1
Current flow in a capacitor circuit on insertion of dielectric
1
Effect of a dielectric medium on electric field and electric flux
0
Which law is more fundamental, Gauss's law or Coulomb's Law?