This is a common phenomenon that I observe whilst preparing a meal. Assume that we have a plate of diameter $r$ and we drop it when there is an angle $\theta$ between it and the table and we also apply a force $F$ at the side of the plate.

Suppose that the gravitational acceleration is $g$ how can we determine this plates "wobbling" frequency, how this frequency depends on time and when would this motion stop? 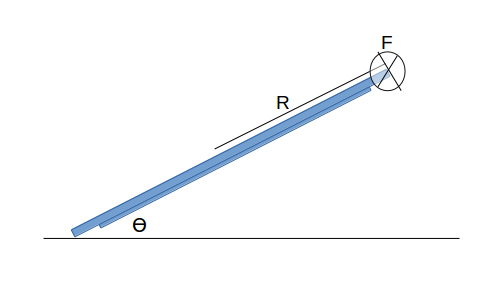 https://drive.google.com/open?id=0B2pRI_pd_h4-WW5ZaHJHay0zQW8 video of the action called as "wobbling"

The frequency of the wobbling plate (or the spinning coin) is an interesting problem. We can make certain idealized assumptions to compute the frequency as a function of angle of tilt; as the plate loses energy through friction, the angle of tilt will decrease and this will affect the frequency.

The problem is known as "Euler's disk", and a detailed analysis of the motion is given on this page - the conclusion is that the rate of rotation as a function of angle $\theta$ is given by

Which makes sense given our observation that the rate of wobble goes up as the plate settles down.

The damping is a difficult question - according to wikipedia the problem was addressed in a Nature article by Moffatt, who showed that the spinning time is indeed finite, and scales with the third power of the initial angle. It's not clear to me whether that is the definitive answer - there is some disagreement on whether the dissipation is due to viscous effects or rolling friction.

14
What is the physics of a spinning coin?

4
Calculate stainless steel pole necking limit
3
Constant of motion
0
Periodic motion, Rotatory motion, and uniform circular motion, are these same or should be considered different?
1
Simple harmonic motion as projection of circular motion
0
Oscillatory Motion and SHM
1
In what sense is the equation of motion of a damped oscillator not time-symmetric?
0
Definition of simple harmonic motion (SHM) and instantaneous SHM