Why can't leptons interact with the strong nuclear force?

So if I understand correctly the strong nuclear force is mediated in the following way:

However, electrons do not interact with gluons or pions. But that doesn't make sense, since a pion could smash into an electron, right?

The strong force has each nucleon made up of three valence quarks and a quark antiquark gluon sea holding everything within the nucleon ( proton or neutron) , it is the Quantum Chromodynamic force in the standard model of particle physics

These strong nuclear forces are modeled by pion exchanges between nucleons and are attractive , binding the nucleons into the nucleus. These pion exchanges are a phenomenological model where the pions are virtual, off mass shell carriers of the spill over strong forces.

The dimensions of the nucleus are of order Fermi. The orbitals of the electrons occupy a very much larger space, order of angstroms where 1A is 100.000 fermi 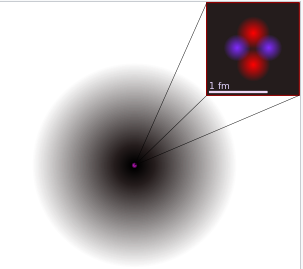 A figurative depiction of the helium-4 atom with the electron cloud in shades of gray. In the nucleus, the two protons and two neutrons are depicted in red and blue. This depiction shows the particles as separate, whereas in an actual helium atom, the protons are superimposed in space and most likely found at the very center of the nucleus, and the same is true of the two neutrons. Thus, all four particles are most likely found in exactly the same space, at the central point. Classical images of separate particles fail to model known charge distributions in very small nuclei. A more accurate image is that the spatial distribution of nucleons in a helium nucleus is much closer to the helium electron cloud shown here, although on a far smaller scale, than to the fanciful nucleus image.

All the action with pions falls off at the volume of the nucleus, because it is a Yukawa potential that simulates the strong force, falling exponentially.

So, even though the pions may be charged ( depending on their internal interactions with the protons and neutrons) The probability of the electrons occupying the same space time coordinates with the virtual pions is small, and the electromagnetic interaction of a virtual pion in the nucleus with an electron is further depressed by the difference in the coupling constants, because two electromagnetic vertices enter, which gives another depression of probabilities of (1/137)^2.

So the electron does have a very small probability of scattering off some charges in the nucleus, but it is very small. At that level, in my opinion, the pion exchange model should be given up and the individual quark contents of the nucleus considered .

The exact origin of the strong force (holding compound atomic nuclei together) is not yet a completely settled matter. Some authors (Robert Oerter) attribute this force to the exchange of virtual mesons between protons and neutrons (as in the original theory of Yukawa), while others (Frank Close) claim this old model has been superseded by the modern theory of quantum chromodynamics (QCD), and attribute the binding of nucleons to a magnetic analog of the color charge, originating in the exchange of gluons between quarks (theory of Gell-Mann). Still others (Nicholas Mee), think both gluons and mesons play a role.

In any case the electromagnetic interaction will have a very small probability and be difficult to disentangle .

There exist electron capture nuclear reactions which show that there is a probability overlap, but whether with virtual pions or direct quark electron interactions is not clear as far as I know.

Interactions between fundamental particles, or bound states in the case of pions, cannot be understood by thinking only about collisions between massive classical objects, such as billiard balls.

Your observation would be one of numerous problems with a billiard ball model of elementary particles.

In fact, leptons just don't interact via the strong force. We don't observe leptons participating in strong interactions and so we make sure that they cannot in our mdodel of elementary particles, the Standard Model.

There is some hope that one day we'll understand why particles interact in this way, perhaps from a so called grand unified theory. At the moment, we simply make leptons singlets under the strong interaction - this is a fancy way of saying, mathematically, that they don't feel the strong force.

Regarding the interaction with an electron, if a singlet gluon field existed (U(3) instead of SU(3)) it would propagate freely with a strong interaction, but might also interact with leptons?

Not the answer you're looking for? Browse other questions tagged particle-physics standard-model quantum-chromodynamics strong-force leptons or ask your own question.