Which is more correct - a changing $B$ field induces a current or an electric field?

The example in the book:

A line charge λ is glued onto the rim of a wheel of radius b, which is then suspended horizontally, as shown in Fig. 7.26, so that it is free to rotate (the spokes are made of some nonconducting material—wood, maybe). In the central region, out to radius a, there is a uniform magnetic field B0, pointing up. Now someone turns the field off. What happens? 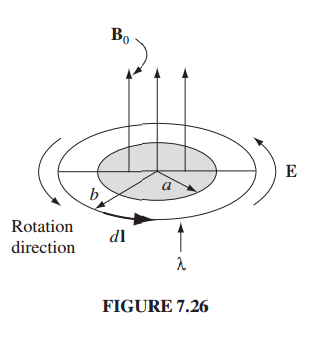 My solution: By looking at the equation $\epsilon = -\frac{\partial \Phi}{\partial t}$, we see that the change in flux will cause an emf. So then I thought that maybe I should say that if the $B$ field in the $+z$ direction stopped, then nature will create a current in such a way as to cause a $B$ field in the opposite direction. So this tells me that the "pretend" $B$ field will point downwards and create a current in the $-\phi$ direction. If the current moves in this direction, then the wheel will spin in the opposite direction.

So I get the same answer as the one in the book, but I think my reasoning may be off. Could someone point out the parts of my interpretation that were wrong?

Just try to re-use your approach in the following modified setup and you will see why it is best to go with the direct approach ("changing magnetic field induces electric field and the charges interact with electric fields - attracted or repelled; they feel the force!"). Modified setup: The wheel is fixed and cannot rotate!

If you still would like to stick with your approach even in this scenario, you may like to read a little bit about displacement electric field and/or current.