Actually, there is another building which collapsed in 911. It is the No.7 building, with 47 floors, not hit by an airplane.

All the three buildings collapsed in a very regular way.

Frankly speaking, I find this weird. Look at the remains of the old buildings around the world. Generally, some part collapses and some part remains. That is, the symmetry should be broken. However, the symmetry is maintained for all the three buildings.

Is there any scientific paper numerically simulating the collapsing processes?

Look at the remains of the old buildings around the world.

Find me the remains of an old 47-story building, and I'll take a look. The wall of a 2-story castle might have parts that are still standing because it didn't have another 45 stories come crashing down on top of it.

Just to be clear: it's not at all weird that a building that burned for almost 7 hours with little firefighting (and some help from diesel tanks) collapsed. So the fact of the collapse is not weird in and of itself.

But in fairness, details of a collapse may — in principle — be weird. Physics, in the context of this site, doesn't have a lot to say about your question, since you're really asking about something that depends very sensitively on engineering and details of how things were arranged in some particular building years ago. For example, engineers will do a better job of explaining how heat weakens steel, even well before that steel melts. They'll also do a better job of explaining how heat expansion will deform structures, straining the connections between structures, and how those connections will fail.

In fact, engineers have done exactly that. So the answer to the only question you actually asked is: yes. NIST did a bunch of computer simulations, including simulations of the fires and the collapse, and testing of alternative hypotheses including the intentional use of explosives.

But there are some topics that are important in physics that have some bearing on your question. All of these arguments go (at least) double for each of the Twin Towers, so I'll focus on the best-case scenario for skepticism, which is the 7 WTC building.

Even basic physics has something important to say about building collapse: gravity pulls down. It doesn't pull some things off to the side randomly. It doesn't pull harder on some types of matter than on others. It just pulls down. And when you've got 47 stories worth of matter that have started to collapse, that's a lot of momentum directed downward, so the rubble is going to be concentrated in an area below where it started.

And most of it started from very high up, so it had a lot of potential energy when it started to fall, and almost as much kinetic energy when it hit the ground. Judging from the masses of other skyscrapers, this one probably weighed several tens of thousands of tons. Standing about 600 feet tall, this means that the initial gravitational potential energy would be several times $10^{10}\,\mathrm{J}$, which is apparently about as much energy as the largest non-nuclear bombs ever produced. So when all that stuff hits the ground, it's kind of like a really huge bomb going off. And that has a tendency to create some chaos and destroy any walls on lower floors, for example.

Of course, that's just the energy; remember that momentum matters, too. One way in which the collapse really isn't like a bomb is that bombs usually explode with a roughly spherical momentum distribution. That is, the momentum of any little piece of the exploding stuff is directed more-or-less straight out from where the center was before explosion. On the other hand, when this building fell its momentum was basically all directed straight down — because of gravity.

Symmetry is obviously an important topic in physics. I don't know how you're defining symmetry but I don't see a lot of it here: 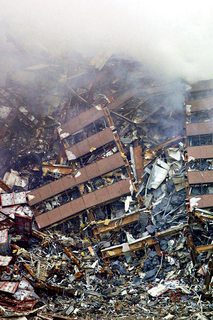 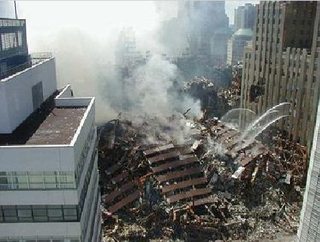 I just see a pile of rubble that is several stories tall, with piece sizes ranging from dust all the way up to large slabs of the side of the building (presumably from the very top). If you're looking for a nice bit of wall that's left standing from a bottom story, I might have said to look under the several stories of rubble — except that we should expect it to have been destroyed by the energy of everything that fell onto it.

Also note the central-limit theorem, which I'll summarize here as "when you take a large number of measurements, you get a smoother distribution where individual measurements are not noticeably outside the range of other measurements". For such a large building, there are just lots more pieces of rubble averaging things out — the sizes and positions of individual pieces of rubble, for example.

The precise way an object fails is a very complicated issue. For example, it could topple over as one more-or-less intact piece falling off to the side. Or it could crumble like a house of cards. The reason a particular systems fails in one way versus another depends very sensitively on many details of the system. I'll get to those details below, but first I'll point out the basic physical principles involved.

In physics, we simplify problems, and I think a fair simplification of this problem is to pretend that the upper part of the building is one block, and it gets dropped from a height of one story onto the lower part, which is another block. (Note: this is surely a terribly inaccurate model, but we'll use it to discuss the basic principles.) In order for the building to topple, that lower part has to be strong enough to do two things. First, it has to be strong enough to not get squished when you drop the upper part onto it, at least for a moment. Second, during that moment it has to be able to provide a lateral force to push the upper block over. Now, it doesn't matter how this force comes about; the ends of the blocks may be slanted so that gravity does the work, or whatever. But this force has to be huge because we're talking about pushing a big chunk of a building out of the way. So at this point, your question reduces to: "why couldn't the lower parts of the buildings supply the necessary sideways force to topple instead of crumbling?" I don't know, but I'll point out that a collapse would move pieces of the building's structure out of alignment, and they just weren't designed to handle anything beyond a certain amount of misalignment.

If you want more detail than that, you get out of what we usually call physics, and into what we usually call engineering. (You don't hire physicists to design your skyscrapers; you hire engineers.) An engineer would need to know exactly where all the beams and trusses are, how strong all the joints are, how the connections behave when the surrounding pieces aren't in their correct places, how fire affects all of the above, etc. But the engineer still wouldn't have time to figure out what would happen, so they'd put all those things into a computer and simulate it — just as the original question suggested.

And that's precisely what NIST did. NIST's simulations required a lot of variables. I'll point out this video, which is a very simplified simulation, and shows what happens when you vary the parameters of that simulation. By changing parameters, you can get anything from the whole building toppling over like one big toy, to the whole thing collapsing like a house of cards. The correctness of the results depends completely on the correctness of the values of the parameters you choose. You might disagree with the values of some of the choices NIST made in its simulation. And maybe you're even right. We can't answer such questions on this site. That's more than just physics. But one thing you must not do is to just say "it should not collapse in a symmetric way". You need evidence.

Finally, if you're still not convinced, just keep using the scientific method. I know of one hypothesis that explains at least some of the observations: fire burn; heavy thing goes down. If you're dissatisfied with this explanation, all you have to do is show in what ways the observed data are not consistent with this hypothesis.

You also get to develop your own alternative hypotheses to explain the observed data. Is there some motivation someone might have to specifically scatter the rubble in a "symmetric" way? Is there some mechanism by which this scattering might happen? For example, I suppose some might suggest that explosives were used to initiate the collapse. (Note that this is one of the scenarios NIST investigated, before concluding it was not consistent with the evidence. But it's okay to be skeptical of the government.) Would that explain whatever symmetry you feel you see in the rubble? Would explosives on one or several levels be able to more uniformly scatter rubble from the 40+ stories that weren't directly exploded? Does this hypothesis have something more to offer than the fact that 47 stories of building crashing to the earth has far more energy than most bombs? Does it explain some piece of data more effectively than other hypotheses?

This is how science is done. Skepticism is good; intransigence is not.

Not the answer you're looking for? Browse other questions tagged newtonian-mechanics material-science or ask your own question.

6
What properties do you need for building a tower?
0
Raindrops on a fence. Why a regular pattern?
5
Does Galileo's Tower of Pisa argument contradict quantum mechanics?
3
Regarding (regular) kinetic energy and rotational kinetic energy
1
What is the linear attenuation coefficient and how does it relate to interaction probability?