Can a rainbow be seen from above?

I saw this picture of a "rainbow from above" 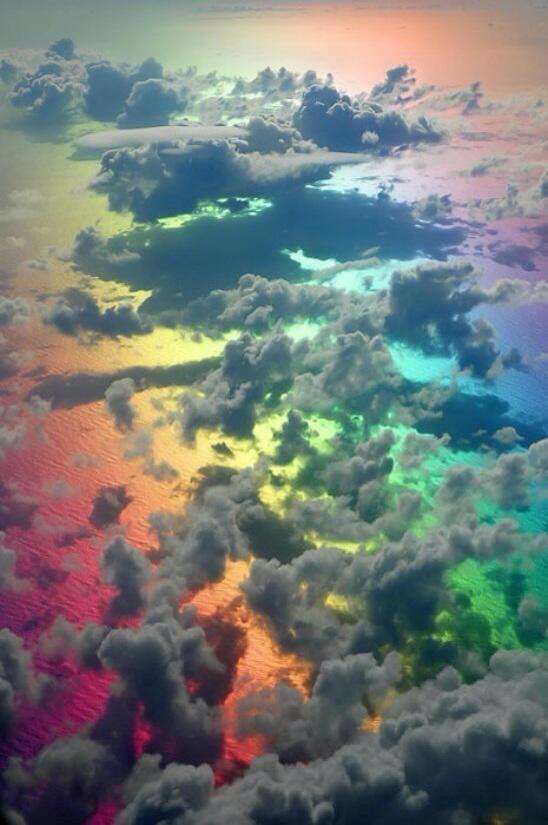 Based on what I understand about rainbows, some googling and my experience chasing them, if I saw one and try to fly above it, the phenomenon will disappear as I move forward and up.

Some argue with that logic citing rainbows on waterfalls seen from above, but in that case I believe the mix "water/light/angles" is not the same.

So now I have some doubts (small ones, but valid at the end), can I fly over a rainbow? (rain rainbow, from the clouds, on an airliner)

To see a rainbow you need to be looking directly away from the Sun. If there is a region of the atmosphere containing water droplets somewhere on a circle at 42 degrees around the shadow of your head, and there is direct sunlight on that region, then it is possible to see a partial rainbow coming from it. If the whole circle at 42 degrees is covered by water droplets, it is possible to see a full circle rainbow.

From the ground you will only see a semi-circle at best, when the sun is low in the sky and you are close to the rain storm. The rest of the circle is obscured by the horizon. You can see a full circle rainbow if you are above ground level and the water droplets cover a large enough area.

There is no reason why you cannot see a partial rainbow directly below you if there is a region of airborne water droplets there and if the Sun is at an angle of 42 degrees from the zenith. This is close to the situation of seeing a rainbow in the spray from a waterfall below you.

To see a full circle rainbow centred on the point directly below you the Sun would have to be directly overhead. As you point out, the clouds needed to produce rain are likely to obstruct the Sun from reaching the droplets.

So yes it is possible to see rainbows from above, but you cannot fly over them - they move with you, you can never cross over the arc. (If the Sun is moving overhead, the rainbow could move under you.) The rainbow will disappear if you move away from the region containing water droplets.

However, your photograph is not a rainbow. It can be explained by polarization and interference (instead of reflection and refraction for the rainbos). Light reflected from the surface of the water is partially polarized (fully polarized when reflected at the Brewster angle - $53^{\circ}$ for water). The pre-stressed nature of the airplane's plastic window makes it birefringent. Light travels at two different speeds through the window, depending on its polarization. This results in interference between the two polarizations of light emerging from the window, which can be detected with a polarizing filter on the camera or in front of the eye : different colours are in phase at different angles from the observer.

The spectrum in your photo is far too broad to be a rainbow. Compare with the following, also photographed from the air. The sharpness is due to larger drops at this altitude. 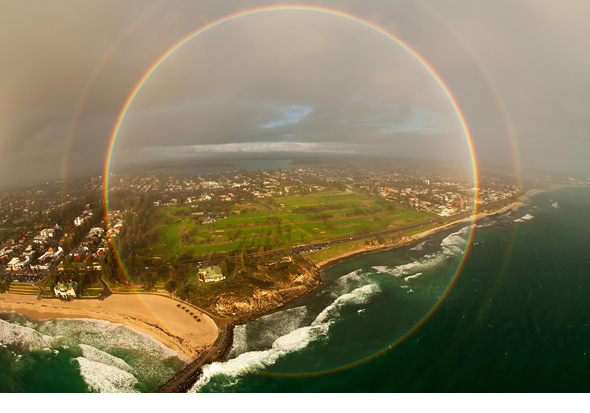 Not the answer you're looking for? Browse other questions tagged visible-light reflection refraction atmospheric-science wavelength or ask your own question.

0
Colors in the secondary rainbow reverse of that in the primary rainbow
0
The color purple in a rainbow
1
Why is a rainbow curved in shape?
0
Why can the blue colour in a rainbow be seen?
1
Why does purple appear in a rainbow?