The two magnet pairs $N_2$ and $S_2$, $N_1$ and $S_1$ attract each other respectively which causes the wheel$_1$ to move in the clockwise direction and wheel$_2$ to move in the anti-clockwise direction. The rest of the magnets does not produce any effect because they are shielded by a magnetic screen. The continuous rotation of wheels can be used to run a turbine which can produce energy.so energy can be produced. 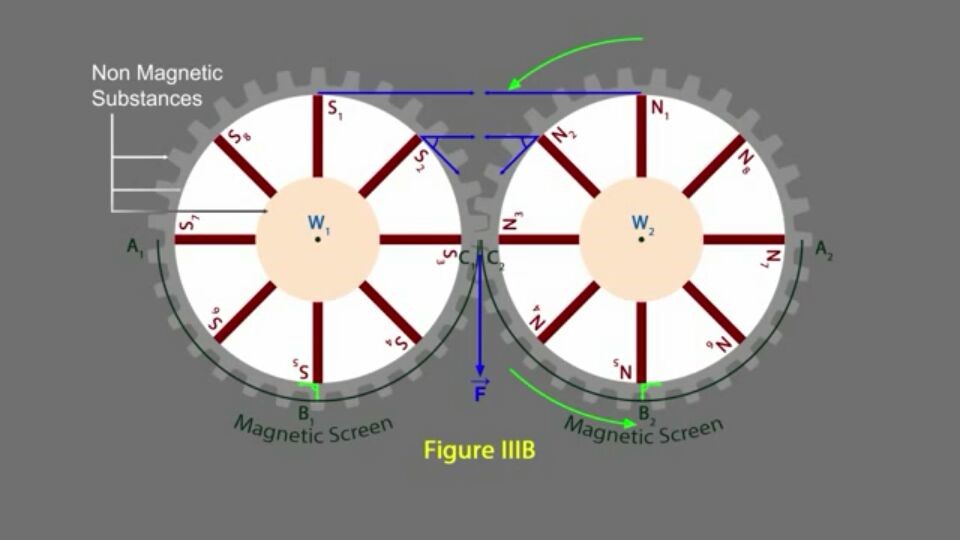 Where the iron plates join near N4 / S3, conflicting south and north magnetic fields would be induced. These would pretty much cancel each other out. So the screens in the central location won't attract the magnets that are moving towards them, N2 and S2. It would be tricky to do all the arithmetic involved, but the sad news is you would end up with no net force on the two rotating wheels.

To put it simply, at max it can execute SHM due to the forces getting balanced . But that too will stop considerering friction plays a role.

Not the answer you're looking for? Browse other questions tagged energy energy-conservation perpetual-motion or ask your own question.

26
What prevents this magnetic perpetuum mobile from working?