Can massive particles be seen as soliton solutions?

I wonder if the common relativistic wave equations contain a sort of soliton solutions, which might be considered as particle localisations.

There are popular Skyrme-like topological soliton models especially of baryons and nuclei, interpreting topological charge as baryon number. Here are some nuclei diagrams from https://www.sciencenews.org/article/nuclear-knots-skyrmions-could-unravel-mysteries-atoms : 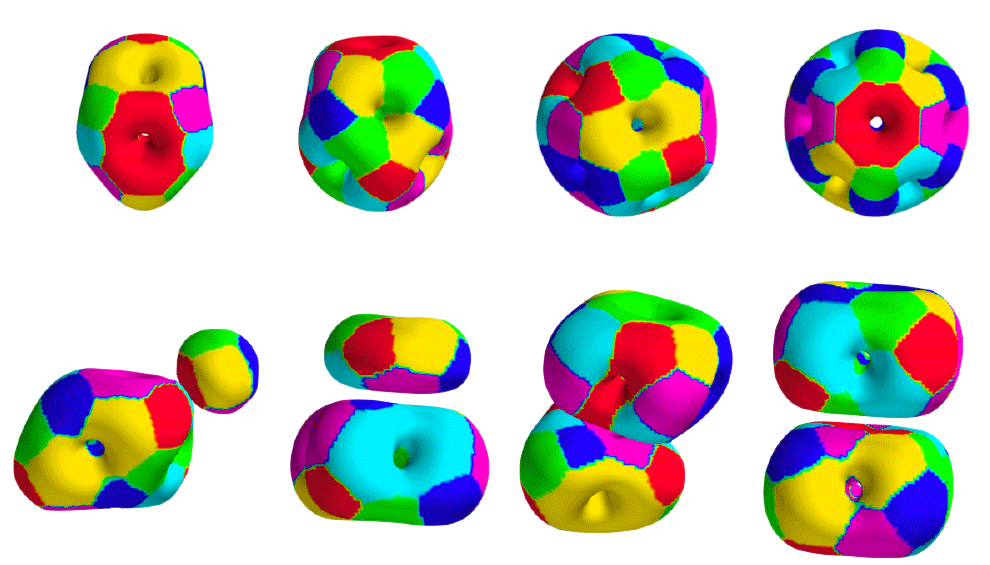 Interpreting topological charge as electric charge instead, we can derive charge quantization. Gauss-Bonnet theorem can be reformulated that integral of field's curvature over a closed surface gives topological charge inside this surface. Hence interpreting curvature of some vector field as EM field, Gauss-Bonnet theorem becomes Gauss law, which finally allows only for integer charges like in nature - leading to Maxwell's equations with built in charge quantization, see e.g. Faber's model of electron, slides.

However, not to exceed 511keV electron mass with $E\propto r^{-2}$ electric field alone, such infinite energy field of perfect point charge requires deformation in femtometer scale. In contrast, there is a belief that electron is much smaller. However, asking for experimental evidence for this belief, requiring to exceed 511keV mass by energy of electric field alone, turns out it is based only on fitting parabola to two points in 1988: Experimental boundaries for size of electron?

Not the answer you're looking for? Browse other questions tagged quantum-field-theory particle-physics solitons or ask your own question.

11
Experimental boundaries for size of electron?

14
Could this model have soliton solutions?
1
localization of wave or particles
19
Soliton Moduli Spaces and Homotopy Theory
6
About solitons, what is the difference between kinks and vortices?
5
Link between integrability and soliton solutions
1
Solutions of relativistic wave equations compared to classical wave functions