How does the Hertz Oszillator create radio waves?

In his proof of the existence of radio waves Hertz used the setup depicted in the following figure: 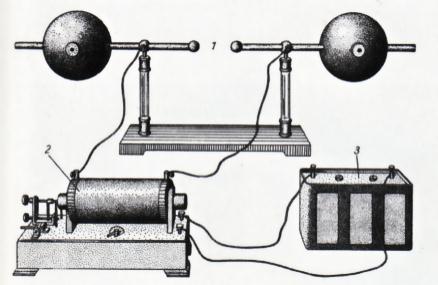 A sparc is created at regular intervals when the induction coil (2) creates a potential difference high enough to cause the sparc.

Wikipedia describes the process as follows:

Hertz's first radio transmitter: a dipole resonator consisting of a pair of one meter copper wires ending in 30 cm zinc spheres. When an induction coil applied a high voltage between the two sides, sparks across the center spark gap created standing waves of radio frequency current in the wires, which radiated radio waves. The frequency of the waves was roughly 50 MHz, about that used in modern television transmitters.

How does the process work by which radio waves are created when a sparc passes the gap?

When the spark occurs between those two spheres, air gets ionized due to the high value of electric field, due to this electrons travel from an area of low potential (-ve side of battery) to a region of high potential ( +ve side of battery ) but they travel through air, and when they do that they are accelerated for a very short time, and due to this acceleration electric flux in the region surrounding it changes continuously and this induces a magnetic field, and then due to that changing magnetic field, an electric field is created, and both changes travel in the form of an electromagnetic wave, in this case a radio wave because Hertz arranged his voltage parameters in such a way that the frequency of that oscillation matched with that of the radio waves.

Not the answer you're looking for? Browse other questions tagged radio or ask your own question.

2
How radio waves penetrate through buildings?
2
Radio waves within an atom
2
How does repeater amplify the radio signals?
2
What makes radio waves refract?
2
Am I absorbing radio waves?
0
There is no reverse flow of energy in a mismatched transmission line, is this correct?
1
How is information transmitted by radio waves (how radios work)?
0
Nuclear Reactor Meltdown vs Radio Waves
0
Radio waves and walls