Visual interpretation, on the Bloch sphere, when Hadamard gate is applied twice

On the other hand, $H^{2}=I$, where $H$ is the unitary matrix corresponding to the Hadamard gate and $I$ is the identity matrix.

If we do the rotation corresponding to the Hadamard matrix twice, then based on $H^{2}=I$, we would come out to the original situation, right? But, somehow, I can not see that. Could someone shed some light on this problem?

Here I give some additional analysis to Craig Gidneys answer. The Hadamard gate indeed can be subdivided into two individual rotations, as suggested in the initial question. However, every single qubit gate can also be described by a single rotation on the Bloch sphere. For the Hadamard gate, this is a rotation around the axis (rho, elev, azim) = $(1, \frac{\pi}{4}, 0)$. The rotation axis is drawn as a black arrow in the image. 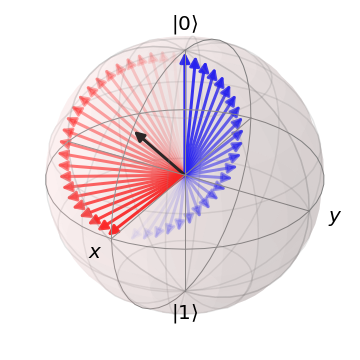 The image can be resimulated with python and the toolbox qutip.

The Hadamard operation is a 180 degree rotation around the diagonal X+Z axis of the Bloch sphere.

Note that quantum operations have a global phase in addition to the rotation part, so whether you get an exact equality between the operation matrices will depend on that. For example, $X \cdot Y^{1/2} = H \cdot \sqrt{i}$ instead of just $H$. Global phase only matters if you start applying the operation conditional on other qubits.

It can be nice to represent things geometrically. We can represent qubits using vectors, as I'm sure you know. So let's start with a qubit in the $|0\rangle$ state, or in the state $\begin{bmatrix}1\\0\end{bmatrix}$. We can graph this as 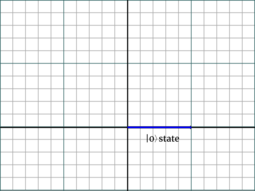 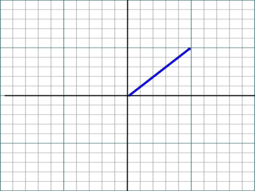 Hopefully this helps; if it doesn't, let me know and I'll try to think up another way to picture it.

Before starting I should mention I am using Craig Gidney's tool and some screenshots from it, quirk, which is definitely worths to be checked as himself also has left an answer here, now here is my understanding:

Lets start with some initial state on quirk so we can have an illustrative perception on whats going on:

This is just some random qubit state I've made using combination of three gates. What happens if we apply Hadamard to this?

Well this is combination of "rotation of the sphere about the $\hat{y}$ axis by 90 degrees, followed by a rotation about the $\hat{x}$ axis by 180 degrees" but lets tears this apart using available simpler gates and the definition your are interested:

Identical to applying Hadamard gate itself, we applied $Y^½$ then X. It may not be obvious how we reached from our input to this, so have at look at Y rotation animation and X rotation at quirk. Before continuing having look at these also would be useful I guess:

Now I guess here is the interesting part, if we apply $Y^½$ again we will reach to this:

But what does this mean? This is equal to X rotation of the input state:

With all these preparations I guess this is the point, if you rotate a sphere 180 degree just by an axis, equal rotations on other axises before and after first rotation will cancel each out and all you need to reach to the initial state is to apply the first axis 180 degree rotation again, just like double applying Hadamard.

In a sense it is like doing rotation against an actual mirror, on the global coordination the real rotation is different from the rotation happening on the mirror (in here $Y^½$ gate) but there is only one reality. Trying rotating an actual ball against a mirror can help to the understanding :)

And of course this is after applying two Hadamard consequently which is equal to the our initial state:

Here is the quirk's model I've prepared for this answer and can be used and tweaked for getting better understanding.

At the end, I should mention that Hadamard itself can be written as a one step 3d rotation, something like rotate(pi/2, 0, pi) but one step 3d rotations are less intuitive I guess and two step one axis rotation are easier to understand that's why you've found that quote and it is perhaps better to describe it in this way.

Not the answer you're looking for? Browse other questions tagged quantum-mechanics quantum-information bloch-sphere or ask your own question.

2
Error estimate for finite approximation of Hadamard gate from two rotations
0
Why Do Multiple Hadamard Gates Return to Base State?
1
How do I visualize a stepwise rotation on the Bloch Sphere using $SO(3)$ and $SU(2)$?