We now know that the answer to your question is yes. In 2020, a group (Pastor-Marazuela et al. 2020) observed the notable (periodic) repeating source FRB 20180916B with both LOFAR and the Westerbork Synthesis Radio Telescope. Thanks to LOFAR, they detected nine separate bursts in the range of 120-190 MHz - doubly interesting because the presence of low-frequency emission implies that the periodic FRB must be in a relatively "clean" environment, so to speak, without the frequency-dependent absorption characteristic of certain models for periodic FRBs.

Of course, this doesn't rule out those models for all FRBs - it's entirely possible that absorption has, to some extent, limited low-frequency absorption from other known sources. But it does indicate that we should be able to detect similar emission from other FRBs in similar environments to FRB 20180916B's. While I'm not an FRB expert, I have yet to find anything to indicate that there was ever any significant doubt about LOFAR's ability to detect them. The fact that there is so little we know about FRB progenitors means that low-frequency signals aren't unexpected, per se, from a theoretical point of view.

First, thanks for asking the question, as I learnt a lot that I was curious about.

This source: Fast Radio Bursts (Also image source) says that the source of the first FRB was observed across a 288 MHz radio band, with a dispersion measure of the radio burst was 375 $cm^{-3}$ pc 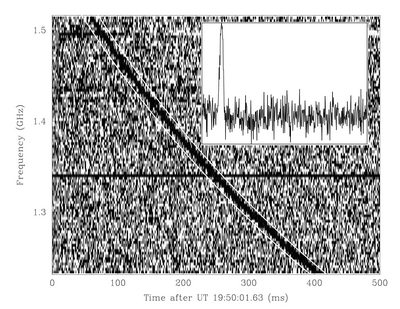 Wikipedia has a reference of a 700 MHz burst, but as LOFAR is optimised for maximum sensitivity around 250 MHz, it probably would not have shown up. But the the consensus seems to be that there are lots of FRB sources, so possibly LOFAR could detect FRBs in the future, if they don't all derive from high energy sources.

Not the answer you're looking for? Browse other questions tagged astronomy telescopes radio or ask your own question.

8
Where can I find information for how to create amateur radio telescope?
25
How do we know that these radio bursts are from billions of light-years away?
4
Radio vs optical telescope imaging
3
Antenna Array Radio Telescope
6
How did Jocelyn Bell aim her radio telescope (phased array)?
18
Why put a radio telescope in space instead on the Moon?
0
How is the “intensity” of a fast radio burst measured?