This following text (which is page 301 of a book called A History of Aerodynamics: And Its Impact on Flying Machines) seems to say that you must increase air pressure (or similar) to accurately model aerodynamics of a small-scale model: 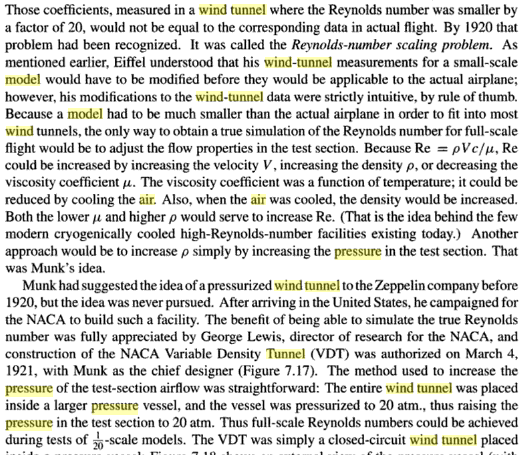 I'm semi-literate in Physics (undergraduate-level some decades ago, but I don't readily understand the Wikipedia article). Could you please explain why this phenomenon is so, preferably with an intuitive or verbal explanation, not only mathematical formulae?

And, perhaps more importantly, I think it's saying that if you're using a 10:1 scale model (e.g. a 7 metre model of a 70 metre airplane) you should test it at 10 atmospheres of air pressure to get realistic results. Given that it's 10:1 scale what should the wind speed be in the wind tunnel? Should it be 1000 km/hour, just like the real thing? Or should it be 100 km/hour to reflect the fact that distances are scaled down by a factor of 10?

The Reynolds number is defined as:

The trick in defining a Reynolds number is picking appropriate scales for the problem. $\rho$ and $\mu$ are set by your operating conditions while $U$ and $L$ are chosen by the practitioner. There are conventions to choose of course, for example when testing a wing, the $U$ is the freestream velocity and the $L$ is the chord length (size of the wing normal to the flow).

Physically speaking, when the Reynolds numbers of two configurations are equal, the flow physics is roughly equivalent. I say roughly because it isn't the only non-dimensional number to relate -- there's also Mach number, Prandtl number, etc etc.. But, depending on the physics of interest, matching Re may be good enough.

Generally speaking, the only way to change density without changing viscosity is to increase pressure. So, if you want to keep working with an air tunnel for your scale model, you would need to increase pressure by a factor of 10 and that will make the Re match.

Alternatively, you could run the tunnel faster. But if your real velocity is, say, 100 m/s, making it 1000 m/s for your scale model will completely change the physics -- it is now supersonic. So you can't do that.

You could change the working fluid. If you run in a water tunnel, density is roughly 1000 times bigger. This, with the reduction of length by a factor of 10, means we still need to change something else. Viscosity also changes (I don't remember offhand how much), but let's pretend it stayed the same. That means we would also reduce our velocity by a factor of 100.

So, if our real problem is in air at 100 m/s, our made up water tunnel (with fake viscosity) using a 1/10th scale model at 1 m/s should have the same physics. Assuming the physics we want is inertial/viscous forces and not, say, heat transfer.