Double gyroscope: Can a spinning pencil tumble on only one axis?

Picture an object such as item 7 on this page .. http://en.wikipedia.org/wiki/List_of_moment_of_inertia_tensors

Call that the x axis and z is in to the distance. See diagram below.

We are in deep space. The object is 10 meters long, a couple inches diameter and weighs 100kg. 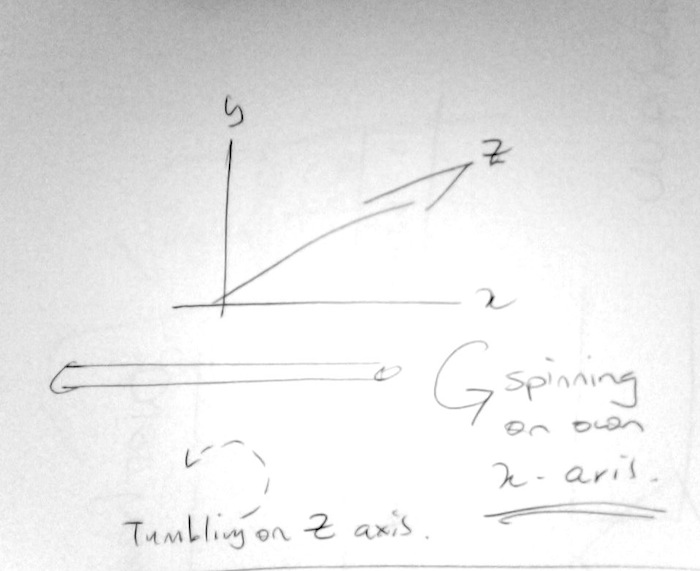 So it's spinning on it's own long axis, our x axis.

Now for clarity, we will refer to "All the points along the center of the rod" as ATPATCOTR.

So far it's only spinning on the x-axis. Looked at from any anywhere, it is of course obviously unchanging: Note that every ATPATCOTR is completely stationary, the coordinates x,y,z of every ATPATCOTR never change in any way.

To be clear, every ATPATCOTR now descibes a perfect circle in the XY plane, with z always zero.

BUT WAIT -- here's the question.

Now, if you actually try to do this, typically it will also wobble. What do I mean by wobble? Look at it from overhead, and it will be varying it's angle - note the second diagram. (ie, the angular velocity along the y axis is no longer zero - it goes back and fore a bit.)

It is no longer the case that ATPATCOTR make perfect circles (z=0), they are forming all sorts of weird spirals.

THE QUESTION -- in fact, quite simply, IS IT POSSIBLE in this universe, to have the object both spin on the x axis, and, tumble on the z axis, CLEANLY with NO rotation or angular velocity in the y axis?

In other words grab your pencil and throw it away from you, spinning it along it's length, but also make it tumble end-over-end a little through the air. In fact, can the tumbling motion be perfectly clean in one flat plane? Or is that actually impossible? (ie, you would have to use two glass sheets that forcefully retain the tumbling motion to be in one perfect plane only?

In other words, make a platonic pencil spin on it's length and lay it on a platonic frictionless table. Now make it additionally spin like a baton as seen from above. Is that in fact "impossible", i.e. it will be angry that the flat table is holding the baton-spin to one perfect plane and it will force against it?

In other words: http://www.youtube.com/watch?v=wfCgCXvw50A
it looks like (A) the board is spinning on it's own length, and, (B) slowly rotating on the z axis (using our diagram). Superficially (C) there's no rotation from overhead, rotation on the y axis. But is that simply wrong - if we observed closely there would be some rotation/wobble on the y axis also?

In other words, can you spin a pencil along it's length, and also have it tumble in one perfectly flat plane only? Or will there necessarily be "wobble", essentially some rotation or change of angle in all three axis?

In this universe can an object in fact spin in "two axis" only, or is that impossible? You can (I think!) have an object spin cleanly in one axis, but after that do you have to go straight to all-axis rotation? 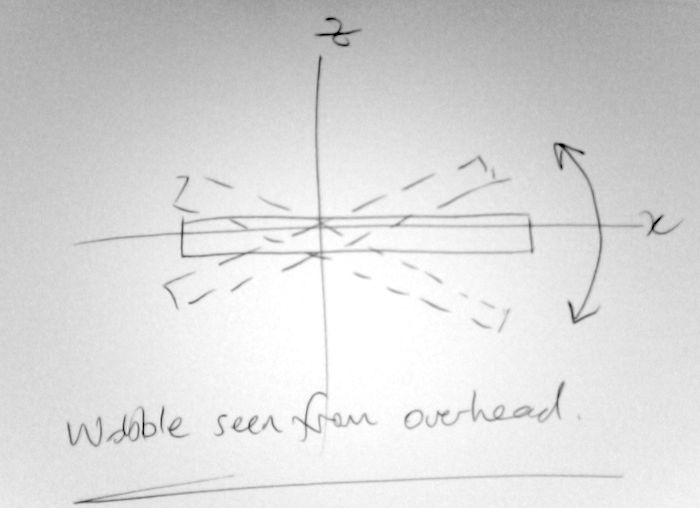 The body is rotating around two axis $x$ and $z$ So,the angular momentum along those direction get add up to $L_{resultant}$ which causes the rod to slightly dis-align from the $x$-axis as seen from the top along $y$-axis

In detail what happens is when we rotate the rod along $x$-axis and then apply a torque $\tau_z$ for small amount of time in $z$ direction which builds up the angular momentum in $z$ direction.By intuition we tend to think that the rod will continue spinning in $x$ axis and in the same time will rotate about $z$ axis.But that's not true because if rod rotates in $z$ direction then $L_x$ will change (in direction not in magnitude) without the application of any torque which violates the law of conservation of angular momentum.So instead of this ,the rod just tilts in the direction of resultant angular momentum(shown in diagram) and will remain until some other torque is applied. And moreover it will not wobble and will not have any angular velocity along $y$-axis since there is no torque in that direction. 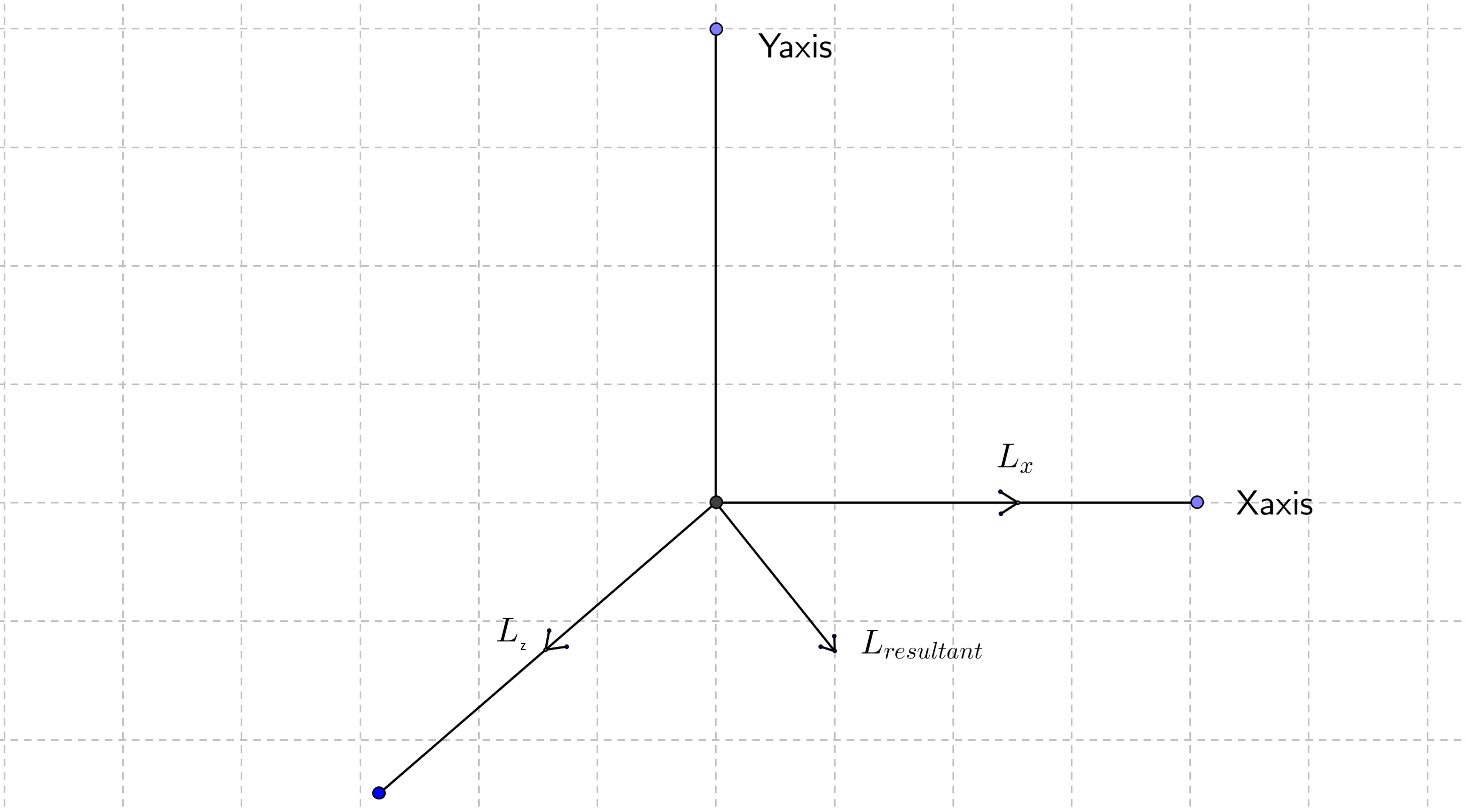 See this may be you will get better understanding.

On the other hand if you apply a constant torque along $z$-axis then $L_x$(lets call it $L_s$ where $s$ stands for spin) will rotate towards $z$-direction but now also it will not wobble.But if you somehow make sure to make $\tau_z$ always perpendicular to $L_s$(which is exactly the same case as gyroscope) then $L_s$ will try to chase $\tau_z$ hence rod will now have angular velocity $\omega _{pr}$($pr$ stands for precession) $$\omega_{pr}=\frac{\tau}{L_s}$$

And as your question, is it possible for a body to spin in $x$-axis and tumble in $z$-axis with no rotation in $y$-axis?
My answer is when you apply torque in $z$-direction it doesn't mean it will tumble (in the video, the wheel doesn't tumbled inspite of having a torque =$mgr$ ) instead it will have a angular velocity along $y$-axis $\omega_{pr}$.

Not the answer you're looking for? Browse other questions tagged angular-momentum inertia gyroscopes or ask your own question.

3
Direction of torque precession of a spinning wheel
1
Gyroscope bombardment
0
Do all black holes spin in the same direction?
5
How do objects change their axis of rotation?
10
Can a ball be struck to give it a spiral spin?
0
An explanation for the form of the spin component operator for a measurement made at an angle in the $x$-$y$ plane
3
Confusion about what happens when the rotating axis of a gyroscope is rotated