Estimating the yield of the Trinity Test using dimensional analysis

So essentially I'm trying to re-do what G.I. Taylor did to estimate the energy released by the Trinity Test using dimensional analysis. I understand all of the dimensional analysis aspects, I'm just a little confused on the estimation aspects. I know to estimate the radius of the shockwave from the picture at a certain time, then plug that into the formula I've derived and solve for E, but I've been given a 4 picture series of the blast and I'm not sure if I should just use one picture or take an average of the energy estimation at each of them.

The reason this is causing me confusion is that the energy estimates I get vary a little too much for my liking throughout the time series. A couple are very close to the actual yield, but another is half that, and the last is like 1/8 of it. Every example I can find online just uses a single picture to get their estimate, but I don't see why any one of the pictures would be inherently more valid than the others, and it would seem kind of cheap to calculate estimates for all and then just pick the one that's closest to the Trinity Test's actual yield.

I'm not trying to ask anyone to do my homework for me, I just want to know if there is a standard protocol for doing estimates like this (i.e. taking an average of the estimates from each picture vs. picking a random picture to base the estimate on vs. choosing the picture from the time we would expect to yield the most accurate estimate for some reason), and I can't find a solid answer online.

Since the energy $E$ of the explosion and the air density outside the fireball $\rho_0$ are constant, we find that the radius of the fireball should grow like $R\sim t^{2/5}$ if the function $g$ is also approximately constant. How good is this assumption?

The function $g(\pi_1)$ depends on $\pi_1$ and all factors in $\pi_1$ except time are constant. Thus, for very small range of times, such as the very initial stages of the explosion, this function will not change very much and will be close to it's value at $0$. Hence, it is reasonable to assume that, for small times, $g(\pi_1)\approx g(0)=\hbox{constant}$. 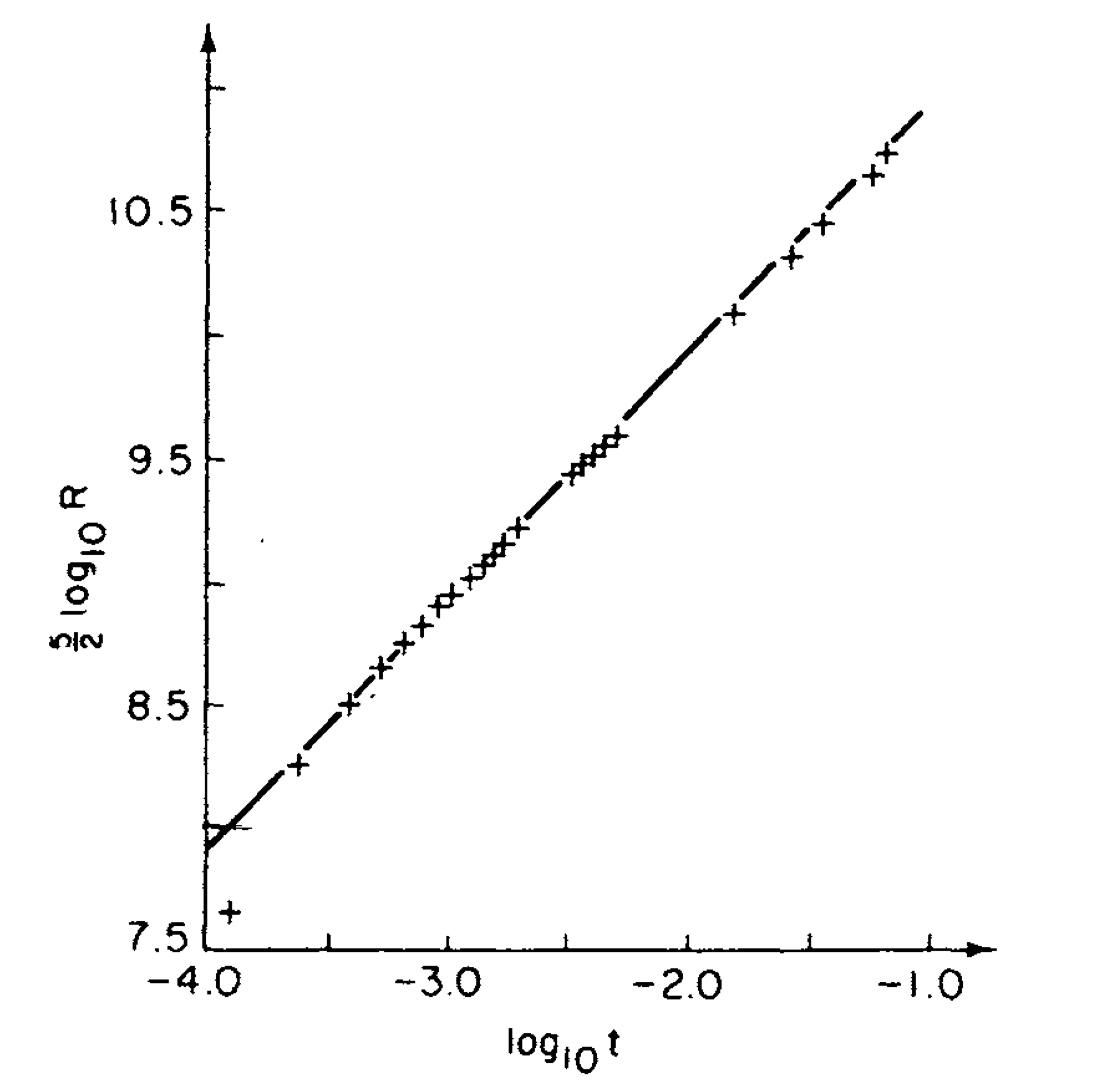 I got the picture from a textbook on differential equations by Bluman and Kumei.

This gives $E$ equivalent to $\approx 25$kilotons of $TNT$. The actual measured energy was closer to $20$kilotons.

26
Why does a nuclear explosion have directionality?
3
If we know the units of a quantity is it valid to write a formula just so that the units are dimensionally correct?
4
Estimate post-shock temperature of nuclear explosion
4
Integral of Sedov's self-similar solution to the spherical blast wave problem
4
Power of Shockwaves
1
What is a formula for calculate muscle strength for the size?
2
Sedov-Taylor blastwave resources
0
Using dimensional analysis to find pressure of a liquid given density and movement speed