Why is a neutron in free state unstable?

A neutron is a neutral particle which is merely some times more massive than an electron. What makes it so unstable outside the nucleus that it has a half life only of about 12 min?

How long is long?

So "half life only of about 12 min" is actually really a strange idea to most of your readers. 12 minutes is a very long time, atomically speaking! Like, the charged pions have a half-life of 18 nanoseconds, the uncharged one is 58 nano-nanoseconds (attoseconds). You might say "well those are mesons, not baryons like the proton and neutron," but actually the first new baryon ever discovered, the $\Lambda^0$, had a half-life of 0.18 ns and this was considered so strange (in the sense of being so much longer than expected!) that the newly discovered particle was thought to have a quality called strangeness and this eventually became the name of the relevant quark; it is still today called the "strange quark."

The neutron decays to the proton for a simple reason: a proton is made of two ups and a down, a neutron is made of two downs and an up, and the down quark is intrinsically more massive than the up quark. Now there is a subtlety: the vast majority of the proton's and neutron's masses comes from their strong-force binding energy via $E=mc^2,$ which is why they have basically the exact same mass when fully assembled, a little over 930 MeV. (An electron volt, or eV, is the amount of energy that an electron gains when it goes through one volt of potential difference; it corresponds to a certain mass after dividing by $c^2.$) But the up quarks in these particles are about 2 MeV lighter than down quarks are (we actually don't know the real masses 100%, but the story seems to be about right), and the point is that this ~2 MeV gap is big enough that even after creating an electron (0.5 MeV) and neutrino and accounting for the greater electromagnetic self-repulsion, the proton is still 1.3 MeV lighter overall. Lighter means lower-energy, which means the total energy is spread out more across the universe, and in some sense we're talking about entropy and statistics again.

You might wonder why this argument doesn't go one step further, to a particle with three ups. This particle exists and is called the $\Delta^{++}.$ However, this fact that "most of the mass is binding energy" comes back to bite us, because some of that binding energy, it turns out, lives in the spin configuration of the quarks that make up the nucleon. This comes down to the "Pauli exclusion principle": a down and an up-quark, being different particles, can be in "the same state" but two up-quarks must be "in different states". In the details, this exclusion principle takes the form that the up/down "flavor" configuration and spin configuration must either both be symmetric or antisymmetric, since the color-charge state is antisymmetric and the overall state must be antisymmetric. Well the up-up-up state of the $\Delta^{++}$ and down-down-down state of the $\Delta^-$ can't help but be symmetric; so the spin-state must be symmetric too, and the spin-symmetric state has a higher energy than the spin-antisymmetric state by 200-300 MeV. By contrast there are two (1u,2d) and (2u, 1d) configurations, the ones that are flavor-antisymmetric and spin-antisymmetric have total spin 1/2 and are the proton and neutron; the ones that are flavor-symmetric and spin-symmetric have total spin 3/2 and are the $\Delta^+$ and $\Delta^0.$ Anyway the point is that the extra energy which needs to be bound in this state to keep the extra spin in the system is very high, so that's why you don't see these particles in nature.

So neutrons are a higher energy-state than protons, and quantum mechanics says that if there ever is a lower-energy state, and there is any process which can transfer energy out, then eventually the system will come to be in that lower-energy state. But, this could take a while if the transfer-process requires more energy than the system has, in which case quantum mechanics has to "tunnel" through the higher-energy state which takes some time due to time-energy uncertainty. That's what makes this process take so long for neutrons; the only pathway involves creating a $W^-$ boson which eventually decays into an electron and an antineutrino, but the boson in the middle has a very large mass -- 80,000 MeV or so -- and there is therefore nowhere near enough mass to create one of these. QM has to tunnel through this $W$-boson state.

How does the presence of other nucleons stabilize neutrons?

On the flip side, when these baryons are within a nucleus, the attraction of the different baryons can create a force which "holds together" neutrons, in the sense that the decay of a neutron would increase the energy of the whole, formed nucleus. This actually occurs by the exact same mechanism that makes that $\Delta^{++}$ baryon cost energy, that Pauli exclusion.

So if you have dealt with atoms you know that two uncharged atoms will still "stick" to each other by the van der Waals forces, which just have to do with "even though the total charge is 0, there is still some charge-distribution structure here, which matters a lot at short distances." The nucleons within atoms actually have a very similar property even though the color charge is more complicated than the electric charge. Basically, these protons and neutrons are being held internally together with these gluons into color-charge-neutral particles; but they can still "stick" to each other through the strong force, generally by exchanging virtual pions. The pions are mesons: combinations of a quark and an antiquark with opposite color charges, so they end up being color-neutral as well. In this case the up-antidown meson is called $\pi^+$ while the down-antiup meson is called $\pi^-$ and there are two very short-lived $\pi^0$ mesons between them, up-antiup and down-antidown. These were predicted by Yukawa a long time before we knew anything about quarks: they were, in fact, our first jump down the rabbit hole! But anyway, there are these short-lived pions that "stick" protons and neutrons together at short ranges.

Now Pauli exclusion comes in and says "hey, these protons and neutrons are also identical spin-1/2 particles, so I demand that they be in different states." This picture is much more like the electron-shell model of the atom, there are some energy "shells" for the protons and an almost-identical set of shell levels for the neutrons: the proton levels are a little higher in energy because the electromagnetic force says that like charges repel. Imagine these are laid out side-by side, left column is protons, right column is neutrons. If a neutron wants to become a proton by emitting an electron and antineutrino, it may need to pay an extra "cost" if there is no corresponding proton state to the left: and those levels also see a non-negligible splitting based on spin due to a strong spin-orbit interaction. In fact these effects are already enough to keep a neutron together in the case of deuterium, one proton bound to one neutron by these pions. Add one more neutron, and this becomes weakly unstable tritium with a half-life of 12 years, add one more neutron and the result is severely unstable.

Actually there is a balance here where the energy gain from being able to "drop" down several energy shells can drive a nucleus with too few neutrons and too many protons to emit a positron (an anti-electron) in reverse-beta decay, turning into a neutron in order to "drop" a few shells down in energy. Those nuclei are very useful in medicine, because the positron then usually annihilates with an electron to produce two gamma rays going in opposite directions, and detecting these gamma rays is how the PET scanner works. So you say "drink this positron-emitting fluid!" and then you can map out with the PET scanner where all of these atoms have gone in the body.

It is a main principle of physical observations that everything goes to the lowest energy state, if it can. A neutron has an Mev more mass than the proton and it can decay to a proton through the weak interaction.

This is the Feynman diagram of the decay: 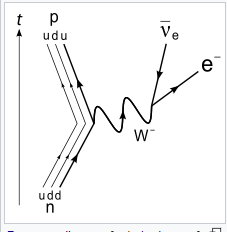 Note the virtual W. If real it has a mass close to 100 GeV, so it is very much off mass shell in the integrals . The two weak interaction vertices and the large off mass of the virtual W give the probability of decay of 15 minutes as observed.

Of course one must keep in mind that neutron decays explored and defined the weak interaction, and it would be circular if we did not have a plethora of other weak interactions which agree with the model as incorporated in the standard model of particle physics.

44
Why is the (free) neutron lifetime so long?
8
Why does the quarks binding energy add mass to nucleons instead of reducing it?
6
Is most mass from KE or PE?
5
Where does a hadrons mass come from
5
Why do neutrons decay after 6 minutes?
4
What sets the half life of unstable nuclei/nucleons?

67
How come neutrons in a nucleus don't decay?
44
Why is the (free) neutron lifetime so long?
3
Physical limit for the shortest possible half-life?
4
What sets the half life of unstable nuclei/nucleons?
0
What is the force at play in the emission of neutron out of Helium-5
2
Which properties of individual nucleons change depending on the nuclear environment?
1
What determines whether free neutron decay results in the production of a neutral hydrogen atom?
1
Why is a Hydrogen Atom the most stable state? Free Neutron decay?