Why do my boundary conditions not work out in a damped harmonic oscillator?

In one of the physics labs at our university, we have a steel "glider" on an air track. The glider is attached to a string connected to a spring at one end, and at the other end we have a string with a ball on the end. The string is looped over a pulley so that the ball hangs down. The track for the glider is horizontal. I've been trying to look at a theoretical version of this, and keep coming up with an answer that seems off to me and I was hoping someone might have some insight. In the real version, we pull the glider back (the ball comes upwards) and then let it go. The falling ball causes it to move forward with constant acceleration until the string becomes taught and then the spring now begins to stretch. This stretching spring begins to work against gravity eventually causing the glider to reverse direction and oscillate about some spot. I'm trying to model the motion beginning the instant the string becomes taught and the spring begins to stretch, so I'm calling that point $t=0$ s and $x=0$ m.

This results in the glider having:

I get a differential equation of the form:

Solving that with the $v[0]$ and $a[0] boundary conditions results in:

However, this gives you $x[0]=-0.0517349$ m, rather than zero. Similarly, using any two other boundary conditions causes the third one to be incorrect. I assume one of my assumptions must be incorrect, but I'm not sure what. I don't believe this is a result of rounding as I've tried solving it exactly in Mathematica and get the same result.

I originally came across this trying to model both the initial run up and the harmonic oscillation using a piecewise function and found that if I use the $x[0]$ boundary condition, my glider comes to rest at $x=0.4517349$ m rather than at exactly 0.4 m as I would expect from setting the force of the spring equal to the force of gravity on the ball. If I don't include damping, everything works out exactly as I would expect. Am I doing something wrong with my damping maybe? 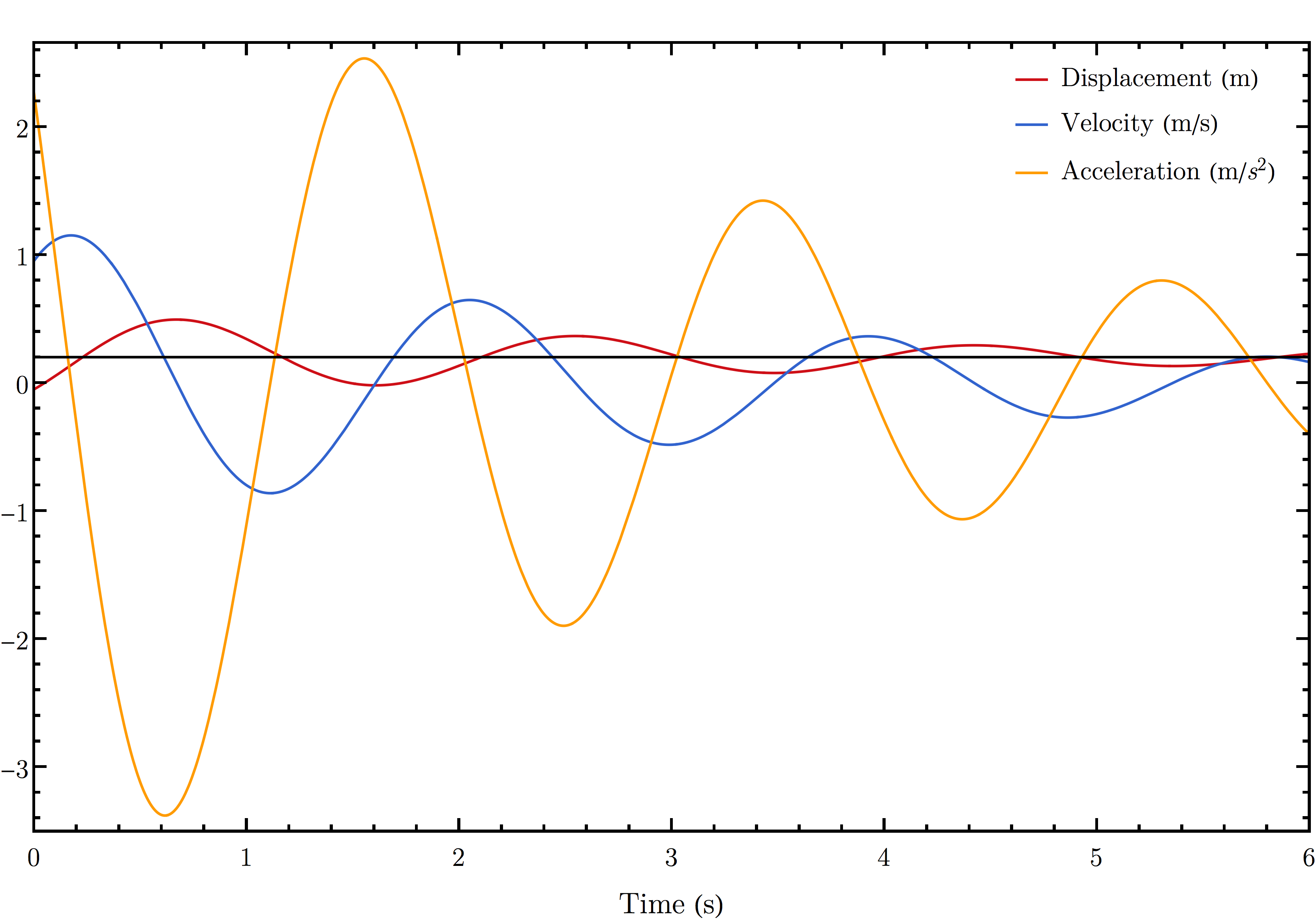 Plot of the damped harmonic oscillation beginning at $t=0$ s using the $v[0]$ and $a[0]$ boundary conditions. 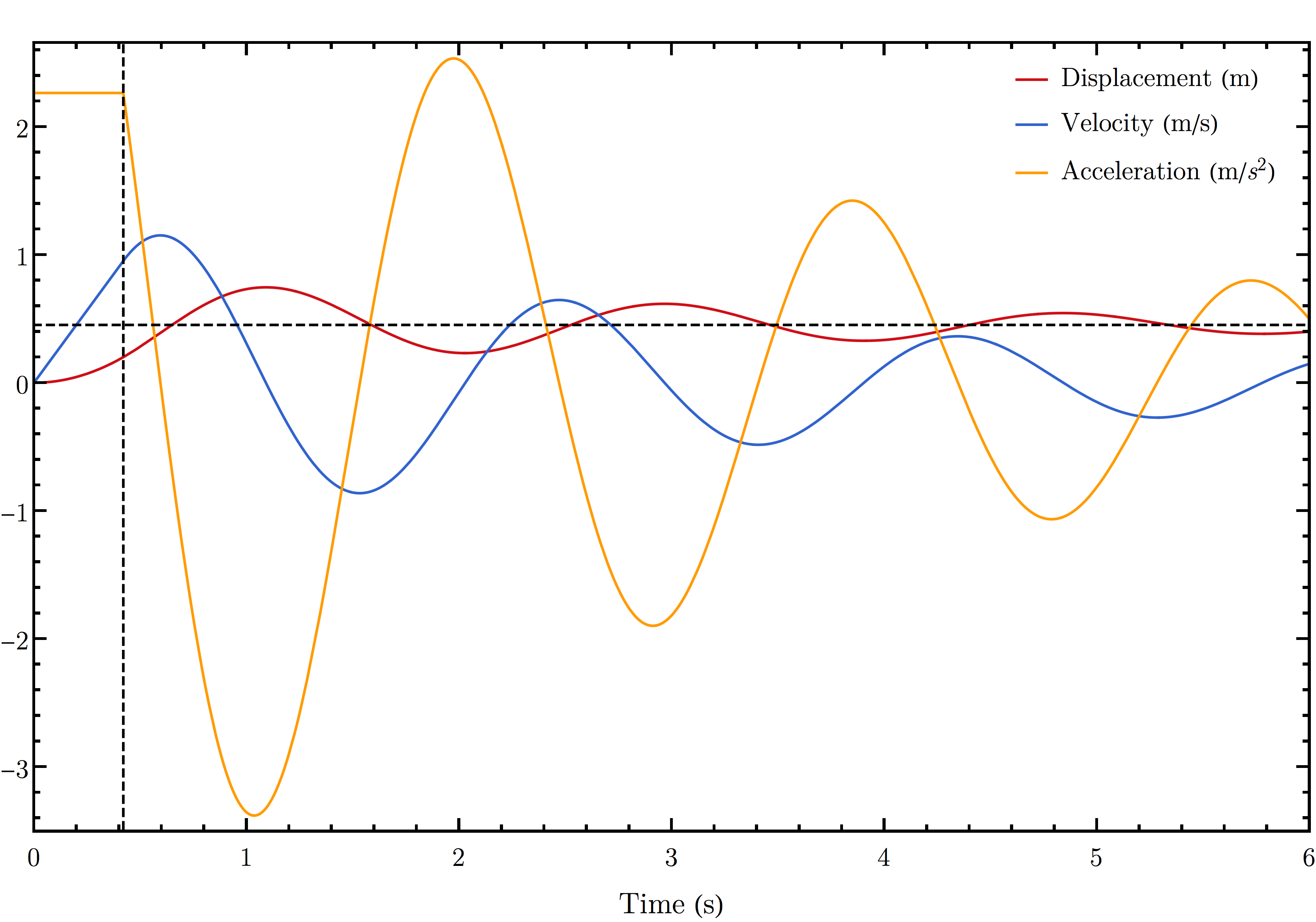 The differential equation damped simple harmonic motion is linear and second order, so you can only have two independent boundary conditions. You are trying to impose three - displacement, velocity, and acceleration.

Because your mathematical model is suddenly applying the damping force when $t = 0$, the acceleration will be discontinuous at time $t = 0$.

To understand physically why the acceleration is discontinuous, think about a simpler situation - for example dropping a mass vertically into a container of thick oil. It should be obvious that the acceleration is $g$ downwards before the mass hits the oil, but then suddenly changes to a different value because of the damping force applied to the mass by the oil. In fact, the new value is likely to be an acceleration upwards, not downwards!

The simplest solution is just to apply $x[0]$ and $v[0]$ as initial conditions to the damped motion. The differential equation will then automatically give you a consistent value for the acceleration.

You might like to try your model with no damping, i.e. $c = 0$, to convince yourself it works. In that case, the acceleration will be continuous at $t = 0$.

Not the answer you're looking for? Browse other questions tagged newtonian-mechanics experimental-physics harmonic-oscillator boundary-conditions or ask your own question.